Specialist valuer, Katherine Wright, reflects on the success of our May 2021 Five Centuries auction, where a world auction record for an object of its type was made for a 14th Century Gothic Ivory Casket at £1.4 million, and discusses the current market trends for traditional antiques and furniture.

Our most recent May Five Centuries sale was a particularly memorable event for me and all the team at Lyon & Turnbull. It featured a stellar lot, a rare French Gothic ivory casket, dating from the early 14th century and intricately carved with scenes from medieval tales. Discovered by our valuations team in an Aberdeenshire home, the history of the piece is documented in family genealogy and can be traced back as far as the 17th century. It was one of only nine known examples of such caskets, which are mostly in important museum collections such as the Metropolitan Museum of Art, New York, the British Museum, London, and the Victoria and Albert Museum, London. Following extensive specialist research and strong marketing of the piece, it went on to sell for an incredible £1.4 million including premium. This was not only a UK house record for Lyon & Turnbull, but a record price for any lot sold at auction in Scotland. It was truly wonderful to be involved in the sale of such a rare and exceptional work of art.

“I am absolutely delighted with the result for such an historically important and beautifully realised Gothic work of art. From the moment it came in to Lyon & Turnbull for research, our team knew it was something rare and special, and the enthusiastic reaction to it from collectors and museum professionals only re-enforced our beliefs. What makes it even more special for us is that it has been in the same Scottish family since the early 17th century and until it appeared in our catalogue it wasn’t known to exist. As auctioneers we all live for that ‘a-ha’ moment when a long-forgotten treasure comes to light, so this result is a career highlight. It was a privilege to be able to present it to the world.” - Douglas Girton, Head of Sale 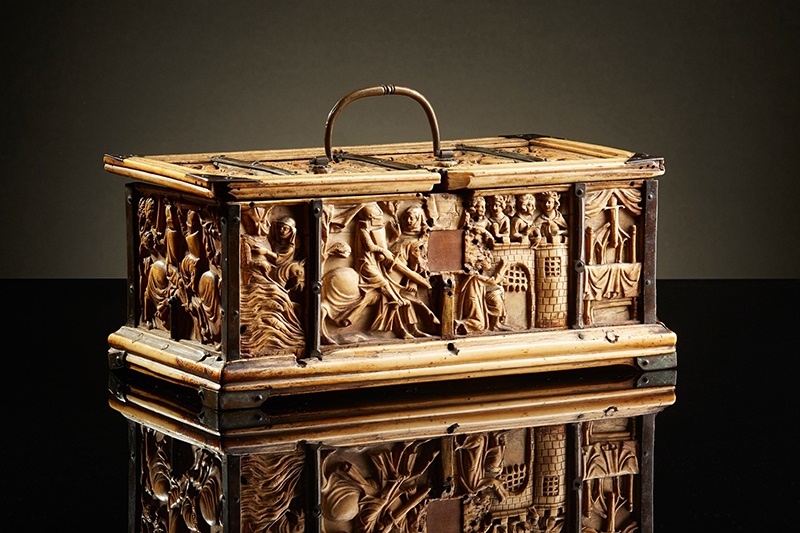 The casket was a true auction highlight. However, any overview of the recent Five Centuries sale must acknowledge the fact that we all remain in the grip of a global pandemic which has presented many challenges. Yet despite this, the current market climate for our Five Centuries Sales is incredibly buoyant and the selling rates and average lot values have been higher than pre-pandemic levels. The general perception in recent years that traditional antiques and ‘brown furniture’ are off the boil no longer holds true. For example, two pieces of elegant but traditional furniture, which were consigned for the sale via the valuations department, a George II mahogany tea table, estimated at £300-500 and a George III satinwood and marquetry demi-lune hall table, estimated at £1,000-£1,500, both faced lively bidding competition from online bidders and went on to sell for £1,625* and £2,750* respectively. While a traditional bronze, also from the valuations department, in the classical style and modelled as a figure of Silenus cradling the infant Bacchus, went on to fetch a healthy £3,250* against a £1,000-£1,500 estimate. These strong results for traditional furniture and works of art lots are reflective of the current upwards trend in values.

The Five Centuries sales often feature some obscure or unusual items too, for which there is always interest and demand. An example from the May sale was a Victorian seashell display case from the West Indies. It was in good condition and was filled with an array of colourful, pretty shells along with various plant, insect and reptile specimens, all from Barbados. It was rare, unusual and eye catching and went on to fetch £5,250* against a £600-£800 estimate.

Featured within our May Five Centuries auction were four small single owner collections from private houses and collections, including Kilmany House, Fife; property from Archibald Stirling of Keir; Tornaveen House, Aberdeenshire; and the collection of Dr John A. Packer, from Edinburgh’s New Town. Presenting consignments such as these, as named single owner collections, and marketing them within the catalogue, using photos of the house or a written introduction, can often elevate the items being offered and in the cases of the collections above all sold well, and each reached a total above the high estimate. At Lyon & Turnbull we see the potential of presenting goods to the auction market in this way and are experienced in doing so.

It has also been the case, in the past 18 months in particular, that buyers have become increasingly confident to buy lots without viewing them first-hand. Buyers can use the eyes of the Lyon & Turnbull specialists to provide condition reports and additional images for items of interest, and to many clients now online buying is more preferable than travelling long distances to an auction or sitting in a saleroom for several hours.

The Five Centuries sale had 650 lots in total and the selling rate was a healthy 83%. We are seeking to consign further lots for the next sale on 1st September and it is often the case that items from recent valuations, such as furniture, paintings, clocks, porcelain and glass, are ideally placed in our Five Centuries auctions, be it one or two pieces or a small group of 30 or 40 lots, offered within the catalogue as a named collection.

Should your client require an inheritance tax or sales valuation, please do not hesitate to get in touch with our Valuations team. With traditional antiques seemingly back in fashion and the great advances in online bidding and buying I feel confident that the antiques and fine furniture auction market will continue on this crest of a wave for some time.

*All sold prices include buyer's premium

Katherine Wright is an accomplished auctioneer and specialist valuer with many years experience. Katherine joined the Lyon & Turnbull team after over 15 years with Bonhams auctioneers in both London and Edinburgh, where she progressed to become Head of Ceramics & Glass. With a main specialist focus on British, Scottish, Continental and Decorative Arts ceramics and glass Katherine also developed a breadth of experience working as cataloguer and valuer in the Furniture & Works of Art, Silver & Jewellery and Decorative Arts departments.