From the private Scottish collection of Henry Glenlyon Campbell Roger (1919-1999) of Edinburgh, Lot 22 in our 04 November sale embodies all the characteristics of an imperial textile created for the emperor’s throne cushion. We are delighted to present this Qing Dynasty 'Dragon' Throne Cushion Cover to auction in our Fine Asian & Islamic Art auction.

It was customary in China that the silk furnishing fabrics for the emperor’s palaces, staterooms and private apartments, should be of minghuang- ‘bright yellow’ silk and indeed the same colour was used for costumes worn by the emperor, the dowager empress, the empress and first rank imperial concubine on formal occasions. Not to mention the throne of the Emperor, one of the significant emblems of power, would be decorated in a similar manner.

This particular shade of yellow was created from the flowers of the Pagoda tree and since the colour was reserved for the Imperial family alone it has become associated in China with all things imperial for over 1,000 years. The colour was chosen because the emperor represented the daytime sun on earth and it was he who offered the main annual sacrifices to Heaven, Earth, the Moon and the Sun on behalf of the people. 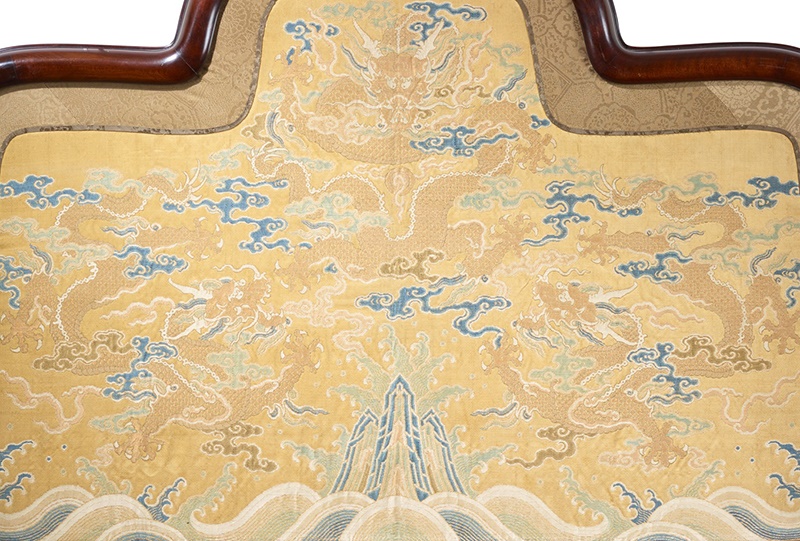 Three different techniques could be used to create the silk furnishings: embroidery, brocade or tapestry (kesi), of which embroidery and brocade were the ancient traditional Chinese techniques. There was no apparent rule for which should be used although brocade was more hard wearing. Yet in the extravagant living of the 18th century a worn textile would simply be replaced. Within sub-sections of brocade weaving the most highly complex is ‘lampas’ which allows the light to fall on silk threads which appear predominantly vertical in sections such as the background and horizontally on the design – creating an almost three-dimensional effect, while the threads are interwoven in a manner producing a strong material. It was used almost exclusively for Palace brocade weaving.

The panel presented here embodies all the requirements of an imperial textile, created especially for the emperor’s throne cushion. It depicts a front-facing five-clawed dragon flanked by a pair of dragons amidst auspicious clouds above turbulent rolling waves emitting foam and spray, crashing against three jagged rocks.

Imperial yellow embroidered satin throne-back cushion covers related to the current example can be seen still in situ on the thrones in the Hall of Supreme Principle, Taijidian, and the Palace of Eternal Spring, Changchundian in the Palace Museum, illustrated by Hu Chui in The Forbidden City, Beijing, 1998, p. 52, and 55. Several related embroidered silk yellow-ground throne back cushion covers of similar date (Qianlong and Jiaqing periods) have been sold. See Christie’s New York, 24 March 2004, lot 25; Christie’s New York, 29 March 2006, lot 278; Christie’s Hong Kong, 27 May 2009, lot 1851; and Christie’s London, 13 May 2011, lot 1196.

From the private Scottish collection of Henry Glenlyon Campbell Roger (1919-1999), of Duddingston Village, Edinburgh, Lot 22 in our 04 November sale was inherited from the estate of his father, Herbert Campbell Roger, OBE (1st Jan 1920), awarded the Chevalier de L’Ordre de la Couronne by King Albert of Belgium for his service during the Great War (4th Dec 1919) and as Secretary of the British Red Cross for some 20 years. Although anecdotal, the family used to discuss the adventures of William (James) Steel, father of Mrs Anne Lang Roger, a Master Baker of 498 St Vincent Street, Glasgow. He died, aged 47 on 28/5/1895 (BMD Barony) after a number of years as a contracted Master Baker to the colonial forces in the Indian Mutiny and the Opium wars. He was believed to have brought a considerable number of Far Eastern items back with him. William Steel was wealthy and variously described as Head of the house, house factor, Master Baker and a mill owner (1881 Census, Glasgow). These items would have fallen to Mrs Anne Lang Roger (nee Steel) his daughter by inheritance. This private family collection was considerable and was enhanced by further purchases made by Mrs Anne Lang Roger’s husband Herbert Campbell Roger in accordance with the fashion trends towards the end of the Victorian period. 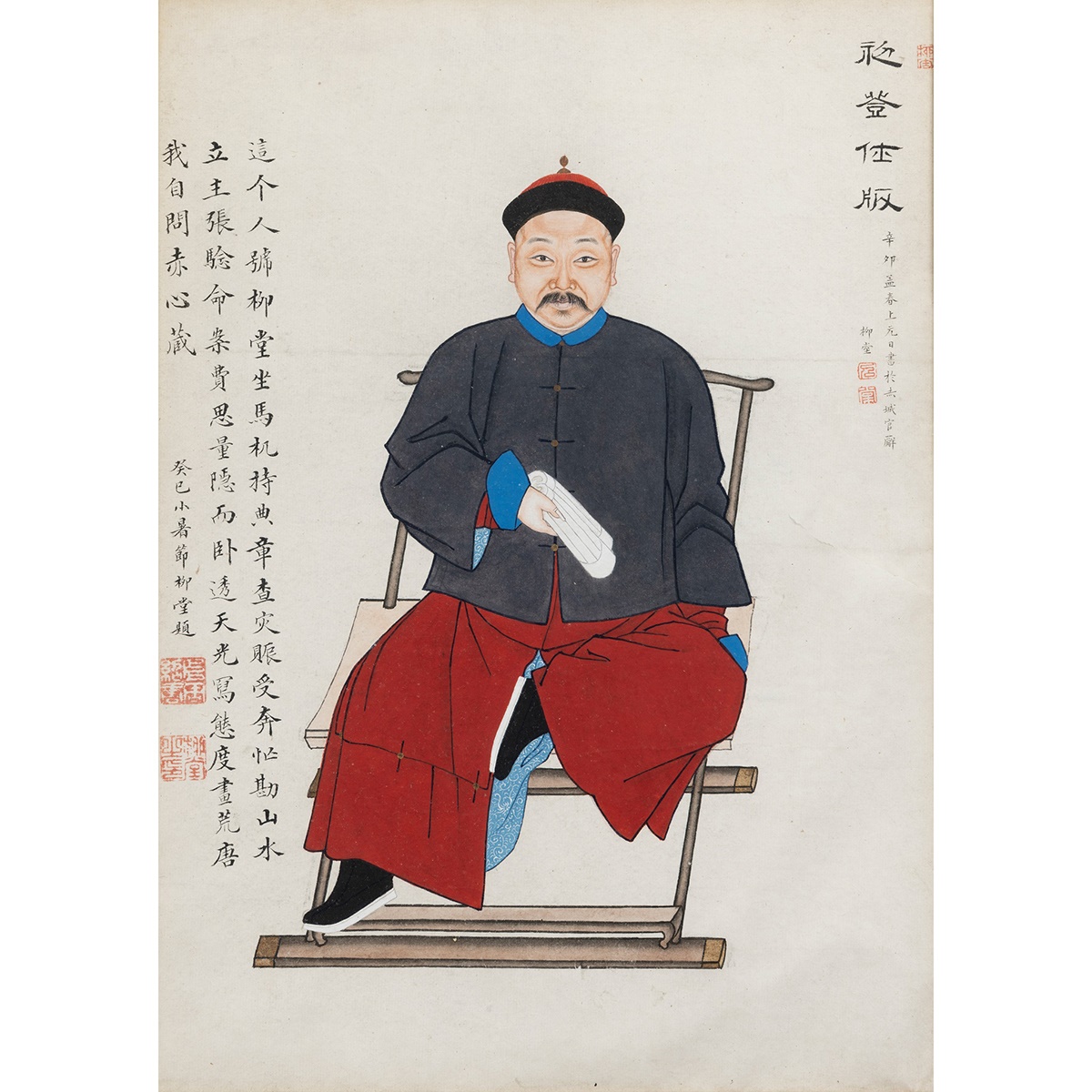 From the same collection is Lot 64, a rare group of ancestor portraits celebrating the significance of Scholar Zhou Zaotang's family, also featuring in our forthcoming live online auction. The centre of this group of portraits is Zhou Zaotang, who commissioned this rare group of his ancestor portraits to trace back, or celebrate the significance of his family in the political domain in the Qing Court. Spanning over three generations, Zhou's commission of his ancestor portraits are detailed with their respective names. However, in a patriarchal society, only the males have their full names and females their maiden names. The details also include their official ranks, political careers, dates and times of birth and death, and their burial sites.