A mystery panting of Glasgow’s Trongate has been discovered by our team of Paintings specialists. The view has been attributed to artist William Gawin Herdman and was sold in our 27 November British & European Paintings auction for £12,500 (inc premium). 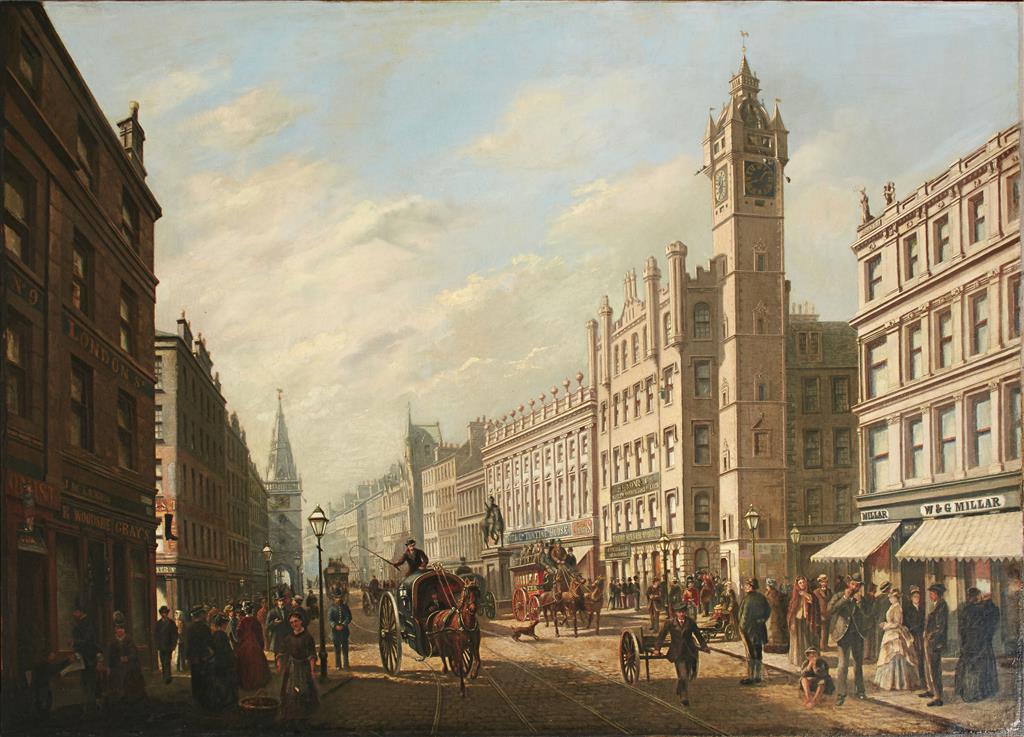 An atmospheric and evocative scene of Glasgow’s central hub, the Trongate, in the late 19th century, this panoramic view depicts the bustling street, looking west, towards the modern-day Buchanan Street. Two key Glasgow landmarks are prominent: the Tolbooth Steeple on the right hand side of the composition and the Tron Steeple further down the street. Close attention to the fashions worn by female figures and the named shop fronts, suggest that this scene can be dated to the 1870s.

When the painting arrived from one of our clients in the south it caused quite a stir as none of us had ever seen a Glasgow street scene of this nature and with such architectural detail before. We were able to accurately date it to 1872 from the shop signs and the ladies fashions. As far as we are aware, there isn’t another quite like it. It is a magnificent painting and you can still easily recognise the scene today 143 years later.” - Charlotte Riordan, Paintings Specialist.

The name ‘Trongate,’ in reference to this area of Glasgow, first appeared around 1560. The name developed in response to, and in recognition of, the ‘tron’ – the beam which officially weighed trade goods as they entered the city walls. ‘Gait’ or ‘gate’ is an old Scottish word meaning, ‘the way to,’ thus Trongate is literally the way to the ‘tron;’ the way to the financial and mercantile centre of Glasgow.

The name has stuck throughout the centuries, even as the city has changed and developed. In its time, the building which the eye-catching Tron Steeple has stood over has housed both Catholic and Protestant churches, a place of execution, a meeting hall, a police station and is now a theatre. Times, people and reputations change but this striking work demonstrates that city monuments are enduring keystones, creating a consistent backdrop against which the city hustle and bustle flourishes.