Our specialists selected a few of their favourite things to highlight some of the exceptional pieces in our Five Centuries: Furniture, Paintings & Works of Art from 1600 auction which took place in Edinburgh in February 2020.

Our February Five Centuries auction featured excellent examples of British and Continental furniture, paintings and works of art, including specialist collecting areas encompassing clocks, bronzes, ceramics & glass, rugs & carpets. Our specialists chose a few of their favourite things to share as highlights from the February auction...

the raised hinged top opening to a void compartment above a pair of moulded fielded panel doors centred by heart-shaped bosses, opening to an interior fitted with an arrangement of small drawers enclosing an architectural mirrored recess,

above a long drawer and slide; the corresponding separate base with a further long drawer; on an associated George III mahogany stand with blind fret carved square legs and pierced corner brackets

“There are lots of items that have captured my attention in this sale, but I’d if I have to pick one, it would be the Flemish tortoiseshell and ebony cabinet. It dates to the second half of the 17th century and is extremely evocative of the period, using exotic materials in a richly ornamented and flamboyant manner. This is a piece of status furniture that was made to dazzle and impress. The use of ebony, which has been ripple-cut to reflect light, is contrasted by the tortoiseshell panels which have been backed with red bole; a classic Baroque combination. White metal and gilt mounts add further drama, which continues inside where an architectural niche opens to reveal a mirrored interior with columns and a parquet floor that seems to reflect infinite depths.The cabinet would have had no practical use, but most likely would have held precious objects and collections of natural specimens. It now sits on a very nice Georgian mahogany stand, but would originally have a matching ebonised stand, or because of it’s small size, may have sat on a table. If you have an eye for opulent interiors it would make a fabulous centrepiece!”

I just love the intricate details of these carvings, so fine you can clearly distinguish between the different facial expressions in the very dramatic scenes of Hercules’ adventures. The longer you look at them, the more you discover: the carver even added tiny little figures in the background.

Hardstone carvings like these were first done by Hellenistic Greeks, rooted in the carved stone seals in sunken relief in ancient Mesopotamia. The Greek cameos often depicted deities or other motifs with talismanic connotations. Often used to complement jewellery, cameos were worn since the classical antiquity to advertise the wearer’s taste, wealth and to profess their devotion to certain gods or even political forces.

These sailor’s woolwork pictures, often known as ‘woolies’ are a great example of their kind. The colours are bright and vibrant and its unusual to find a true pair. Woolworks of this type are thought to have originated in Great Britain around 1840, and were at the height of their popularity between 1860 and 1880. Whilst they may be referred to as ‘sailor’s’ it seems likely that such woolworks were made on land, where portraits of ships provided a thriving business for ports along the coastline. I’m particularly drawn to the depiction of the sea in lot 211, which cleverly deceives the eye into seeing rolling waves.

the saddle covered in yellow silk velvet with a white metal horn embossed with a cartouche and military trophy; the trapezoidal saddle-cloth of red silk velvet with applied gilt metal stars and silvered stud decoration, the central reserve with cut-outs for the the saddle back and horn; with a partial leather and white metal bridle and breastplate

The Ottoman empire spanned over 600 years and had a large, diverse population, which led to an everchanging and rich cultural and artistic history. Tetiles were of particular importance, spreading from the Nomadic tribes through to settled Anatolia, sharing different craft methods and decorative symbolism as they went. Lot 15, a wonderful Ottoman saddle with a velvet and metallic foliate embroidered saddle cloth is a fine example of practical items made at the time showing the wealth and beauty of the period. 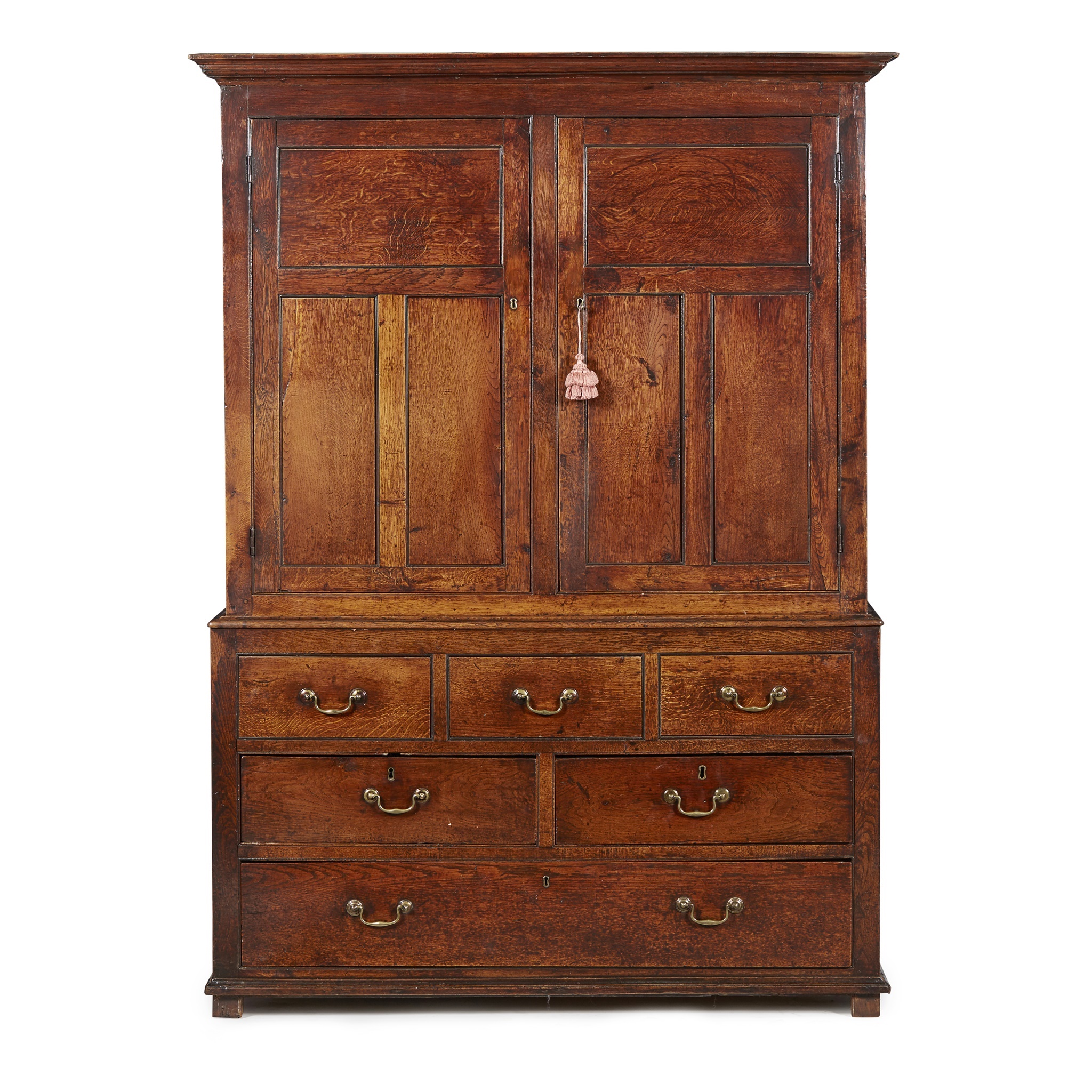 the moulded cornice above a pair of triple panel doors, the lower part with three short dummy drawers over two further short drawers and a long drawer, raised on stile feet

My favourite thing is lot 49, an 18th century oak livery cupboard. It’s simple and timeless construction together with the rich patina of the oak means that it will bring warmth into any style of house. It is also extremely functional with plenty of room for storage.