Ahead of our two-day Five Centuries: Furniture, Paintings & Works of Art auction in November 2021, our Five Centuries team selected a few of their favourite things to highlight some of the intriguing pieces that featured in the sale.

Ahead of the sale our team chose a few of their favourite things to share as highlights that featured in our November 2021 auction... 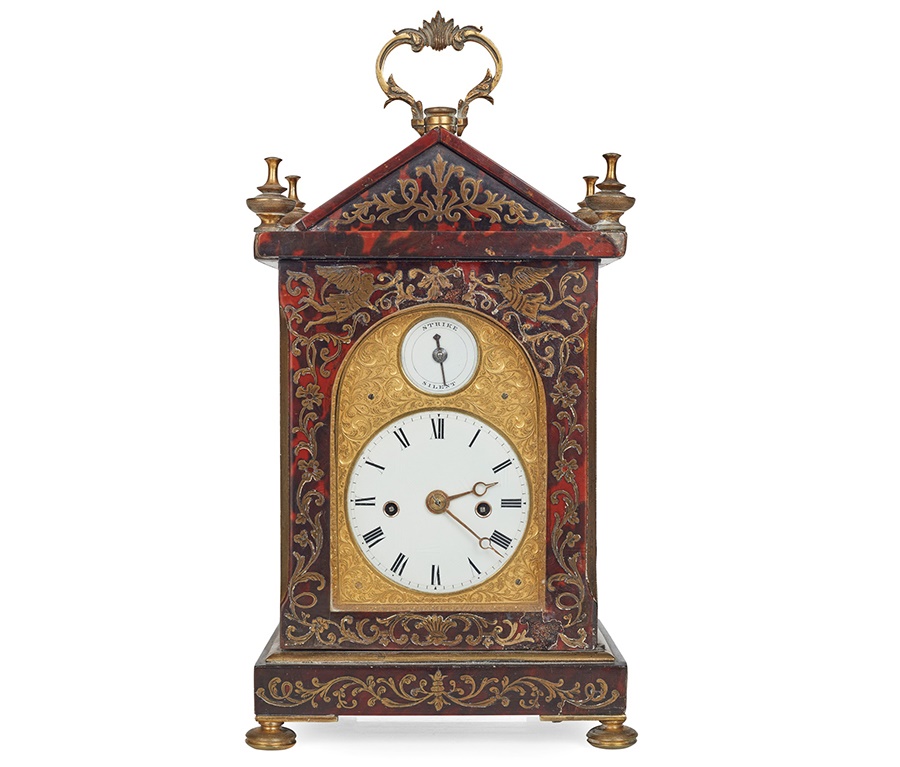 In this outing of ‘Five Centuries’ the piece that has caught my eye, and ear, is lot 305, the small bracket clock in the Boulle marquetry architectural case. It’s a little gem of a clock, in its beautifully executed tortoiseshell case done in premiere and contre-partie marquetry. I’m always amazed at the level of workmanship and precision that went into making these intricate timepieces, and I’ve happily been listening to it tick away and strike the hours on my desk over the past few days. The dial is held in an intricate foliate engraved gilt mask that is as bright today as the day it was made. And finally, the movement, which has a more unusual Swiss lever escapement, strikes on a bell in the most pleasing way. No clunky clang here, but a gentle and almost ethereal ‘ping’ to look forward to every hour. The clock, along with 40 other lots, comes from Laraich, a traditional Scottish former hunting lodge until recently owned by the Joynson family. Once belonging to their ancestor, the British diplomat Sir Maurice William Ernest de Bunsen [1852-1932], the clock has an estimate of £400-600 but I suspect others will like it as much as I do, so we will see what happens on sale day. 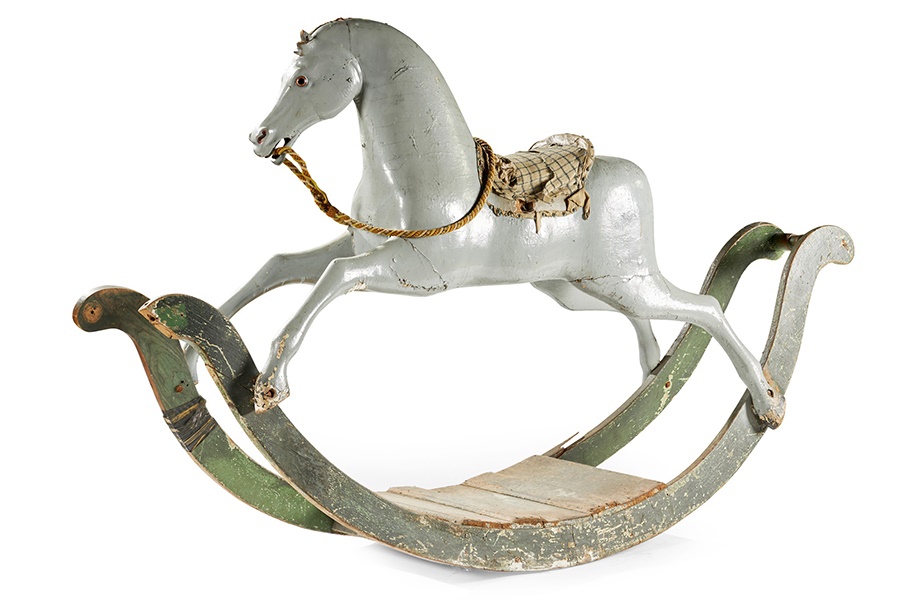 My favourite lot is 323 the Victorian painted rocking horse. Who could fail to be enchanted by this! As soon as I saw it in the house, I was drawn to it, conjuring up all sorts of thoughts of who might have played on it over the years. This example has a particular charm for its worn and used condition and is impressive for its large proportions. The perfect Christmas present! 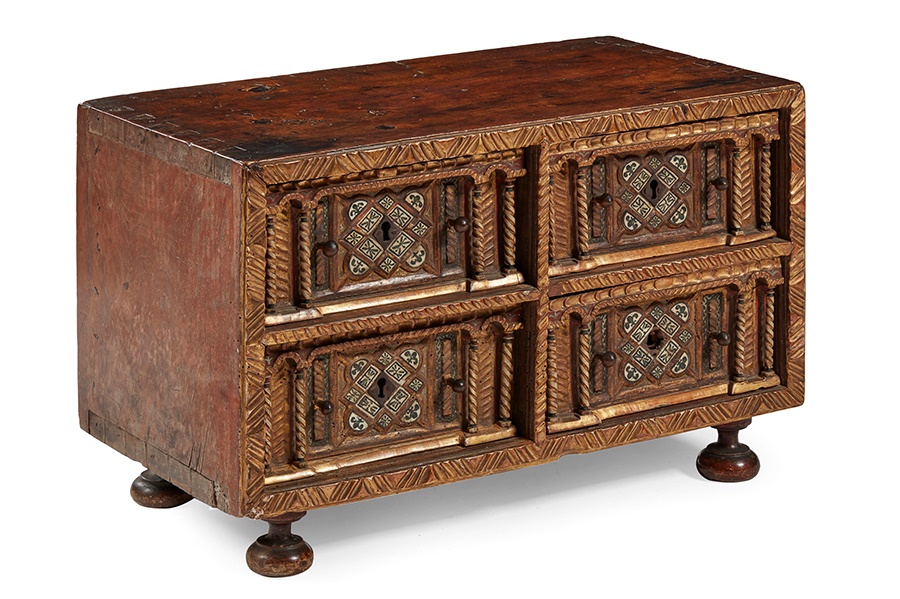 These little cabinets are known as vargueños or bargueños, meaning from Bargas, which is a very distinct type of Spanish furniture that first appeared in the 15th century and was common until the 18th century. They were made to carry valuables such as jewellery and documents, so they are sturdy and transportable while still being highly decorative.

The intricate geometric pattern on this box shows the fondness for Islamic design in Spain that survived long after the Reconquista. I think all the little details, especially the almost architectural features like the spiral columns are exquisite and show a high level of craftmanship. 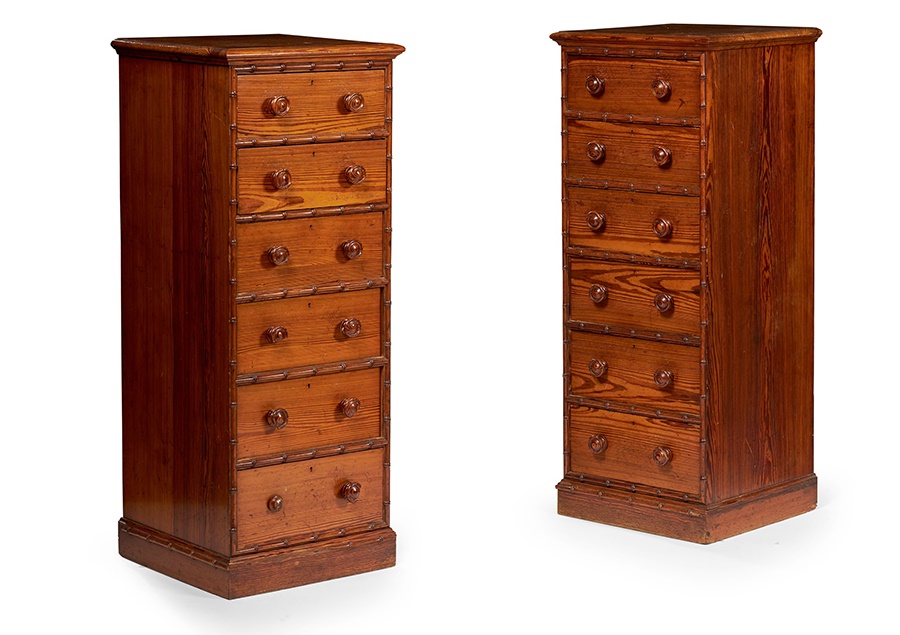 It’s always hard to choose a favourite lot from each sale and on this occasion I have cheated and chosen a small group of furniture, but all by one maker, Howard & Sons of London. I was instantly drawn to lot 272 and lot 273, a pair of pedestal chests and a low press cupboard made from Oregon pine. I was attracted by the wonderful patterns of the grain in the pine, the rich colour and the simulated bamboo mouldings around the edges of the drawers and doors. These are practical and robust pieces of furniture that could be in regular use in the home. Being made by Howard & Sons the construction and quality will be first class. The use of the bamboo simulated mouldings is a simple feature but it elevates the design and gives the overall appearance a distinctive look and style. The bamboo motif nods to the late 19th century Aestheic movement and the fashion for using Japanese and Chinese design features in many elements of British and European design. Howard & Sons are probably better known for their upholstered country house sofas and chairs, which have been fashionable and desirable since they came into production in the 1840s. We have two super examples of Howard & Sons upholstered furniture in this sale, both of which I would also love to own. Lot 274 is a sofa, the ‘Chaplin’ model, with a matching footstool, lot 275. These are in true country house condition and retain the original Howard & Sons monogramed fabric. They have been in the same family for many generations and were originally from a now demolished castle in Aberdeenshire. They are now ready to be re-upholstered to 21st century tastes and will go on to be enjoyed by future generations.