Our specialists have selected a few of their favourite things to highlight some the exceptional pieces featuring in our Five Centuries: Furniture, Paintings & Works of Art auction taking place live online this November.

Our November 2020 Five Centuries auction features excellent examples of British and Continental furniture, paintings and works of art, including specialist collecting areas encompassing clocks, bronzes, ceramics & glass, rugs & carpets. Our specialists have chosen a few of their favourite things to share as highlights from our 18th & 19th November auction...

For this sale I’ve selected two lots that I would be quite happy to own, although narrowing my list down to just the two has been quite difficult - there are so many lovely pieces to choose from. The first is the longcase clock by James McCabe, lot 190, dating to the first decade of the 19th century. I’ve always been partial to round dial longcases, and there’s something about the neat proportions of this one that I find particularly appealing. The case is rather spare by design, but not too much, with moulded details to the trunk and plinth, and stop-fluted angles that repeat on the hood. It possesses a refined elegance without ostentation. McCabe was originally from Ireland and came to London at the end of the 18th century, establishing himself as a maker of quality clocks and timepieces.

Burne-Jones's Drawing of Hands show detail studies for the three-light St. Matthew Window in the east wall of the south transept of Jesus College Chapel, Cambridge made c1872. It contains figures of (from left to right) Sibylla Persica, St. Matthew and Sibylla Cumana. The two studies to the left of the page are for Sibylla Persica and the two on the right are for Sibylla Cumana.

At this date the artist was preparing paintings from cartoons. It was his practice to make detailed studies of all the elements in a painting. These four were most likely made after the cartoons had been prepared and were to be passed to an assistant for laying in the design onto canvas. However, as was characteristic of the artist who prepared more works than could possibly be achieved, neither of the two side figures became paintings unlike the central figure of St. Matthew.

My other favourite item is taken from the wonderful group of paintings and drawings included in the sale. Lot 520, the pencil study of hands by the Pre-Raphaelite artist Sir Edward Coley Burne-Jones, would truly be a guilty pleasure to own. There’s something I find irresistible about seeing how an artist works out a design or practices their technique. It’s a bit like having a look behind the curtain, a view that is usually hidden from us. They were made as Burne-Jones was refining the composition for the St. Matthew Window in the east wall of the south transept of Jesus College Chapel, Cambridge in 1872. I’ve always been a fan of Burne-Jones’ work, and he was one of the first artist’s I took an interest in as a child, so to own something created by him, especially something so ephemeral as a working sketch, would be a real highlight.

Wright is one of the most successful artists of the Age of Enlightenment, known primarily for his atmospheric paintings using chiaroscuro in order to emphasise the contrast of light and dark. He made a name for himself through his exceptional skill at painting dramatic light, often linked to his connections to Enlightenment figures such as Josiah Wedgwood and Erasmus Darwin.

Read more about this piece ⇒

As a collector of portraits and a huge fan of the works of Wright of Derby, this has to be my favourite painting in our November Five Centuries sale. Wright really captures his sitters personalities and here, the twice Mayor of Derby Henry Flint sits proudly, perhaps with a slight smile on his face. The sale includes many wonderful portraits and landscapes so there is something for everyone

This beautiful jewellery box is an example of fine craftsmanship and distinctive design that transcends the passage of time. With its use of exotic and prized timbers, combined with the repeating geometric pattern, it must have been an extremely eye catching piece to the 19th century eye. Yet despite its age this box would sit comfortably in the most stylish 21st century interior. The box is veneered with lozenge shaped panels of richly figured and burred amboyna wood, within a trellis framework of dark grained rosewood. Each intersection of the framework has been inlaid with a small diamond shaped piece of iridescent mother-of-pearl, which catches the light and provides contrast with the wood. The simplicity of the design allows the characteristics of the materials used to be appreciated and shown to full effect. The interior of the box is pristine and has been refitted with plush velvet linings and compartments. This box would be the perfect place to keep some treasured jewels. 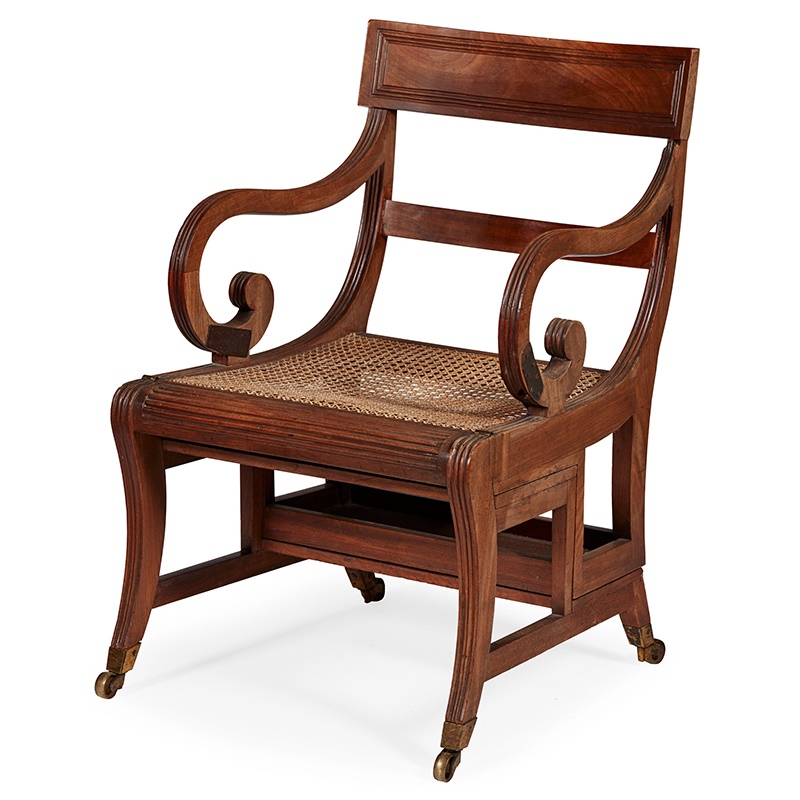 The Regency period of the early 19th century ushered in a style of furniture design which moved away from the rich carving and bulk of previous years toward a preference for more elegant lines, right angles, a reduction in scale and the use of ornamentation to highlight pieces. This period also brought an attraction to 'metamorphic' furniture, that is to say furniture that appears to have one function but through clever mechanisms and design can be altered to another.

Taking their cue from the 'campaign style' furniture used by the Army and Navy in the late 18th century, furniture makers refined the travel ready chests, beds and washstands to create more sophisticated and fashionable items for the grand houses and estates of Britain, of which this Metamorphic armchair is an excellent example.

My favourite lot is 62; this chicken coop is a well designed piece of country furniture made by a craftsman with good turning skills and a wonderful slab top. It is likely to have been a one off commission for a wealthy household. It really is a 5 star chicken house!

The central figure of Neptune holding an opening shell and riding a dolphin, was an immensely popular late Renaissance subject. Multiple examples exist in private and public collections including the Thyssen-Bornemisza collection, Madrid, and the Kunsthistorisches Museum in Vienna. Anthony Radcliffe has proposed an attribution of the model to Francesco Fanelli, but this has recently been questioned in favour of an unknown master active in the late 16th or early 17th century. The rocaille base on the present lot clearly provides a terminus post quem to the 18th or possibly 19th century.

This salt cellar really evokes images of the lavish dinner parties that would have been thrown by the owners of it. Large, ornate salt cellars like this one go back to the middle ages and were used all the way through to the beginning of the Industrial Revolution. They were a sign of status and prosperity, and the sea was an often used motif, so Neptune would appear quite regularly in this context, watching sternly over the diners.

Viewing by appointment from 14th to 17th November in Edinburgh.