From Old Masters to contemporary makers, and from up-and-coming names to stars of Scottish and international art, our 05 October Paintings & Works on Paper auction offers the opportunity to begin - or develop - your collecting journey.

In anticipation of the 05 October Paintings & Works on Paper auction, members of the Lyon & Turnbull team have selected a few of their favourite pictures to share from the sale. Read on to learn more about the pieces they would love to hang on their walls...

I love the determination in the eyes of the young Peter Howson in this self-portrait – it’s as if he’s looking beyond the mirror, to his future as an artist. The eyes burn whilst his lips fall relaxed with self-confidence, self-possession. The title of the work somewhat gives the game away – the conscious reference to Joyce’s seminal study of the artist’s journey – yet even without it, in the confident pencil lines and the shadowing around the eyes (which makes the eyes bright, Lucian Freud clear) speak of Howson’s complete commitment to the dream of being an artist and particularly a painter – someone who conjures presence and narrative out of line and shade, colour and form. To have this on my wall would remind me every day to look at the world around me with an artist’s eye. 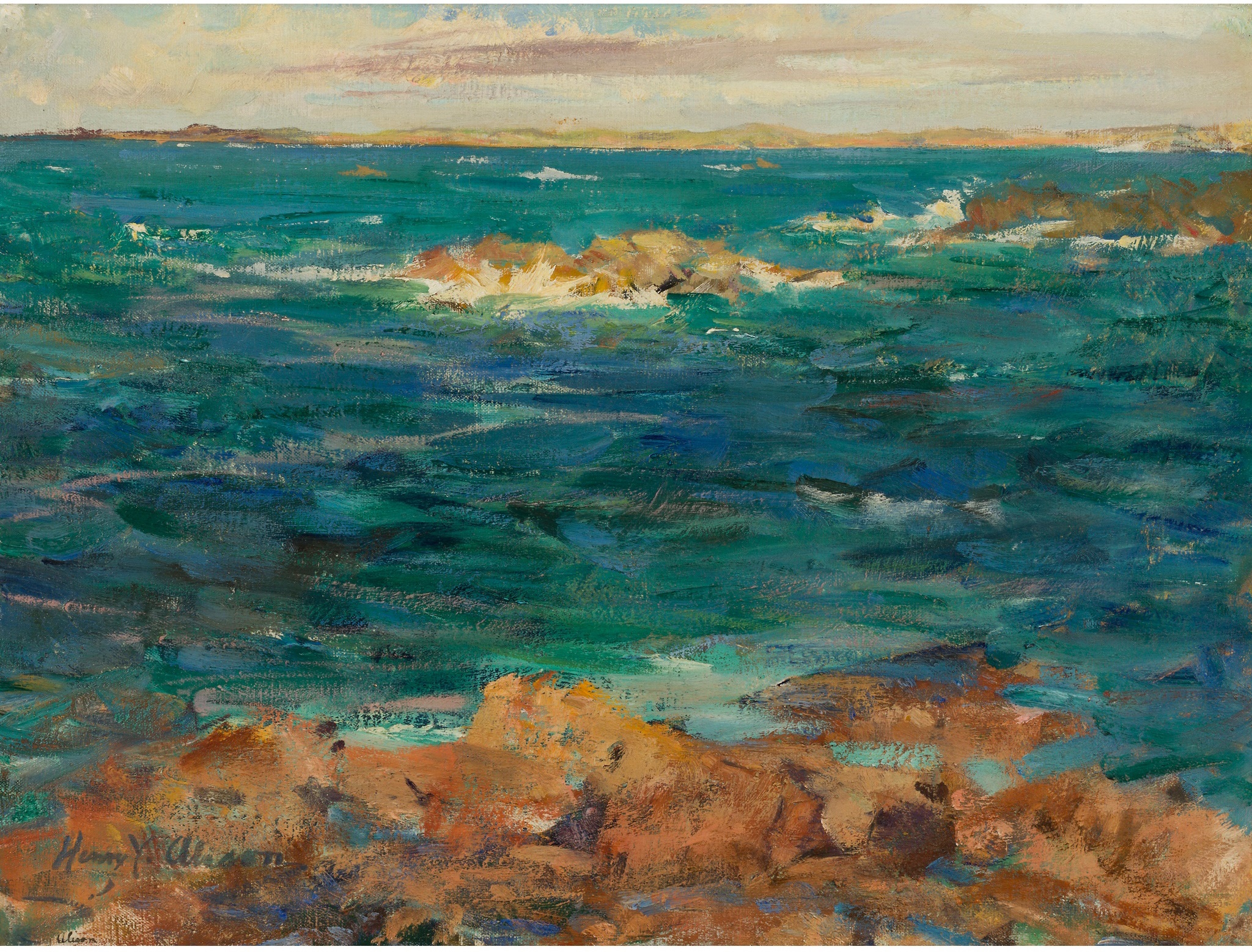 It is a difficult choice to make among so many works and artists that I like in this collection – from the magic and dreamy world of Alan Davie, to brilliant modernist colours of Caroline McNairn, or William Hunter Littlejohn’s slightly surreal and intriguing collages of shapes and figures.

I decided to go for the Seascape by Henry Young Alison (Scottish 1889-1972) created during the 1950’s. It may seem a traditional choice, but what I do like about it is the energy and force in the waves and sea, the rough strokes of paint with no intention of appearing smooth or appealing – is what makes it a bit modern and contemporary and verging on abstraction. Most of all though I like it because of its real and beautiful depiction of the sea, the light which seems to be late summer and the coastline in the distance. It’s almost as if I’m standing there and taking in the sound of waves, and deep blue and turquoise sea.

The artist Henry Young Alison also has an interesting life story and left a mark in the development of the Glasgow School of Art between 1927-1945 in various roles, where he also trained as a young student before joining WWI. He served in France and was captured a Prisoner of War, where he was injured and lost sight of one eye. Nonetheless, he returned to Scotland and continued painting and supporting new generations of artists for decades to come.

My favourite picture in the forthcoming Paintings & Works on Paper sale is Lot 109, the oil on canvas of St. Cyrus by the Scottish artist James Morrison. I have long been a follower of the artist’s work and this painting represents what I consider to be the most exciting period of Morrison’s career.

In a brief period from around 1965 – 1970 Morrison explored a much more abstract style, playing with bold colour and speed to produce canvases that give a haunting depth when the brush strokes are read. Saint Cyrus, the coastal village in Southern Aberdeenshire, is a title that appears often from 1967 to 1969 and was a place that Morrison returned to many times. Although a place of idyllic beauty on a summer’s day it can be a wild and windswept landscape in winter, which seems to have been what kept drawing him back. In his canvases of the period the use of tonal layers of washes and the use of the ground layer as a fundament element of the composition is reminiscent of the concept of ‘Ma’, or negative space, in Japanese ink painting of the Edo period. The towering masterpiece of this would be the 18th century two-fold screen titled ‘Cracked Ice’ by Maruyama Ōkyo (1733–1795) which is housed in the British Museum.

This abstract period of his painting culminated in a series of large ghostly hill landscapes in a very deep palette of colours and splashes of gold, including the works ‘Trantor’ and ‘Terminator’, that pull the viewer into a dark horizonless world. When you view Morrison’s work of this period your eye travels through the brushstrokes to the feel the speed and emotion that is left behind. This fleeting sketch like nature of these works is what always inspires me and gives me great envy as a painter myself, to produce that power to the viewer with so little.

In his later career he mainly represented the wide-open expanses of the Aberdeen and North East Scottish coast, which were a constant inspiration to him and for which he is justly famed. In these paintings however one can still see that earlier style, embodying his fascination with the elements, as the clouds sweep across the canvas. 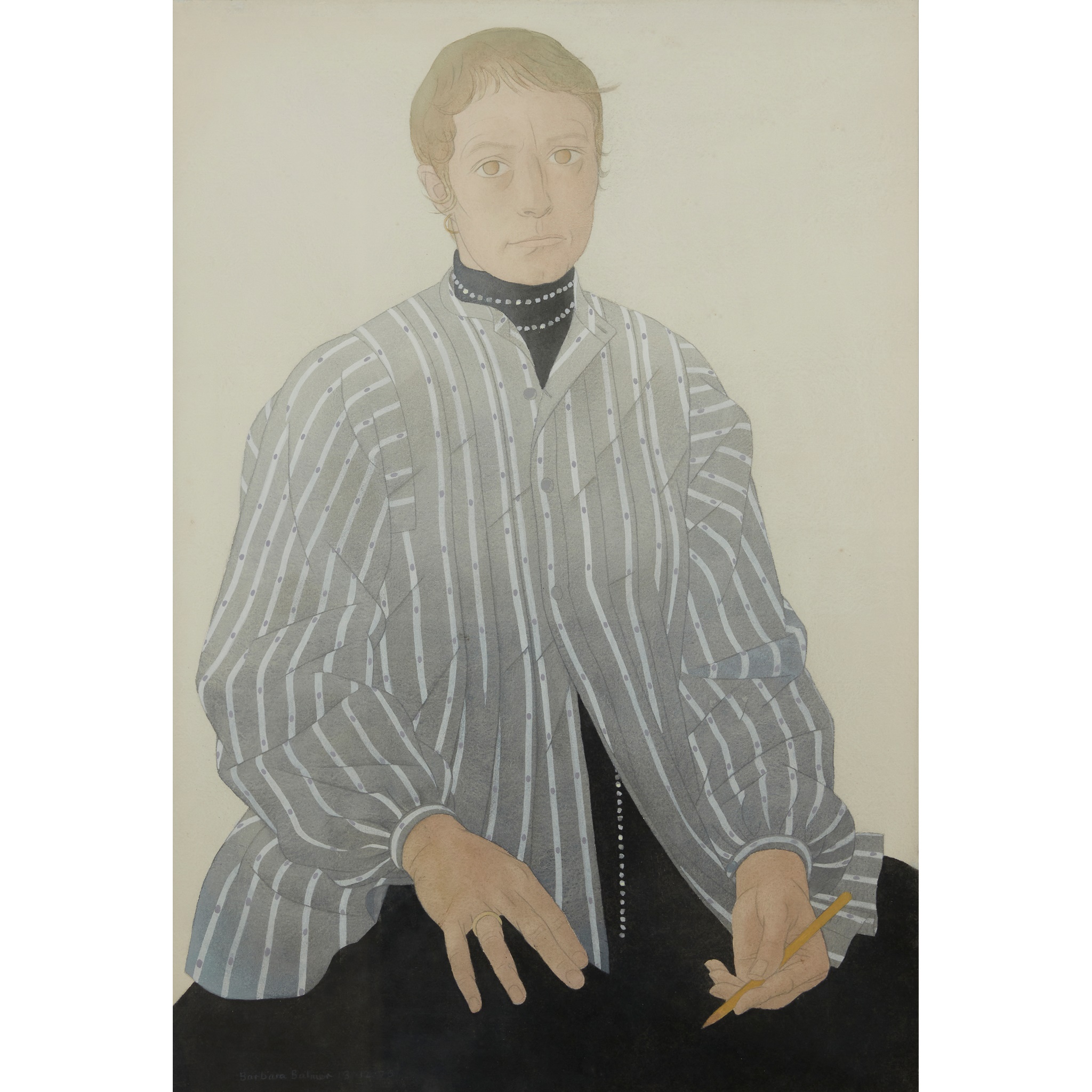 Studying in Coventry College of Art before enrolling in The Edinburgh College of Art for four years in 1949, Barbara Balmer was the subject of over 20 solo exhibitions throughout her distinguished painting career. This particular work I have chosen hails from the middle of her life, and although a self-portrait, this piece exhibits the soft colours and strong lines which became a characteristic across her extensive portfolio of still lives, interior views and landscapes. For me, this painting effectively evokes Balmer’s calm and gentle manner and I would gladly welcome her tranquil presence into any room of my flat! 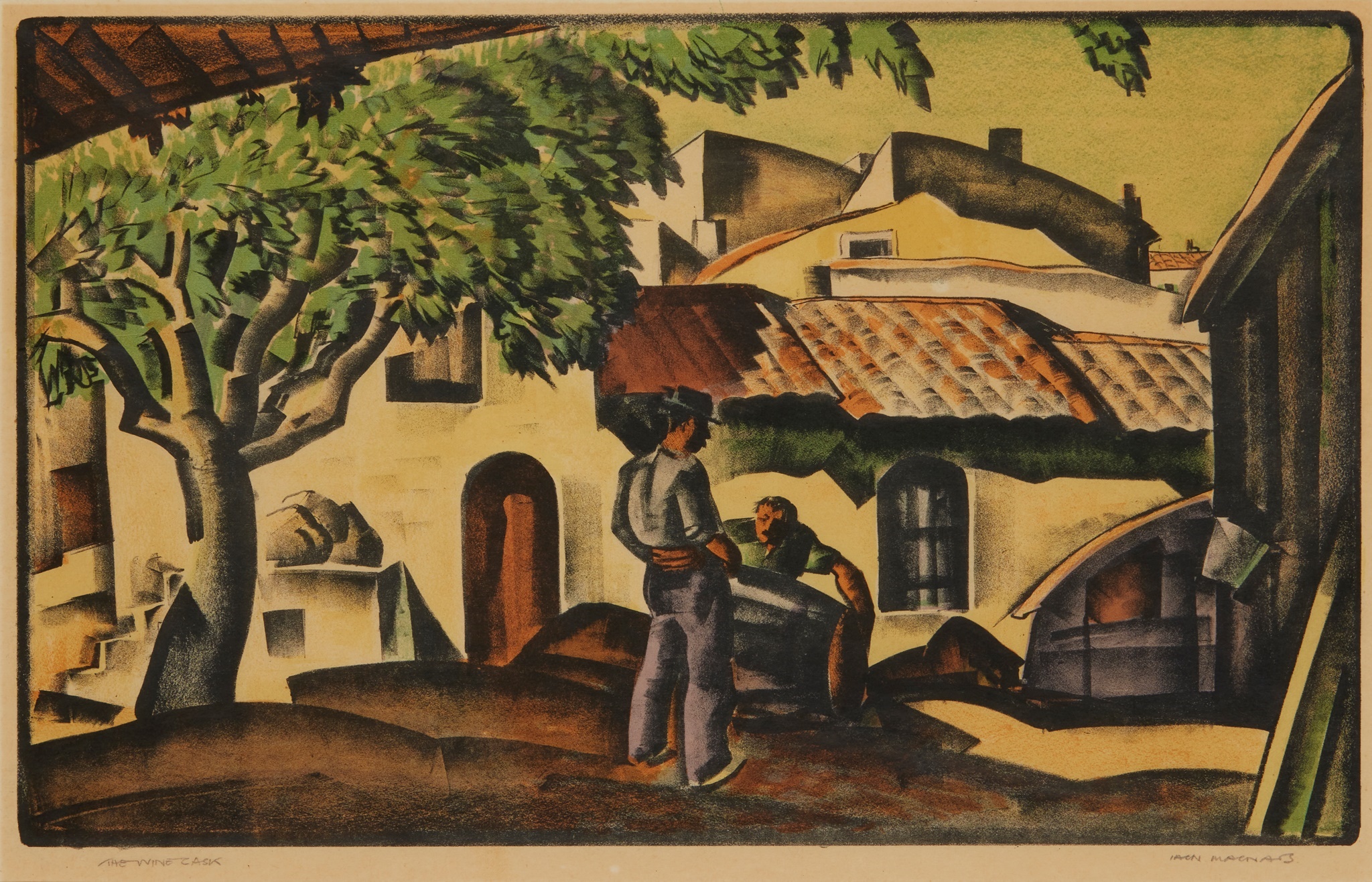 My pick from this sale is, of course, a lovely print! Iain MacNab was an important Scottish printmaker. Trained at the Glasgow School of Art and Heatherley’s School of Art, he was particularly known for his woodcuts but was a highly skilled draughtsman who could translate his talent into all printing methods. As the founding principal of the Grosvenor School, he had a far-ranging impact. At the school, he drew in artist-teachers such as Claude Flight, Sybil Andrews, Cyril Power and Lill Tschudi and promoted his idea of ‘rhythm’ in composition. The school did much to promote print-

making, especially lino-cutting, between the wars, and the resultant artworks are now considered part of a recognised ‘school’ and command high prices at auction. ‘The Wine Cask’ is a rare example of MacNab’s work, dating from around 1940. It shows his technical gift, a strongly structured composition delicately executed onto tissue-thin paper, and indicates the early evolution of the style of printmaking that would develop out of the Grosvenor School and MacNab’s vision. 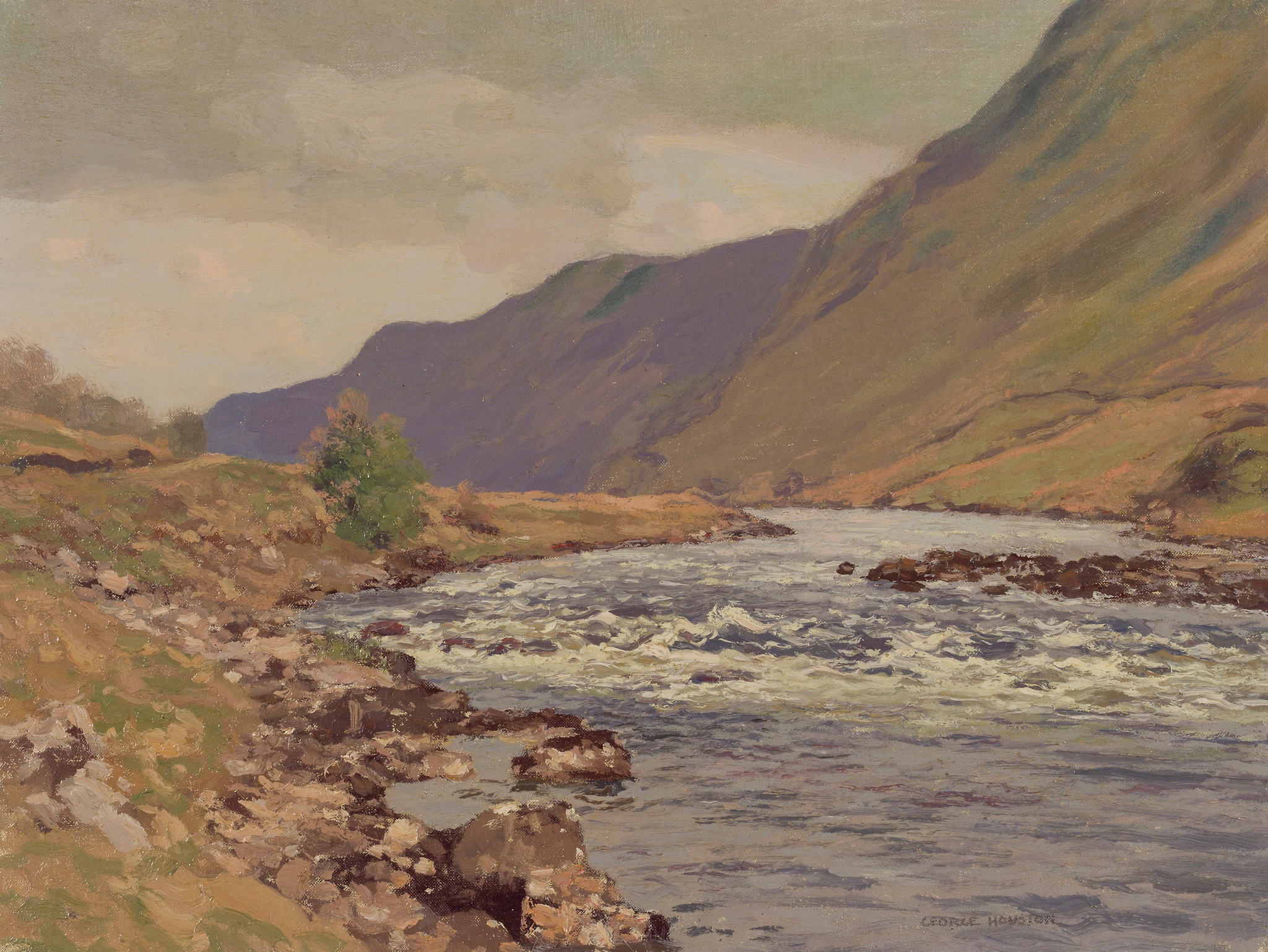 George Houston’s passion for fishing informed where he chose to paint. His preferred areas were around Loch Awe, Loch Fyne and Argyll, where he worked en plein air, returning to his Glasgow studio only to make finishing touches. Houston’s application of colour is reliably interesting in this river scene; I particularly enjoy the use of lavender pigment to suggest shadow in the distant hills, reflected in touches over the surface of the river. 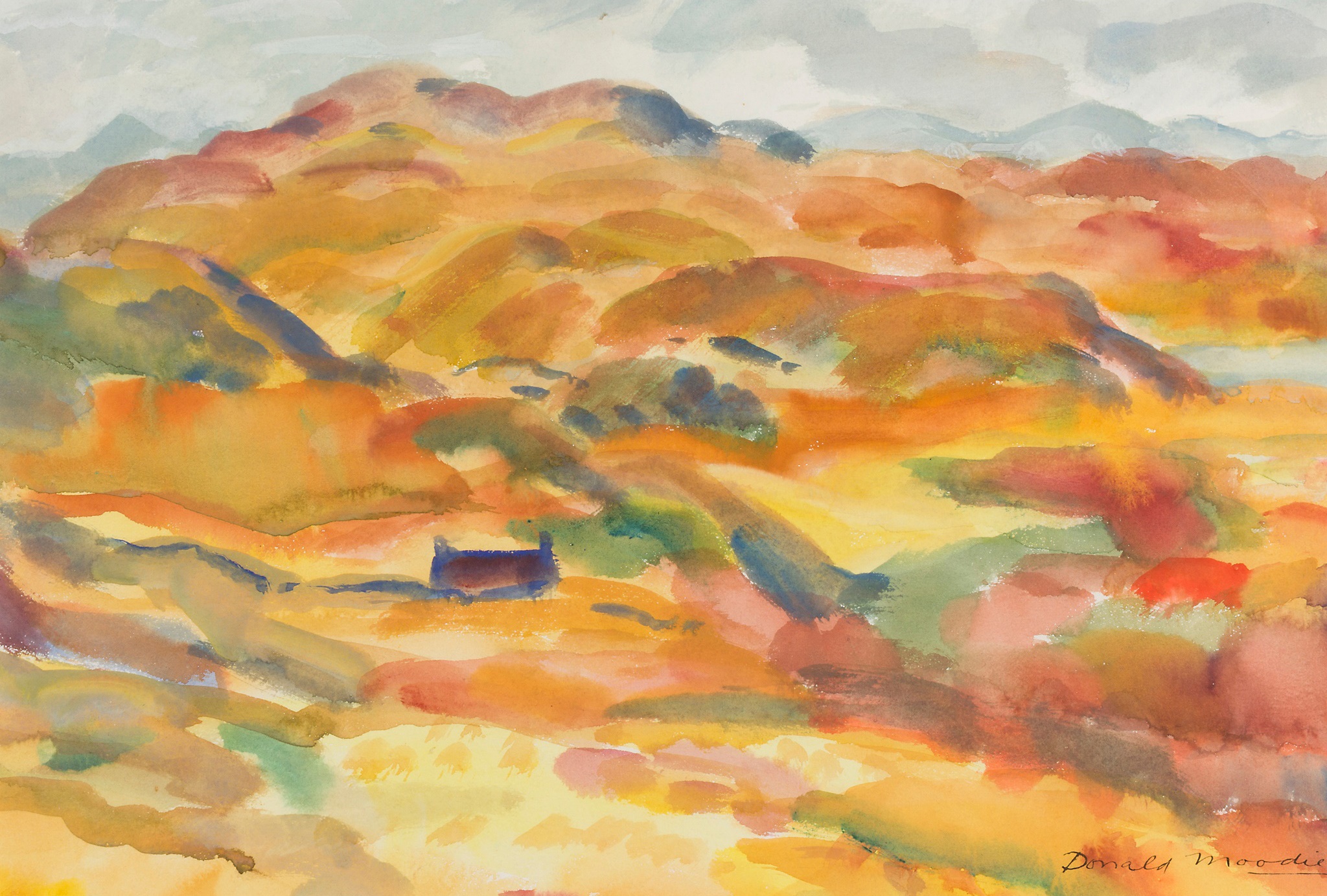 As a once keen, but now slightly rusty hill walker, I was very taken with this little picture. As soon as I saw it I had a longing to head to the Highlands, with the warm ochre and russet palette evoking the colours of a September day, before the winter sets in. The hills go on and on with not a road in sight. I’d have this on my wall in a heartbeat! 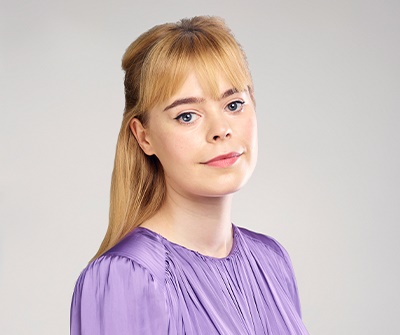