A dynamic movement at the end of the nineteenth century, New English Sculpture, injected energy and naturalism into English sculpture.

New English Sculpture was a dynamic movement at the end of the nineteenth century which injected energy and naturalism into English sculpture. The medium had been dominated by a neo-classical style seen as rigid and irrelevant to human experience, so much so that Baudelaire even wrote a critique of the Paris Salon in 1846 titled ‘Why Sculpture is Boring’.

The term ‘New English Sculpture’ was coined in Edmund Gosse’s article ‘The New Sculpture’ which was published by Art Journal in 1894, where he defined the movement as ‘a close and reverent observation of nature’. Leading sculptors such as Lord Leighton (lot 471), Alfred Gilbert (lots 121 & 122) and Hamo Thornycroft (lot 131) revived the Italian Renaissance art of ‘lost wax’ bronze casting in order to finely render surface details like musculature and facial expressions in a more naturalistic manner.

This approach was introduced by Aimé-Jules Dalou (lot 130) who disseminated the French method of direct modelling during the period he spent teaching at South Kensington School from 1877 to 1880. This combination of traditional and modern continental influences prompted these artists to recast well-worn classical myths in a distinctly original and relatable style. The movement re-established the relevance of sculpture within society by embracing the statuette, which bridged the divide between high art and decorative art without compromising on the standard of craftsmanship. Until the 1860s sculpture was primarily limited to the marble portrait bust or large classical figure but these smaller bronze casts created a new sculptural category which suited the scale and price desired by homeowners. The cult of the statuette was a popular feature in Late Victorian and Edwardian architectural design and enabled the classical heroic figure to fulfil a new decorative role within a domestic setting. 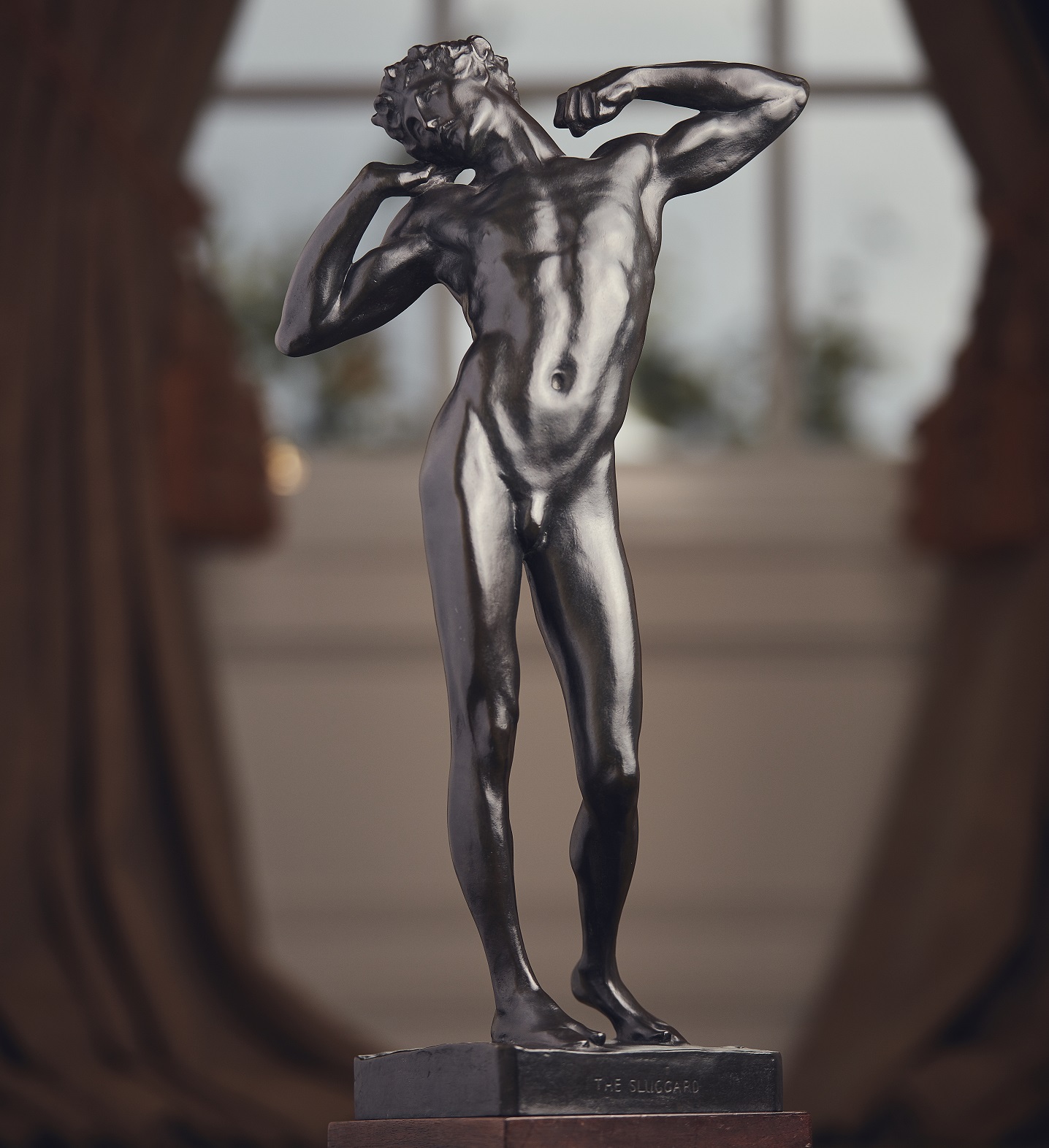 Sir Frederic Leighton was one of the pioneering figures in New English Sculpture, who during his eighteen year period as President of the Royal Academy, succeeded in elevating the status of British sculpture through teaching and exhibitions. Leighton became known as the father of New English Sculpture as a result of his guiding influence over the new generation of sculptors like Alfred Gilbert who recalled that the students at the Academy ‘’all had an ideal to emulate Leighton in his aims in Art’’.

The original figure of The Sluggard is a life-size bronze sculpture and one of Leighton’s seminal artworks. The clay sketch was exhibited at the Royal Academy’s Exhibition in 1896 with a fig leaf over his genitalia in order to avoid sexualising the sculpture when on display to the Victorian public. The Sluggard has been interpreted by Benedict Read as Leighton freeing himself from the shackles of sculptural convention as his work abandons frozen classical prototypes for a distinctly modern pose.

Alfred Gilbert was born in London and joined the Royal Academy in 1873 before going on to study at the École des Beaux-Arts and becoming one of the most influential sculptors of his generation and the New English Sculpture movement. Gilbert’s international career took him to Rome from 1878 until 1884 where he learnt the ‘cire perdu’ or ‘lost wax’ technique of bronze casting and was one of the first artists to reintroduce it in England. Gilbert sought to reinvigorate classical myths in order to make them more relatable to a modern audience, stating to Joseph Hatton about Benvenuto’s Cellini’s bronze Perseus and Medusa that ‘’amazed as I was by that great work it still left me somewhat cold, insomuch that it failed to touch my human sympathies’’.

Gilbert’s Perseus Arming was commissioned by Sir Henry Doulton and won an honourable mention at the Paris Salon in 1883. Rather than depicting Perseus in the dramatic aftermath of slaying the Gorgon Medusa, Gilbert’s Perseus Arming is instead a sensitive portrayal of the young hero anxiously checking his winged sandals. Gilbert stated ‘’I conceived the idea that Perseus, before becoming a hero was a mere mortal and that he had to look to his equipment’’ which was a radical departure from the traditional iconography associated with the heroic masculine figure. Gilbert adopts the classical figura serpentinata and free-standing bronze statuette, which were both celebrated features of Italian Renaissance sculpture, but modernise the subject matter by humanising Perseus as an endearing and vulnerable adolescent.

This psychological dimension was a key aspect of the New Sculpture movement and can also be seen in Gilbert’s Comedy and Tragedy which is often exhibited alongside Perseus Arming. Comedy and Tragedy captures the exact moment a theatre prop boy is stung by a bee as he rushes to the stage with a comedy mask. This dynamic pose reflects the New Sculpture’s emphasis on dynamic compositions as the narrative is most effectively appreciated in the round. 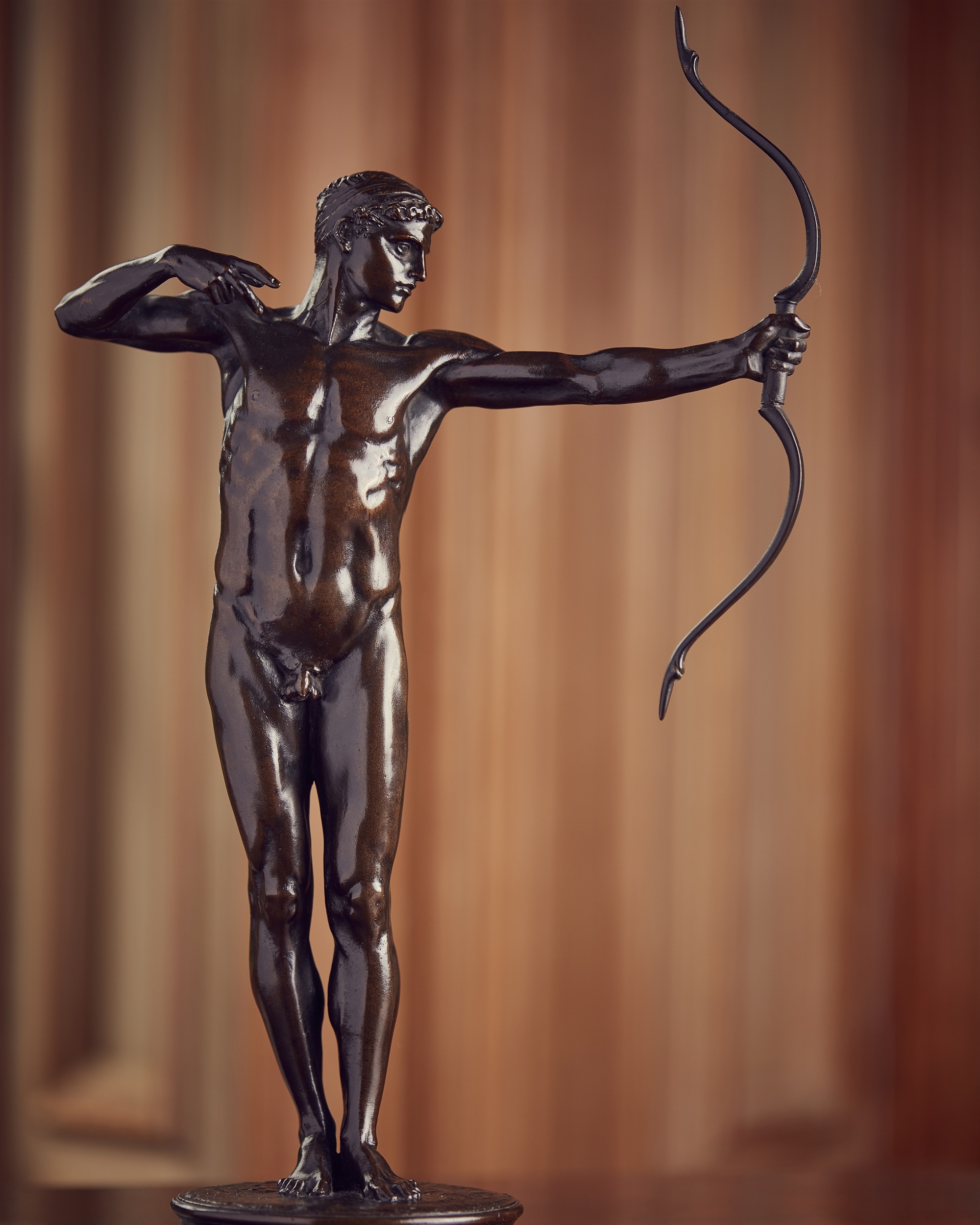 The champion Greek archer Teucer was one of the heroes of Homer’s story of the Trojan War. When this bronze was exhibited at the Royal Academy in 1882 a quotation from Pope’s translation of Homer was printed in the catalogue as the subject was unusual. Thornycroft admired the Elgin marbles, and his early works were in a Greek style. With ‘Teucer’, in emulation of the grandeur of Leighton’s ‘Athlete’, he made a monumental ideal nude.