Our MODERN MADE auction at The Mall Galleries in London on 23 October proved a resounding success.

The multi-discipline sale of modern and contemporary art, design and craft posted £800,000*, striking a chord with clients for whom 2020 has been a year to focus on the home.

“At this difficult moment, some collectors do have extra disposable income and more time to devote to their passion” said Head of Sale Philip Smith . “This type of sale is a perfect arena to starting a new collection, further their interest in the fields or look for an investment for the future.”

Important works from across the Modern British canon provided some of the high notes, headlined at £25,000* by The Red Curtain, a key Camden Town school work by William Ratcliffe (1870-1955). Dated to c.1916 - and included in The London Group held that year at the Goupil Gallery - this heavily impastoed oil shares many compositional similarities to The Artist’s Room, Letchworth in The Tate Gallery collection. Both works are thought to depict the Arts and Crafts style sitting room of 102 Wilbury Road in the new garden city of Letchworth - the home of fellow artist Stanley and Signe Parker. Ratcliffe and Parker (whose father was one of the architects of Letchworth) met while students at the Manchester School of Art. 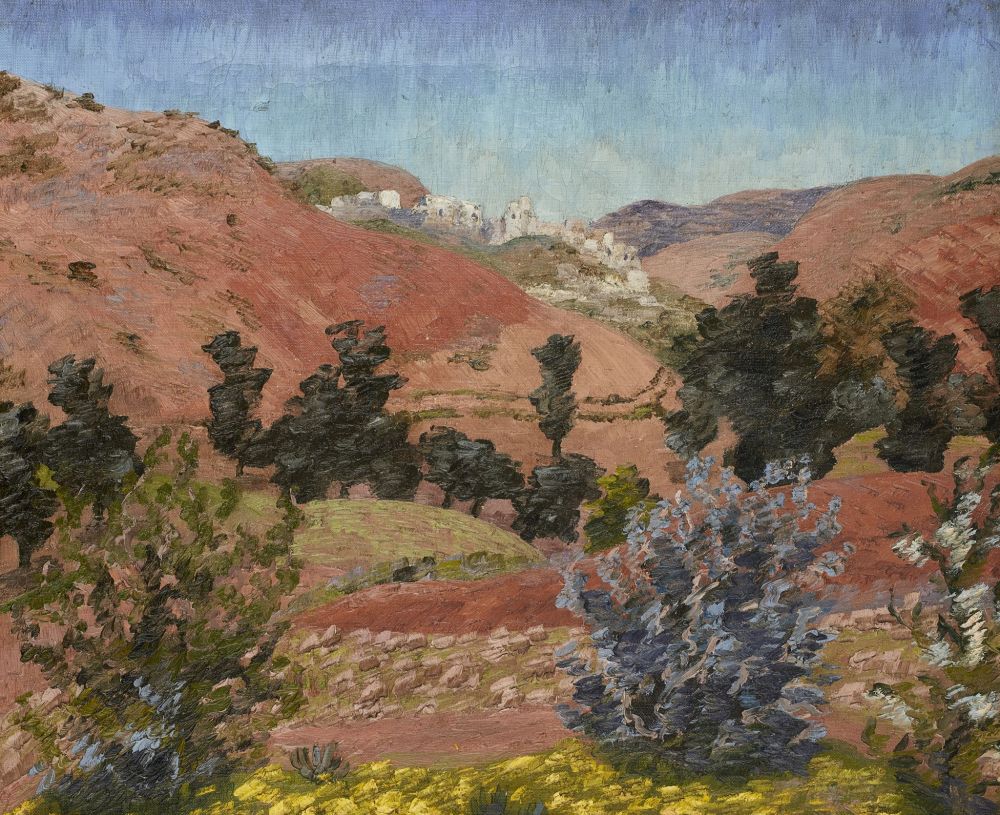 Sir Cedric Morris, continued his market purple patch when The Atlas Mountains, Morocco doubled hopes at £24,375*. The artist-plantsmen is best known for his vibrant botanical studies painted in his beloved Suffolk but this landscape was painted sometime between 1918 and 1926 during a winter trip away. Each year Cedric Morris and his partner Arthur Lett-Haines closed the East Anglian School of Painting and Drawing they ran from Benton End between March and October in order to travel abroad. This painting ha been given by the artist to Professor Bullock of the Old Rectory, Fen Ditton, Cambridgeshire.

A new addition to the forthcoming catalogue raisonné of Howard Hodgkin's work is the 1981 study Untitled (After Lunch). This initialled and dated work on Arches paper, a print overpainted in oil and gouache, had been given to the sculptor Jean Gibson (1927-1991) by Hodgkin in 1981. After the Howard Hodgkin Estate helped to authenticate and catalogue this lot, it commanded £18,750*.

The MODERN MADE series of sales celebrate the significant outpouring of artistic creativity seen throughout the decades of the 20th century across a range of mediums from ceramics to jewellery.

“The format - a showcase for the best of Modern Art across multiple disciplines - has proved incredibly popular, thought provoking and inspirational to clients. I would defy anyone not to find something of interest within the exhibition - and the results bear this out”, commented Philip Smith.

A total of 1381 bidders registered for the sale - around 1200 of the choosing to bid live online across four bidding platforms. Buyers from the UK, the US, continental Europe and Australia took part. 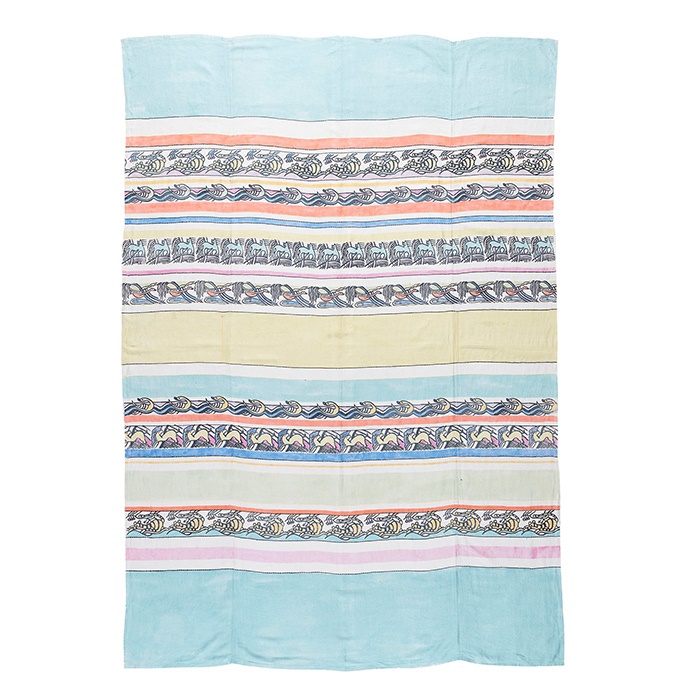 Textiles designed by William Scott, Henry Moore, Edward Bawden, Dame Elizabeth Frink and John Piper were included in the sale. This section was by a rare block-printed silk and linen bedspread made to a design by Percy Wyndham Lewis. Dating from c.1914 it was probably made at the short-lived Rebel Art Centre - the offshoot of the Omega Workshops set up by Lewis after disagreements with the Bloomsbury set. The vibrant design of repeating animal motifs and bands of pastel colour, is known from a number of other similar pieces sold at auction in the past decade. Estimated at £2000-3000, it took £11,875*.

A rare ceramic from the 'Pink Glove' tea service designed by Salvador Dali on a visit to London in 1936 sold for £4,750*. The unique service, made by Royal Crown Derby in 1926, was commissioned by the poet, artist and collector of Surrealist works Edward James for his extraordinary Surrealist house Monkton. Previously unknown correspondence between James and the decorating firm Green and Abbott mentions the 'pink glove tea set' alongside Dali’s famous 'Lobster' telephone, 'Mae West Lips' sofa and 'Torso' chest of drawers. The set, sold by Christies in 1986, was subsequently split with this 23cm diameter plate now one of only a couple of pieces from the set still known to be in private hands.

Studio ceramics punctuated the catalogue from beginning to end. Works by all of the major practitioners of the burgeoning British studio movement were included topped by Dame Lucie Rie’s 11cm wide footed bowl with bands of pink and turquoise c.1979 at £15,000* and Hans Coper’s textbook ‘Hourglass’ stoneware form layered with white porcelain slip c.1972 at £35,000*. Both pieces, bought by the vendor’s family directly from the artists’ studios, improved markedly on expectations. 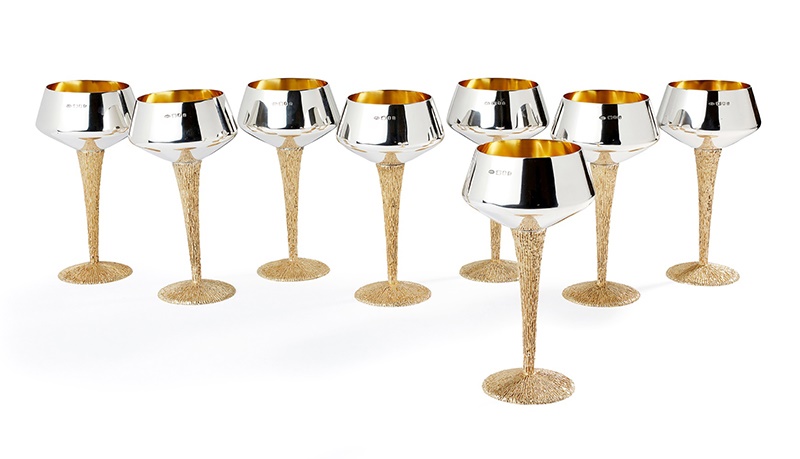 Post-war silver and jewellery - led by a textbook set of eight textured and gilt wine goblets by Stuart Devlin (London 1969) sold at £4,250* - included a pair of silver chandelier drop earrings with the maker's mark JAD for Alan Davie (1920-2014).

Although primarily considered a painter, through the 1940s and 1950s, Davie was also renowned as an avant-garde jewellery designer. Selling his wares through shops such Aspreys and Harrods, he made the jewellery worn by Vivien Leigh in the 1945 film Anthony and Cleopatra and went on to exhibit his work at the ground-breaking International Exhibition of Modern Jewellery, organised by the Company of Goldsmiths and the V&A in 1961. This pair of earrings, inspired by pre-Columbian goldwork, were given to the vendor in 1955 at which time Davie was teaching on the Design course at the Central School of Arts and Crafts in London. They sold at £3,500*.

Wendy Ramshaw (1939- 2018) is another artist-jeweller championed by the MODERN MADE sales since their inception in 2019. Ramshaw was first noticed in the 1960s when selling her colourful, flat-pack paper jewellery at Mary Quant’s London store Bazaar. Among her most recognised designs is the 'Orbits' series of nickel alloy and resin necklaces – the example here sold at £3,000. It had been purchased from The Crafts Council Shop at the V&A in 1990 by Alan and Pat Firth, the Yorkshire couple whose modest bungalow in Leeds was a shrine to a £1m collection of British studio pottery and crafts.

An outstanding selection of post-war jewellery by Copenhagen firm Georg Jensen was led by a Splash necklace in gold - one of Henning Koppel’s instantly recognisable minimalistic and organic forms. Purchased by the vendors in 1971 directly from Georg Jensen, it sold in its fitted blue silk box for £5500.

Scandinavian chic was displayed alongside works by some of the biggest names in mid-century Italian furniture design. A walnut rocking chair designed c.1955 by the Cassina Technical Group of which Gio Ponti (1891-79) was a part took £5,000 while a table lamp designed by the French master glass worker and decorator Max Ingrand (1908-1969) during his decade-long directorship of Fontana

Arte from 1954 made £9,375. Ingrand’s designs are still among the company’s best-selling products today but this 67cm high brass, glass and painted metal lamp was an original piece c.1956.

Discover more about our MODERN MADE: Modern & Post-War Art & Design and Studio Ceramics auctions
- held twice a year in London.  Next auction 29 April 2021 at The Mall Galleries in London

Learn more about MODERN MADE ⇒