Although Mattioli wrote on a range of subjects, and published translations of non-medical works, he is most celebrated for his work on botany and medicine, and of these works his best known are his translations of, and commentaries on, Dioscorides' De medica material.

Mattioli's first Italian translation from the Greek was published in Venice in 1544, and its 'original purpose was relatively modest: it was to provide doctors and apothecaries with a practical treatise in Italian with a commentary that would enable them to identify the medicinal plants mentioned by Dioscorides' (DSB IX, p.179). Further, expanded editions followed in 1548, 1550 and 1552, and the success of these editions, led Mattioli to translate the work into Latin in 1554. This translation was "enriched by synonyms in various languages, provided with a special commentary, and accompanied by numerous illustrations valuable for the identification of Dioscorides simples [which] rendered the work accessible to scholars throughout Europe. From then Mattioli's name was linked with that of Dioscorides" (DSB IX, p.179). 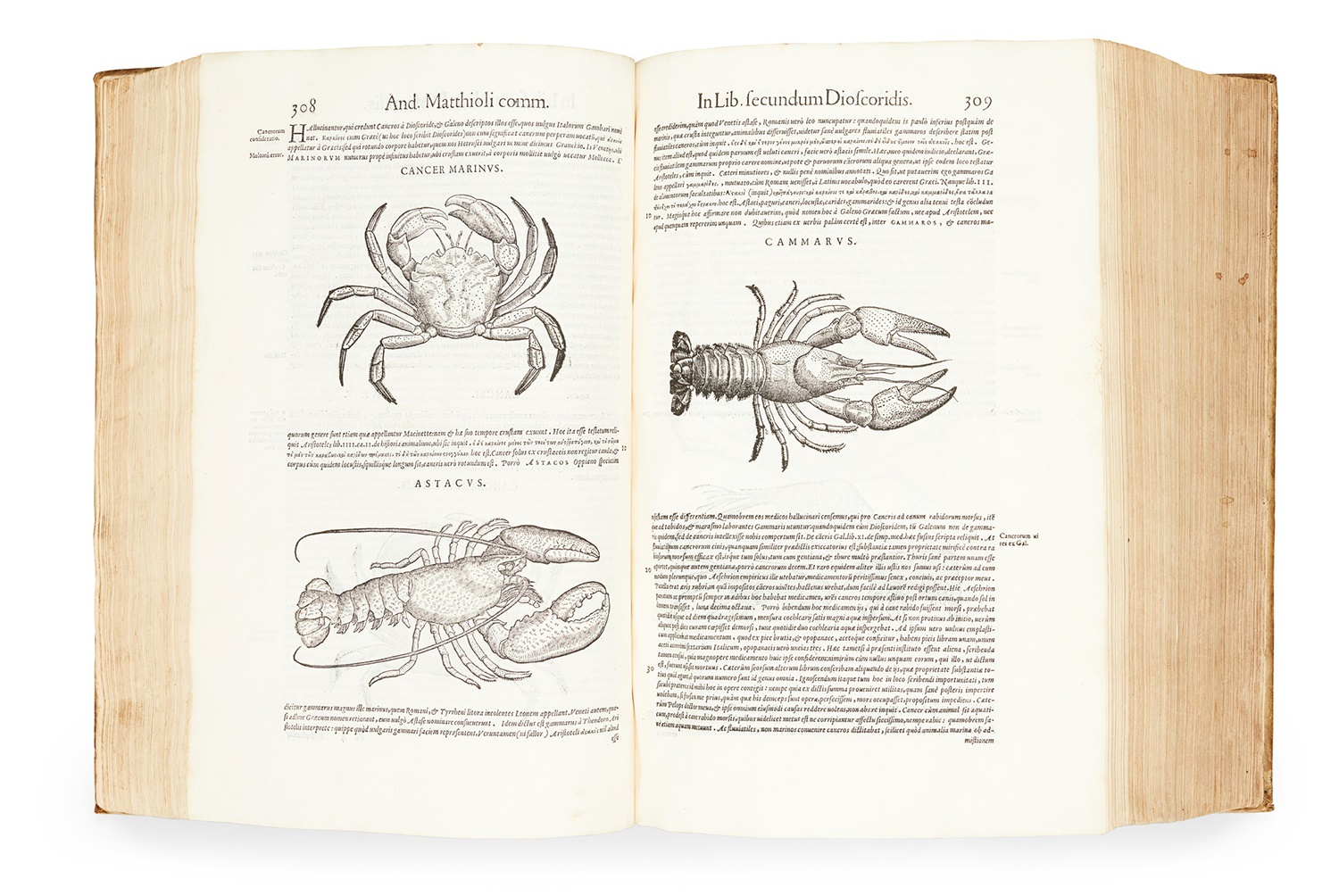 In addition to identifying the plants originally described by Dioscorides, Mattioli added descriptions of some plants not in Dioscorides and not of any known medical use, thus marking a transition from the study of plants as a field of medicine to a study of interest in its own right. In addition, the woodcuts in Mattioli's work were of an extremely high standard, allowing recognition of the plant even when the text was obscure. A noteworthy inclusion is an early variety of tomato, the first documented example of the vegetable being grown and eaten in Europe. 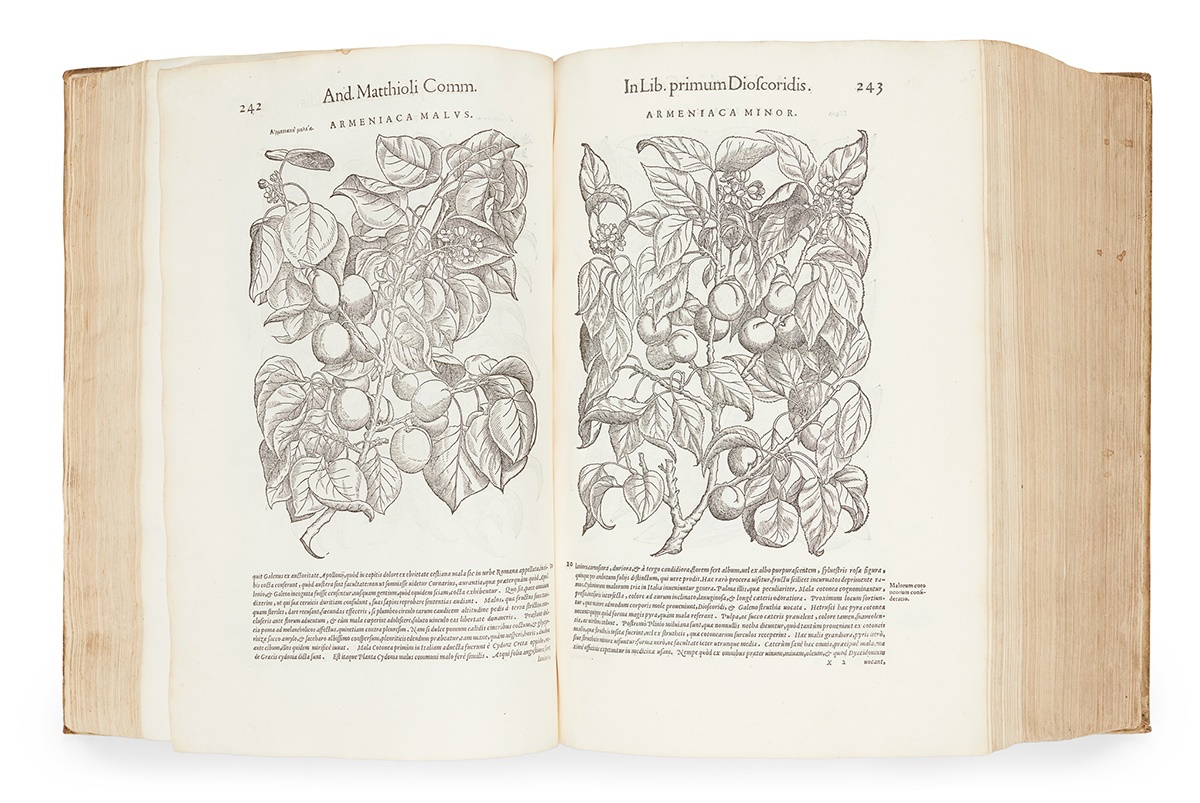 This wealth of additional material transformed Dioscorides' work from an antiquarian text into a contemporary physician's vade mecum, enhanced by Mattioli's own observations and many of his own drawings, which remained in print virtually continuously until the 18th century. 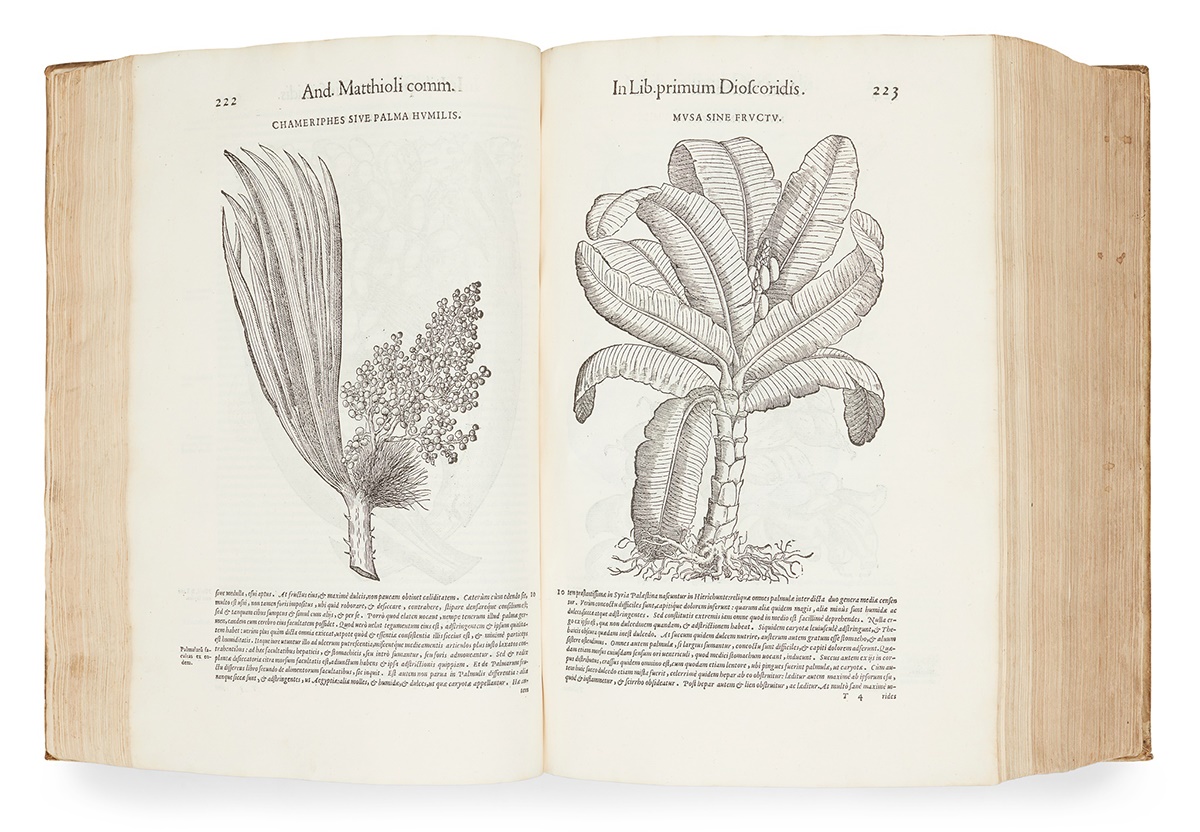 The 1565 edition, described by Brunet as 'la plus estimée', is considered the best for both its illustrations (first used here in a Latin edition), and text. The fine woodcut illustrations extend across the full width of the page: those of plants are by Giorgio Liberale and Wolfgang Meyerpeck (originally cut for Mattioli's New Kretterbuch (Prague: 1563), with the exception of 'Eruca sylvestris') and 'those of the Animals are new' BM(NH). Reference: Hunt 94.

This impressive work comes from the library of Andrew Fletcher of Saltoun (1653-1716). It was the largest private collection of books in Scotland at the turn of the seventeenth and eighteenth centuries. It is significant both in itself and because of the life of its owner. Of a legal and landed family - the estate of Saltoun lay not far from Edinburgh in the fertile country of East Lothian - Andrew Fletcher is famous in his own country as a consistent and eloquent opponent of the Union with England in 1707, a stance for which he became known as "the Patriot".