Life in the Imperial Qing Court

A Glimpse into Imperial Life

Our 5th November auction of Fine Asian & Islamic Works of Art features exceptional examples providing us with a glimpse of the imperial life of the Qing Court (1644-1911) - the last dynasty of imperial China.

This autumn, our Fine Asian & Islamic Works of Art sale will include some exceptional pieces which provide us with a  glimpse of the imperial life of the Qing Court (1644-1911) - the last dynasty of imperial China. Here, we take a closer look at a few of the highlights...

Furniture exquisitely carved and made in the highly prized zitan wood belongs to a special group of supreme Imperial furnishing. Zitan framed lanterns made use of this precious timber left over from the making of larger pieces of furniture. Detailed with elaborate carving and delicately pierced lattice borders, they are comparable to the architectural latticework found on doors, windows and balustrades of traditional Chinese Palaces. Translucent glass panels are inset into their frames and it is known that in the middle of the Qing dynasty glass replaced paper or silk in windows, so it is highly probable that glass also began to be used in lanterns at that time. Zitan and reverse-painted glass lanterns of similar form, bedecked with streamers and fringes, hang within the imperial wedding chamber in the Palace of Earthly Repose at the Forbidden City.

the domed cover crisply carved with gradually larger bands of ruyi-shaped cloud motif, centripetally arranged and faced except the border, carved and gilded to the underside with 'Pan Yun Bao He' (The Treasure Box of Ruyi Cloud), the box decorated further with two bands of counter facing ruyi cloud before the short straight foot, the base carved to the centre with a six-character Qianlong mark filled with gilt, all interior and base covered in black lacquer | (Qty: 1) 21.2cm diameter | £6,000 - £8,000 + fees

A rare cinnabar lacquer ‘ruyi’ cloud circular box, with a six-character Qianlong mark and a four-character ‘Pan Yun Bao He (The Treasure Box of Ruyi Cloud)’ in gilt, represents the Qing court’s endeavour in the inheritance of the Chinese lacquerware tradition. Lacquer is an organic material that is made from the excreted sap of the lacquer tree (Rhus verniciflua). It was first produced in the Shang Dynasty (1600–1046 BC) and widely applied on utensils with a wood or metal core in the Eastern Zhou Dynasty (771–256 BC). Carved lacquer of the Southern Song (1127-1279) and Yuan (1271-1368) periods often feature a newly invented abstract geometric design- ruyi cloud motif, or also known as ‘pommel scroll’ for it resembles the shape of the ring-pommel on early Chinese sword.

The design of carving with rows of ruyi cloud pattern often involved with intermittent red and black lacquer layers, known as tixi technique (meaning ‘marbled lacquer’), and rarely found in single-coloured lacquer as seen on the current example. A rectangular cinnabar lacquer dish with closely comparable deeply carved ruyi-cloud pattern on the whole dish, dated to the Qing dynasty 18th century, was in the Qing Court collection and now is in the National Palace Museum, Taipei (museum number Gu Qi 故漆141). 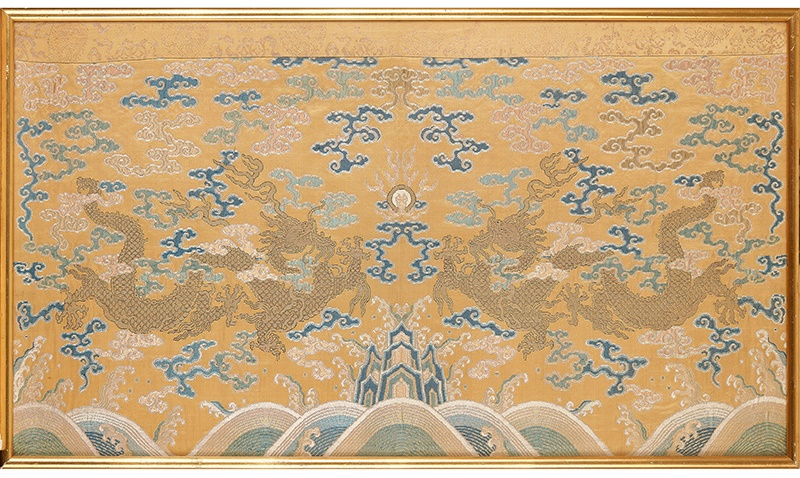 This imperial yellow-ground brocade ‘dragon’ panel embodies all the requirements of an imperial textile, created especially for the emperor’s residence. Palace furnishings of silk were used in the same way that we use them today – in many and varied forms: from covers for furniture, to curtains for windows or beds, above doorways, for altars, thrones and small seats, wall hangings. This panel may have been a table frontal, or the front portion from another piece of furniture covering and perhaps had a pleated, or straight narrow panel fixed along the top with matching design and requisite number of dragons.

It was customary in China that the silk furnishing fabrics for the emperor’s palaces, the state rooms and private apartments, should be of ‘bright yellow’ silk and indeed the same colour was used for costumes worn by the emperor, the dowager empress, the empress and first rank imperial concubine on formal occasions. The rules of design for the Palace furnishings were thus set out, based on close association with imperial symbolism, ancient belief and on numerology in relation to astronomy and repeated patterns of the movement of the moon and sun.

The elderly Miss Willis, writing about her gift, states that her uncle, Major General Swanston took covers from the Summer Palace furniture which narrows the possible use and while she mis-attributes the date to 1840, rather than 1860, the origin of the panel is likely to be accurate. At this distance in time it is not possible to pinpoint the exact use for every textile and we are left to admire the sophisticated weaving, the elegance of the design and the history and symbolism it embodies.

Viewing by appointment on 30 October - 05 November in 22 Connaught St, London