Following our sale of the only known example of Gandhi’s fingerprints in June 2021 for £86,000*, we are delighted to be offering 3 letters from Mohandas Gandhi as well as a pair of his personally made sandals in our 08 February Rare Books, Manuscripts, Maps & Photographs auction.

Mohandas Gandhi met Dr. Pranjivan J. Mehta on 6 November 1888 while studying law at the Inner Temple in London. They formed a life-long friendship and corresponded over many years when Dr. Mehta lived in Burma and Gandhi in South Africa and India. In 1909 for the first time Dr. Mehta referred to Gandhi as ‘Mahatma’ in a letter to Gopal K. Gokhale and in 1910 wrote a book on Gandhi entitled M.K. Gandhi and the South African Indian Problem. Dr. Mehta attended the Bombay session of the Indian National Congress, helped Gandhi with the construction of the 'Lal Kothi' or 'Red Bungalow' built near the Sabarmati Ashram, sent funds for Gandhi’s early freedom movement and the establishment of Gujarat Vidyapith University between 1919-22. In 1926, Dr. Mehta joined Gandhi to plan the Salt Satyagraha, and in 1929 Gandhi visited and stayed with Dr. Mehta in Rangoon. While in Yerwada Jail in Pune Gandhi had a premonition that Dr Mehta’s latest illness would prove fatal, and Dr. Mehta died on 3rd August 1932. The three letters for sale on 8 February 2023 are all in Gujarati. 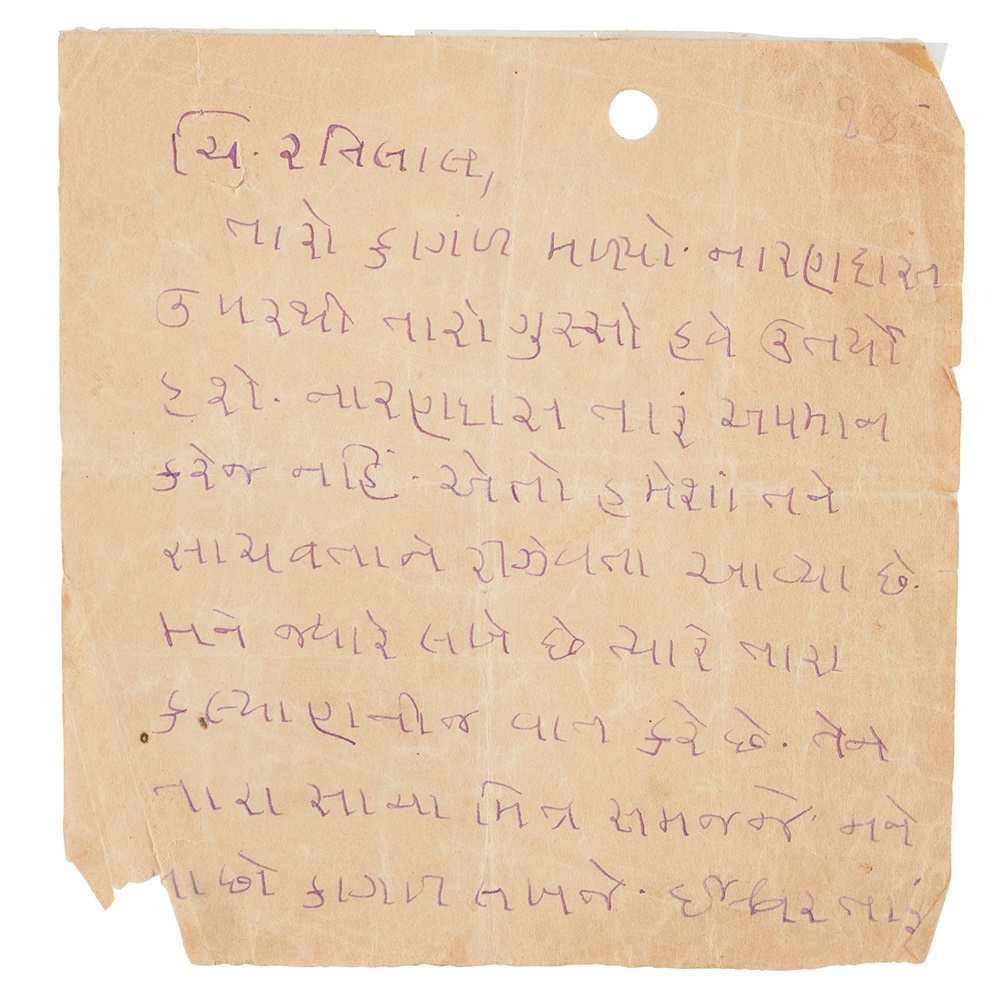 The first letter is to Ratilal Mehta, Dr. P.J. Mehta’s son, regarding a misunderstanding between Ratilal and Narandas Gandhi. 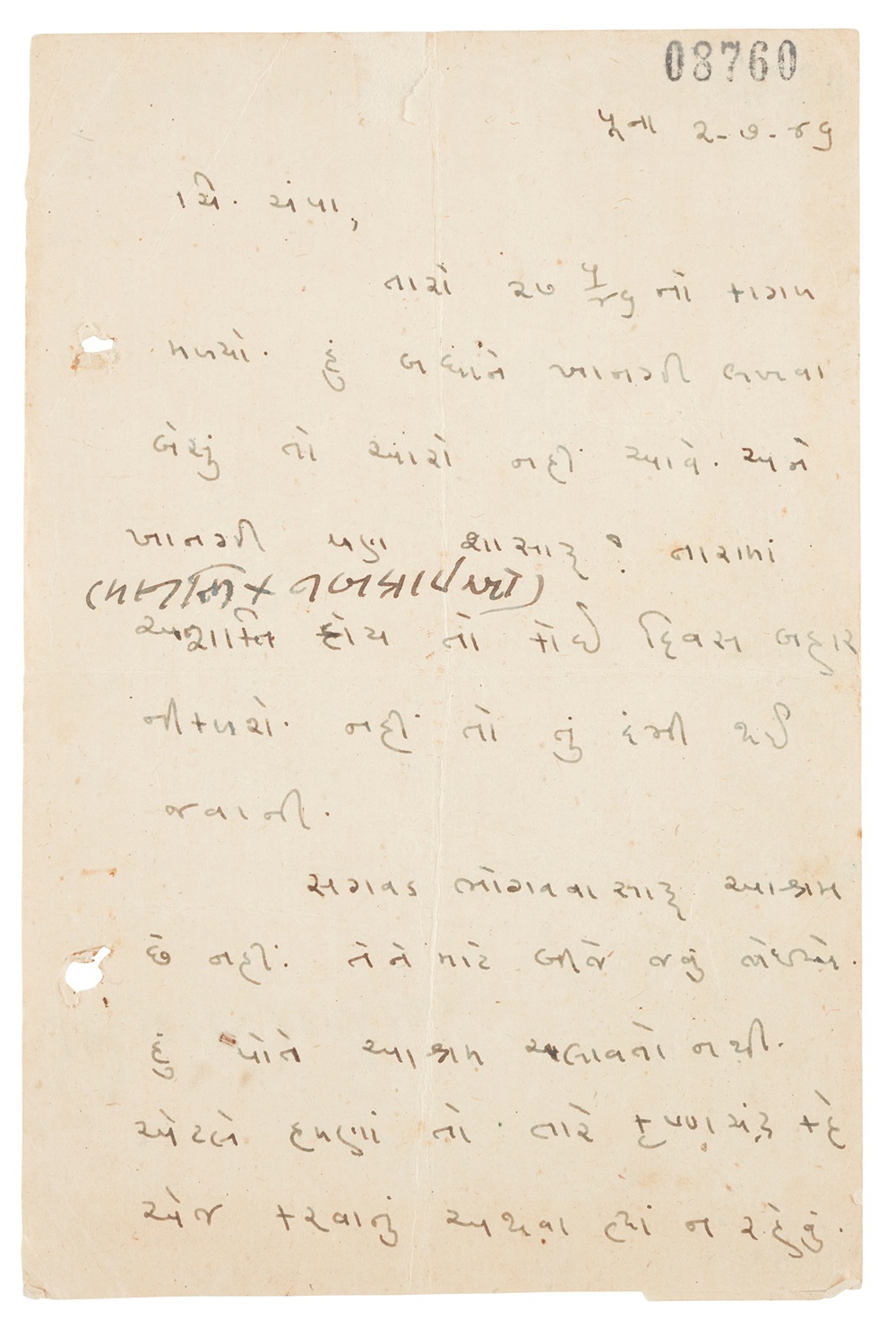 The second letter is a strongly admonitory letter to Mrs Champa Mehta, Dr P.J.’s Mehta’s daughter-in-law, rebutting her criticism of the ashram, stressing that it is not a place for worldly comforts, implying that if she cannot obey the rules enforced by Kirshnachandra she should leave the ashram, & recommending her a suitable diet. 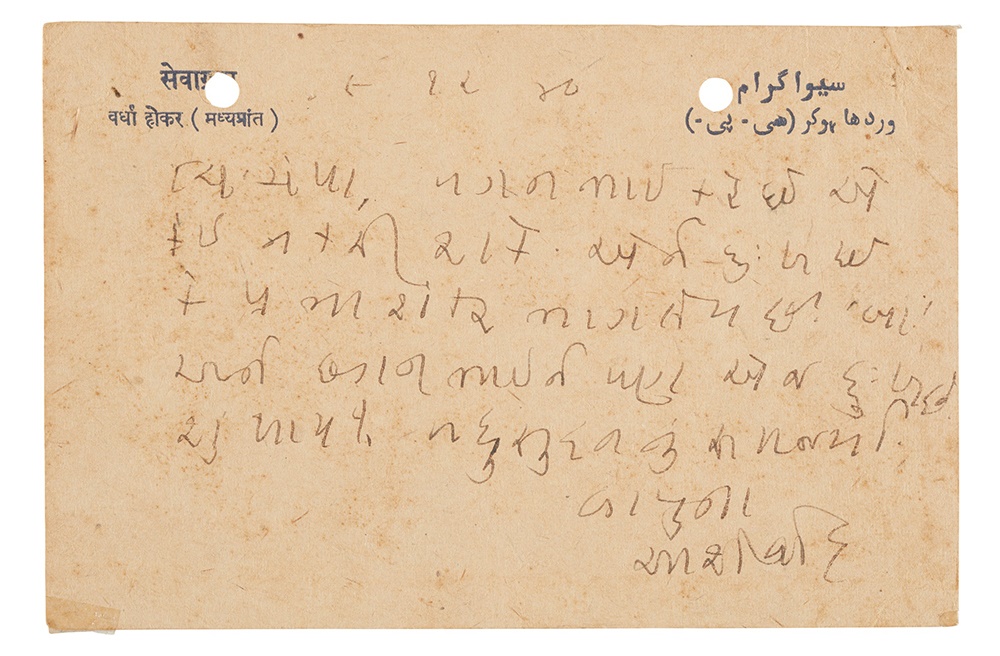 The last letter, also to Mrs Champa Mehta, shows Gandhi intervening in a Mehta family dispute regarding an estate, reassuring Champa that Magan, Champa’s brother-in-law, will selflessly ensure that she gets more than a fair share to the estate. The letter also refers to Gandhi’s wife, Kasturba ‘Baa’ and Khan Abdul Gaffar Khan.

Also in the sale is a pair of Gandhi’s sandals, from the collection of Dr Balvantrai N. Kanuga (1878-1949), a medical practitioner of Ahmedabad, Gandhi's personal long-term physician and friend. At Tolstoy Farm, near Johannesburg, Gandhi developed his philosophy of satyagraha, central to which was self-reliance including the making of clothes and footwear. In 1910 Gandhi dispatched Herman Kallenbach (1871-1945), one of his foremost friends and associates, who had gifted the farm to Gandhi, to the Trappist monastery at Marianhill near Pinetown to learn the skill of sandal-making and on his return Gandhi learnt to make sandals.