at the Bookmark Book Festival

The artist, writer and broadcaster Lachlan Goudie will be ‘in conversation’ with Alice Strang, Senior Specialist in Modern and Contemporary Art, about his book The Story of Scottish Art, at the Bookmark Book Festival on Saturday 8 October 2022, sponsored by Lyon & Turnbull.

Lachlan’s award-winning practice encompasses portraiture, still life and landscape painting. A regular exhibitor in London, Edinburgh and New York, Goudie was elected a member of the Royal Institute of Oil Painters in 2013. He is also a leading television and radio broadcaster about the visual arts. For example, he wrote and presented the 2015 landmark four-episode series The Story of Scottish Art for which he was nominated for the Royal Television Society Scotland 'Onscreen Personality of the Year' award – to which Alice was a contributor.

Cover of Lachlan Goudie's book, The Story of Scottish Art, published by Thames and Hudson

The BBC series informed Lachlan's first book, The Story of Scottish Art, which was published by Thames and Hudson in 2020. They describe it as "a page-turning narrative full of scandals and rebellions, seismic historical events and personal tragedies that inspired or destroyed artists" and explain that it tells "the epic story of how 5000 years of creativity defined a nation – from the earliest Neolithic symbols etched onto the landscape of Kilmartin Glen to Glasgow’s fame as a contemporary centre of artistic innovation." Its cover features a detail of Arthur Meville's Dancers at the Moulin Rouge of 1899, which was purchased by the National Galleries of Scotland in 1995. The ‘in conversation’ event celebrates the recent release of the paperback version of the book.

The Bookmark Book Festival was founded in 2012 and is centred on Blairgowrie in Perthshire. The main focus of its activities is a three-day festival in October, at which established and up-and-coming writers celebrate "the best of the world of books from Scotland and beyond". 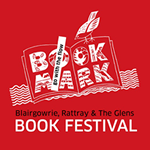