A coconut collecting box, once in the possession of one of Scotland’s most famous missionaries, John Paton, is amongst the highlights being offered at our African and Oceanic Art & Antiquities sale on Wednesday 1st May. Specialist Alex Tweedy takes up the story of Paton and his journey from Dumfries to the cannibal islands of the New Hebrides.

Born in a small thatched cottage on the farm of Braehead, Dumfries, one of nine children, John Paton’s rural upbringing in western Scotland was an unimaginable world apart from the lands where he would spend the majority of his adult life.

Whilst growing up, John’s father, also a deeply religious man, had instilled in him a strong sense of Christian identity that seemingly never left him:

“Never, in temple or cathedral, on mountain or in glen, can I hope to feel that the Lord God is more near, more visibly walking and talking with men, than under that humble cottage roof of thatch and oaken wattles.”

Photograph from the New Hebrides Mission

From an early age, Paton felt called to serve overseas as a missionary. No doubt there was a youthful desire to explore and see the world, but there was also an overwhelming religious fervour that would push him to places where the risk of disease and violent death were high.

After time spent working in the slums of Glasgow, Paton was ordained on the 23rd March 1858 and just three weeks later he set sail from Scotland to the South Pacific with his wife, Mary. His destination was the island chain of the New Hebrides, modern day Vanuatu.

At this time the New Hebrides had a fearsome reputation for cannibalism, inter-tribal warfare and violence towards outsiders. Indeed just nineteen years previously the famous English missionary John Williams and his associate James Harris had been killed and eaten on the island of Erromango, an event which still loomed large in the public consciousness in Paton’s time. He related a conversation he had with an elderly gentleman before setting off from Glasgow:

“Amongst many who sought to deter me, was one dear old Christian gentleman, whose crowning argument always was, "The Cannibals! you will be eaten by Cannibals! " At last I replied, "Mr. Dickson, you are advanced in years now, and your own prospect is soon to be laid in the grave, there to be eaten by worms ; I confess to you, that if I can but live and die serving and honouring the Lord Jesus, it will make no difference to me whether I am eaten by cannibals or by worms.”

Arriving on the volcanic island of Tanna (a neighbouring island to Erromango), John was cautiously welcomed by the inhabitants around the south coast where he had landed. He settled in the old wooden house of two previous missionaries who had been driven off some years before. However, Paton was quickly exposed to the realities of life when he was forced to hide out in the bush as a battle between two rival clans raged around him. For a full day the groups hunted one another, but as dusk began to fall and the clamour died down Paton relayed the following horrifying scene in his diary:

“The noise and the discharge of muskets gradually receded, as if the inland [attacking] people were retiring and towards evening the people around us returned to their villages. We were afterwards informed that five or six men had been shot dead and that their bodies had been carried by the conquerors from the field of battle, and cooked and eaten that very night at a boiling spring near the head of the bay, less than a mile from the spot where my house was being built. When our tea was wanted next morning, a boy who came with us could not be found. After a while of great anxiety on our part, he returned, saying, "Missi, this is a dark land. The people of this land do dark works. At the boiling spring they have cooked and feasted upon the slain. They have washed the blood into the water, they have bathed there, polluting everything. I cannot get pure water to make your tea.”

And yet, as the months wore on, Paton began to learn elements of the local language and began to gather around him some followers. He even felt comfortable enough to have Mary come and join him on the island, where she gave birth to a son, Peter. Tragically though, just nineteen days later, Mary died from tropical fever and was soon followed by their baby son (their graves can still be found on the island now). The grief stricken John Paton was once again left alone to face the dangers of his situation. His problems were compounded when a great sickness began to sweep the island, one for which Paton and his “sorcery” was blamed. Local people began to openly debate killing him, his possessions were often stolen and there were multiple attempts on his life. To make matters worse, western traders now refused to land on Tanna and sell the much sought after items of metal tools, tobacco and weaponry to the islanders whilst Paton still resided there. They felt that his preaching and conversation of the island risked cutting into their successful trading monopolies. Later, under pressure from these same traders, villagers on a neighbouring island murdered two missionaries and sailed to Tanna to encourage them to kill Paton. Eventually, opinion became so united against him that he was forced to flee in the dead of night to a friendly enclave from where he was able to escape.

His passion undimmed, Paton returned to Scotland to raise awareness of his New Hebrides mission; it was during this time that he married for a second time, to Margaret Whitecross. Arriving back in the South Seas in 1866, it was considered certain death to return to Tanna and the pair established a new Mission station on the tiny neighbouring island of Aniwa, a tiny speck of land just three square miles. They built a small hut and began to raise a family there. At first progress was slow:

“The Aniwans were not so violently dishonourable as the Tannese. But they had the knack of asking in a rather menacing manner whatever they coveted; and the tomahawk was sometimes swung to enforce an appeal.”

Over time though, Paton began to build the community on Aniwa, building a Church and two further houses for orphaned children. During the construction of one of the buildings there occurred a seminal moment in the conversion of the island, what Paton would later refer to as “the miracle of the speaking bit of wood”

“While working at the house, I required some nails and tools. Lifting a piece of planed wood, I pencilled a few words on it, and requested our old chief to carry it to Mrs. Paton, and she would send what I wanted. In blank wonder, he innocently stared at me and said, "But what do you want ? "I replied, "The wood will tell her." He looked rather angry, thinking that I befooled him, and retorted, "Who ever heard of wood speaking ? " By hard pleading succeeded in persuading him to go. He was amazed to see her looking at the wood and then fetching the needed articles. He brought back the bit of wood, and eagerly made signs for an explanation.”

From this moment the chief became determined to learn the secrets of the “speaking wood” and Paton taught him to read, using the Bible as the text. Others came to them to learn, a school was built and teachers were trained. Margaret Paton taught a class of about fifty women and girls who became experts at sewing (producing woven hats to sell) and reading. By the time the Paton’s left Aniwa for Australia after thirty years the entire island (and large areas of Tanna) had been converted to Christianity. 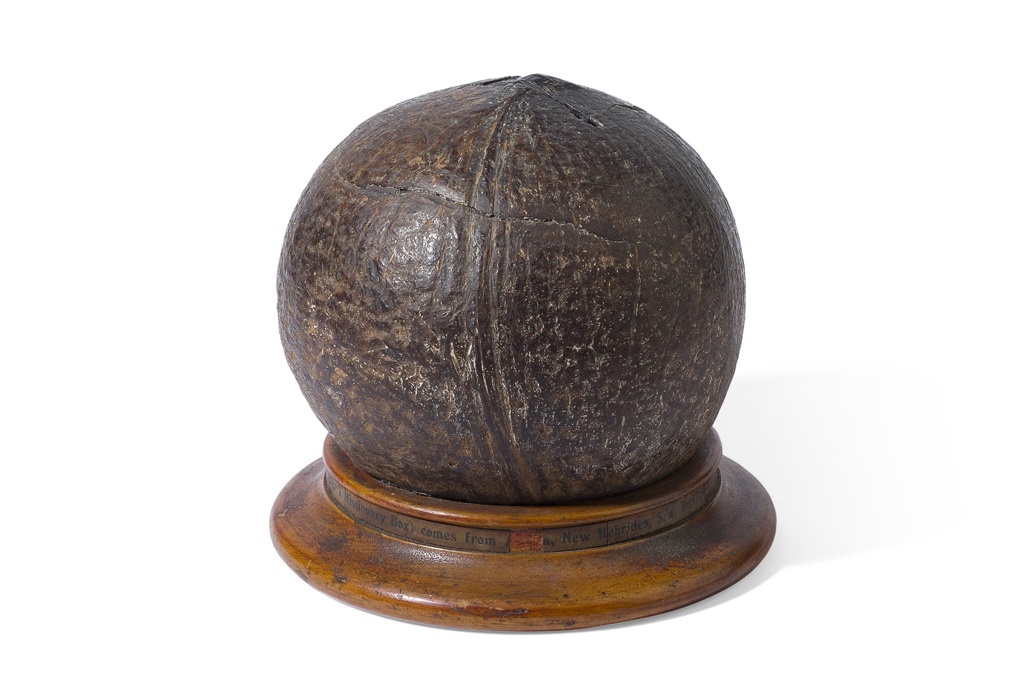 At some point in the intervening decades between their landing on Aniwa and their final retirement in Victoria, John Paton picked up the coconut shown here in the Aniwan sands. It was transported halfway around the world to the west coast of Scotland where it was rattled at Church services and on the streets of Glasgow for another seventy years. Whatever the modern interpretations of such missions, Paton remains a revered figure on the islands of Tanna and Aniwa to this day, where his wife and baby’s grave on Tanna is still tended and the story of his conversion of the Aniwans with the “talking wood” is still told to the occasional passing visitor. This missionary box, though a seemingly simple object, is a witness to human resilience and determination, and the colliding of two very different worlds.