We are delighted to be offering a collection of works by this uniquely expressive, and enduringly popular artist in our Scottish Paintings & Sculpture auction.

Joan Eardley (1921-1963) is recognised as one of the great talents of 20th century Scottish art, capturing the essence of some distinctly Scottish places; from the energy and community of a quickly disappearing urban way of life in the east end of Glasgow, to the drama and brutality of varying weather effects on the small fishing village of Catterline.

In June 2019, we are delighted to be offering a collection of five works by this uniquely expressive, and enduringly popular artist in our Scottish Paintings & Sculpture auction. The five works cover a range of Eardley’s key techniques and talents offering a wonderful opportunity to engage with the strength and variety of her work, from bold, thickly applied oil paintings to charming and evocative pastels.

The Tod Lighthouse, Catterline, offers a spectacular view of Eardley’s beloved home on the north east coast of Scotland, just south of Aberdeen. The wide-angled view takes in the lighthouse to the right, and runs across the offing, below which Eardley’s exuberant, expressive brushstrokes convey the tumultuous, crashing energy of the waves. The primal power of the sea is expressed, and we are drawn into the materiality of her paint, as we are drawn to the enduring eternal rhythms of the sea.

A further three of these artworks take us to the east end of Glasgow, Eardley’s other home, and an area that greatly inspired her artistic work. Most famously she worked on a series of pastel sketches of the local children, encouraging them to sit for her in exchange for sweets and comics. Yet in these works, she turns her attention to the structures inhabited by her sitters, boldly capturing the slanting lines and everyday details of this way of life in both pastel and oil. Eardley’s colour choices enliven the details amongst the bold dark lines and sections of dense pigment in A Glasgow Tenement, delineating windows in citron and orange and lines of drying laundry in a pale blue-grey. The vibrant colour and energetic brushwork of Glasgow Tenement reveals the beauty Eardley found in this ordinary street, and the specific vitality she saw in the area. This was a way of life that was quickly disappearing, as we can see in Tenement from Wasteground, where the buildings rise beyond the abandoned area we view them from; the building we see will soon go the same way. The communities here live side by side with emptiness and dirt, and Eardley communicates these rough edges but also the joy that she experiences there. 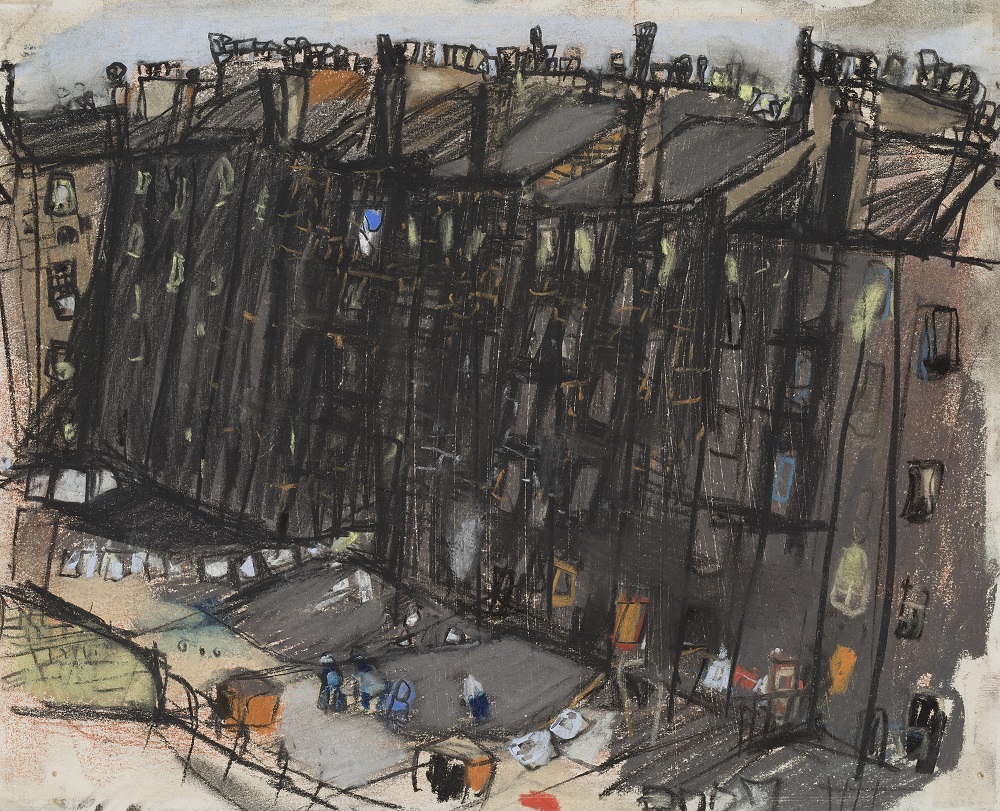 In Pensive Young Man, Eardley captures an altogether quieter scene – a moment of internal reflection. It peace and gentleness is reflected in her choice of perspective, looking over the shoulder of the subject, and the soft muted tones, which she handles with sophistication and ease.

In all these works, a reverence and beauty arises out of an image that at first glance may seem messy or chaotic. In essence, this is Eardley’s distinct skill in art; she was always led by the dynamism and essence of her subjects – the squinty, sloping lines of Glasgow streets and tenement walls, the awe-inspiring drama of the Catterline coast or an individual lost within their own thoughts - her techniques are selected under their influence. These disparate, and often temperamental, Scottish subjects are beautifully and sensitively captured so we are drawn in as she reveals the beauty and drama of the everyday across Scotland – from dramatic coastal weather, through emotional contemplation to laundry and the ordinary business of living.