We were delighted to present this special edition Jacobite banknote print from the Strange Plate, the first in a run of twenty-two, auctioned in aid of the West Highland Museum's exciting re-development and conservation plan, in our August 2021 Scottish Works of Art & Whisky auction.

The print taken from the original 1746 copper plate engraved by Robert Strange, showing four banknotes one penny, two pence, three pence and six pence denominations, with four others left blank, the central motif of intertwined initials CP within a rococo cartouche with thistle emanating and surmounted by crowned Prince of Wales Feathers, with trophy of arms behind, raised on an architectural plinth. Contained in a handmade beach wood frame, numbered 1 of 22 and signed.

Taken from an original relic of the 45‘, this contemporary print continues the Jacobite tradition of fundraising for their Cause, yet this time all proceeds raised will help fund the cause of the West Highland Museum in Fort William. This print is the first of twenty-two in total, produced by the Edinburgh Print Makers in 2021 to mark the 100th Anniversary of the Museum itself, in an effort to raise funds for an exciting re-development and conservation plan; Lyon & Turnbull were delighted to help with the sale of this remarkable piece.

Dating back to the turbulent days preceding the Battle of Culloden in 1746, this plate certainly has an interesting and eventful history. Commissioned directly by Prince Charles Edward Stuart at the height of his campaign, and indeed only a few days prior to the fateful Battle of Culloden, it was necessitated by the shortage of funds owing from an expensive crusade through 1745-6 and the loss or theft of various shipments of gold from France and Spain. The proposed notes were intended to pay his troops and continue to fund the campaign and, interestingly, it is known they were only redeemable on his successful restoration of the Stuart throne. This not only illustrates Prince Charles’s belief in the certainty of his success, but the belief his men had in him and the cause itself.

Over the course of two personal meetings in April 1746 Robert Strange (latterly Sir Robert Strange), an engraver from Edinburgh and a member of Prince Charles’ Lifeguards regiment, was directed by the Prince to create the engraving plates for the banknotes. Strange was an obvious choice for the engraving. As an ardent Jacobite he is known to have engraved the fabled Jacobite ‘Amen Glasses’ and is believed to have produced printed and hand-coloured fans for the ladies in attendance at the Holyrood Ball, celebrating the Jacobite campaign’s success. In 1786 he was knighted by the Hanoverian King George III after viewing an engraving Strange created of his two sons.

In the present lot, the central motif of CP ‘Carolus Princeps’ (Prince Charles), within a swept cartouche featuring thistles and crowned Prince of Wales Feathers, is an exact representation of a recently discovered silver cartouche in the collection of The Battle of Falkirk Muir Trust, which must now be considered the original pattern. This was presumably given to Strange by the Prince as an instruction of the design, further demonstrating his strong interest in the production process. It should be noted that unlike modern day banknotes, these notes were a personal guarantee, not backed by a bank or institution. With this in mind, compelling symbols such as the Princes’ Royal crest and personal cipher not only added great value but were considered a ‘true’ guarantee.

However, the commission was not without issue as Strange could not find paper of significant quality or a working printing press in Inverness. After sourcing copper to make the plate, he soon discovered that it’s quality was equally not up to standard, and as a result had to convince a carpenter with a mechanical understanding to work on the sabbath and build him a printing press. Ultimately though, this press would not be used; with the disastrous outcome of Culloden, Prince Charles and his supporters fled, together with the plate and other valuables, towards exile.

While the plate’s early history is well recorded, there are fascinating gaps in its life after Culloden. It was lost but then found some 90 years later at the West end of Loch Laggan. Here the Ath a Mheirlich, the “Thieves Ford”, crosses the River Spean as it emerges from Loch Laggan. The Prince crossed this Ford late on the 28th July 1746 on his way to seek refuge in “Cluny’s cage on Ben Alder.

The Plate came into the possession of General Hugh Ross of Glenmoidart, a son of the manse of Kilmonivaig, until he gifted it to Macpherson of Cluny and the Cluny Castle collection in 1864. Cluny brought it to national attention in 1865, in the Proceedings of the Society of Antiquaries of Scotland. It would remain in the possession of the Macphersons until it was sold as part of a wider sale of the collection by Sotheby’s of London in 1928, where it was acquired by the West Highland Museum. 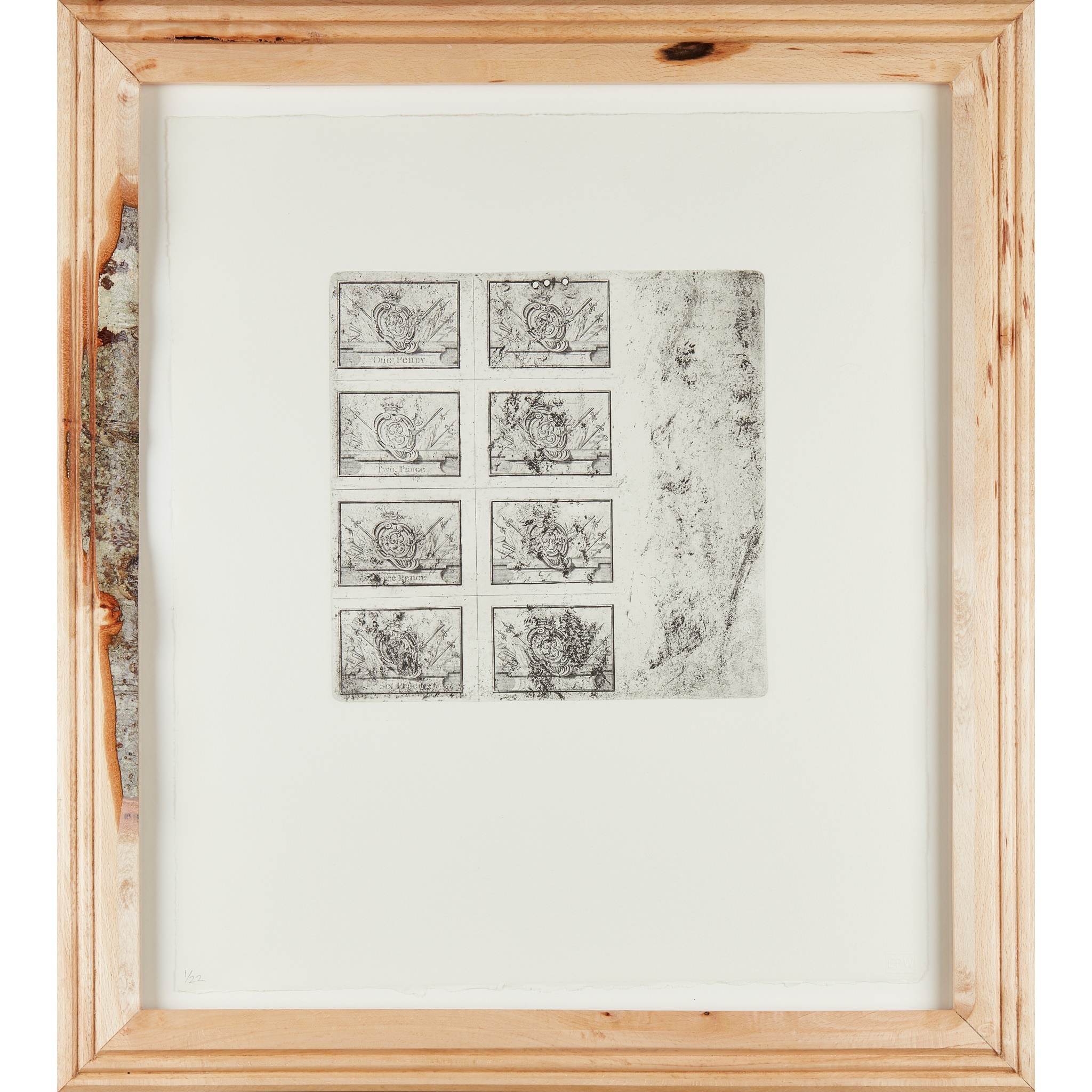 Almost immediately, under the care of renowned Scottish artist and printmaker Sir D Y Cameron RSA, fifty-seven prints were made to be sold to raise funds for the Museum and presumably help pay for the purchase of the plate itself. Unsurprisingly, the prints sold quickly and rarely appear on the market; some are known in private collections and until 2019 and 2020, when two were sold by Lyon & Turnbull, it had been some time since any were purchased on the market.

Great care has been taken to ensure the preservation of the plate while working with it and specialist advice has been taken at all turns. Under the expert eye of Edinburgh Print Makers, twenty-two additional notes have been printed, seventeen of which will be sold (the others retained within the museum collection).

This print, the first from the run, has been framed using wood from the “Beech Avenue” at Achnacarry, planted at the time of the uprising in 1745, and now reaching the end of its natural life.

The wooded avenue, alongside the River Arkaig, was planted by Donald Cameron of Lochiel, XIX Chief of Clan Cameron, without whose eventual support the ’45 campaign would never have taken place. Lochiel had been in the process of planting the tree-lined avenue to Achnacarry House when the call to muster at Glenfinnan came in. In his haste to join the Prince, the seedling trees were swiftly planted in groups rather than in a planned avenue along the drive, where they grew to full maturity. The recently harvested wood has been turned into a fitting frame for such an iconic print, and with tradition at the very heart of the work.

With thanks to all those involved in this wonderful project, including (but not limited to):

Cameron of Lochiel and the estate Manager of Achnacarry

Held once a year, every August, our specialist auction that showcases the cross section of the arts of the Jacobite period that played such an important role within the movement; from the traditional portraits, miniatures, fine silver, antique arms and rare manuscripts to the romantic and provoking relics of the rebellion and people within.