Decoration in the Style of William Burges

Originally plain, this Victorian Gothic Revival cabinet has been decorated, circa 2000, as a homage to the work of William Burges and the decorative schemes for his home, the Tower House, in London. This wonderfully detailed cabinet was offered in our 23 October 2019 of Decorative Arts: Design since 1860 auction in Edinburgh.

This cabinet demonstrates stylistic characteristics of furniture produced by John Starling Chapple and The Cardiff Workshops of Lord Bute. The top of this cabinet has a pitched roof with a gable, and includes other architectural arrangements observed on Burges’ Great Bookcase, with carved columns as seen on Burges’ Yatman' Cabinet and Writing Cabinet, the latter a collaboration between Burges and W. Gaulbert Saunders.

Originally designed without decoration, this Victorian Gothic Revival cabinet has been decorated, circa 2000, as a homage to the work of William Burges and the decorative schemes for his home, the Tower House, in London. Architect and designer, William Burges was one of the most important and innovative designers working in the 19th century Gothic Revival style. The sides of the cabinet bear later painted panels celebrating the two elements of Burges’ career, set under depictions of heavenly gardeners. In one, after Burges as Architect by Frederick Weekes, Burges works alongside a model of his Holland Park home, The Tower House. In the second, Burges is shown in his capacity as a builder.

Centrally, five painted scenes represent the trades of carpentry, pottery, metalwork, stone-masonry and leather-work, in the style of Henry Stacy Marks RA, who completed a number of murals and tiles for The Tower House. 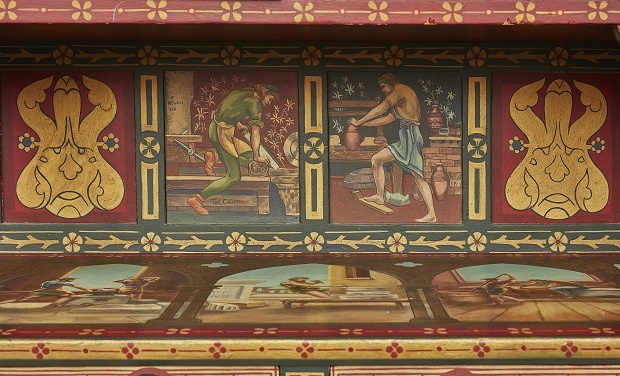 Four designs on the inside of the cabinet doors show craftsmen's tools and materials within gold borders, referencing those found within the library's bookcases in the Tower House. The feet of the cabinet are further decorated with armed mice and toads, in battle: such characters are seen on beams in the Butterfly Room at The Tower House.

Somewhat an homage to Burges, painted borders include porcupine motifs and gold branches set against red ground, found on Burges’ Architecture Cabinet and Sideboard respectively. Further details include five-petal floral motifs and quatrefoils, as well as depictions of the Green Man. This beautifully decorated cabinet was offered in our 23 October 2019 Decorative Arts: Design since 1860 auction in Edinburgh.