Discover Lamb’s painting of the Berkshire hamlet Lambourn Woodlands, which features in our 14th July Paintings & Works on Paper auction.

Henry Lamb had been a founding member of the Camden Town Group in 1911, which sought to ‘advance public awareness of contemporary visual art by holding exhibitions annually’. Lamb was particularly close with member Augustus John, who had tutored Lamb when he first moved to London at the age of twenty-two; the pair subsequently moved to Paris for a spell.

Lamb also had some involvement with the Bloomsbury Group but often expressed his frustration with its members, and in later years would distance himself from their activities. The Bloomsbury member with which he remained closest was Lytton Strachey, author of Eminent Victorians. Strachey was the subject of Lamb’s most celebrated portrait, which was painted in 1914 and is now in the collection of Tate Britain.

In the First World War Henry Lamb served as a military surgeon in France, Palestine and Macedonia. Following Lamb’s demobilisation in 1919, he found himself increasingly drawn to the English countryside. 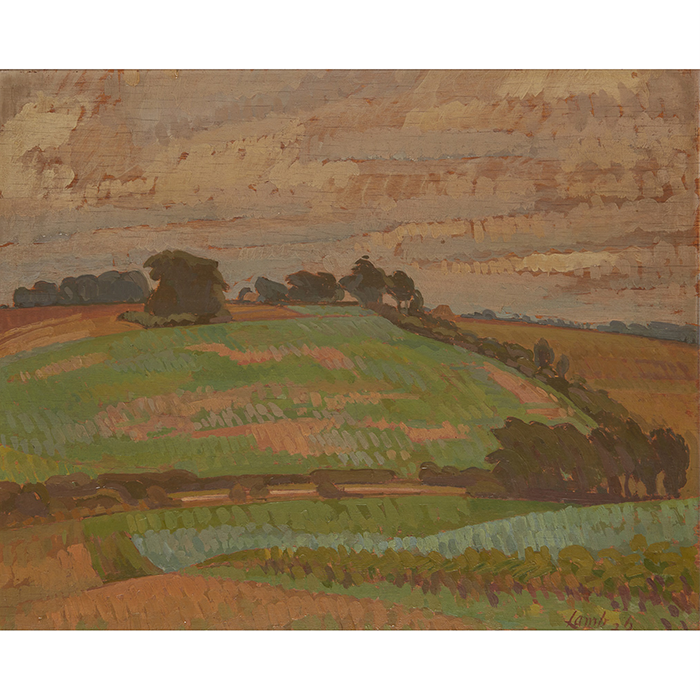 In the 1920s and ‘30s, Lamb established himself as an accomplished portrait-painter. In the late ‘20s he met Lady Pansy Pakenham, and the couple relocated to Wiltshire. From their home in the village of Coombe Bisset, Lamb travelled to various stately homes across England to fulfil portrait commissions, occasionally pausing to make his own studies of postwar English topography. He also maintained a studio in Kensington where he would develop his compositions. By 1938, his stature was such that he was commissioned by the Friends of Birmingham to paint Prime Minister Neville Chamberlain; the resulting portrait now hangs in the National Portrait Gallery.

In 1924 Lytton Strachey moved into Ham Spray House near the Wiltshire border, around 10 miles from Lambourn Woodlands. It is possible that Lamb fulfilled this evocative landscape painting while visiting Strachey.

Lamb’s pre-war technique was one of intense precision, but from the 1920s he implemented broader suggestive mark-making to more impressionistic effect. Energetic parallel brushstrokes conjure dappled light and breezy fields in May, Lambourn Woodlands, evoking the transitional atmosphere of the Berkshire countryside in late spring. A portrait painted in the same year of Joan Pernel Strachey, Lytton’s sister (now in the collection of Newnham College, Cambridge), is similarly constructed of dynamic rows of vibrant, confidently-applied pigment, which Laura Grace Simpkins interprets as Lamb’s ‘comment on the uniqueness and unpredictability’ of his subject’. [Simpkins, L. G., Henry Lamb: People & Portraits, Messums Wiltshire, 26 May - 8 July 2018 [Exhibition catalogue]. Tisbury: Messums Wiltshire]

Interest in Henry Lamb’s oeuvre has increased in recent years, and he has been the subject of recent exhibitions at Salisbury Museum and Poole Museum. His work is included in major collections including Tate, the National Portrait Gallery an the Imperial War Museum.