A Master of Form and Colour

The most independent of the four ‘Scottish Colourists’, George Leslie Hunter's still lifes 'show a mastery of form and colour that takes one back to the triumphs of the Dutchmen’ (Anon critic, Bailie, 1916). We were delighted to present Still Life of Apples and Tankard and The Blue Tablecloth (Still Life with Tasselled Fan), fine examples of Hunter’s work from the first phase of his career as an artist of distinction and recognition, in our June 2022 Scottish Paintings & Sculpture sale.

George Leslie Hunter was the most independent of the four ‘Scottish Colourists’, who also included F. C. B. Cadell, J. D. Fergusson and S. J. Peploe. He was born in Rothesay on the Isle of Bute and emigrated to California in 1892. He was self-taught and began his career in San Francisco, earning his living as an illustrator whilst establishing himself within the Californian art world. Much of his early work was destroyed in the region’s earthquake of 1906, shortly before its inclusion in what would have been his first solo exhibition.

Later that year Hunter moved to Glasgow, where his mother and other relatives had settled. The city was to remain the base from which a peripatetic lifestyle was led, until his death there in 1931. Whilst his exact movements are impossible to establish, it is known that he spent time in London and Paris, for example, before World War One.

Still Life of Apples and Tankard and The Blue Tablecloth (Still Life with Tasselled Fan) are fine examples of Hunter’s work from the first phase of his career as an artist of distinction and recognition. European travels provided access to a catholic range of art in public and private galleries, in addition to what he saw in America. His biographer T. J. Honeyman cites ‘very indifferent reproductions’ in an early scrapbook, from which ‘one can surmise the line of his approach and make a fair guess that his heroes, Chardin and Manet competed with the Dutch in his early essays in still-life painting.’ (T. J. Honeyman, Introducing Leslie Hunter, Faber and Faber, London, 1937, pp.56-57). 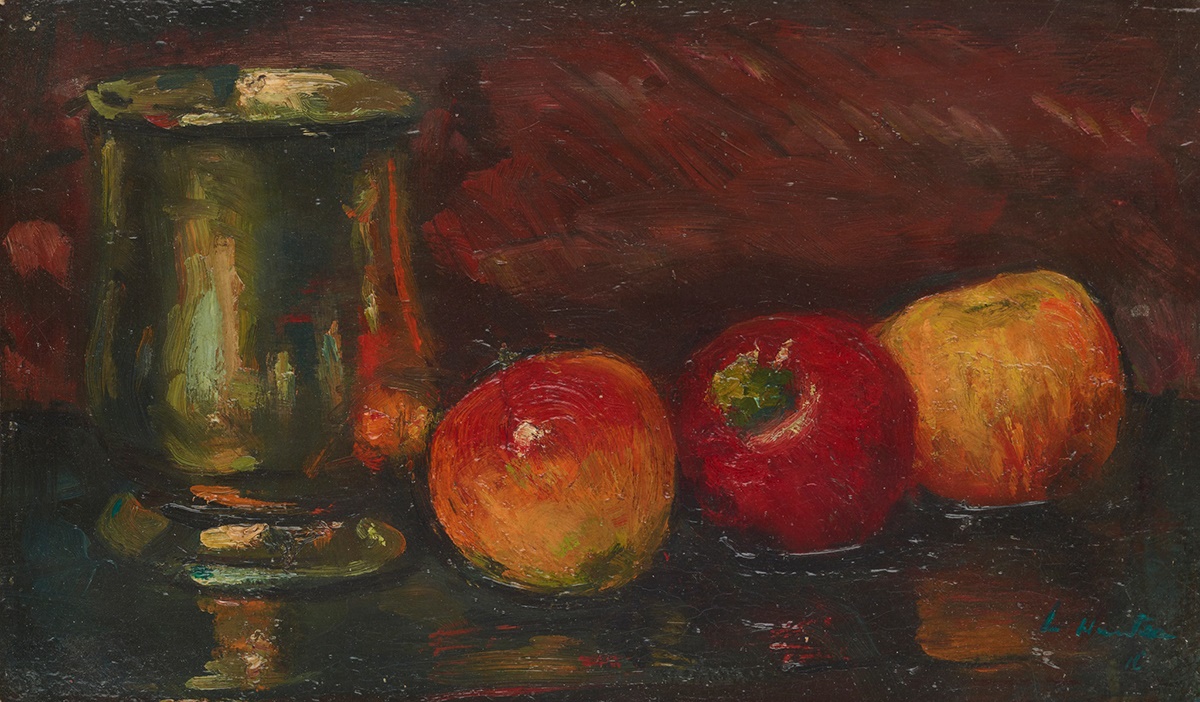 Moreover, Hunter would have been familiar with the collections of Glasgow’s Art Gallery and University; the former’s two paintings by the Dutch artist Willem Kalf (1619-93) and the latter’s three works by the French painter Jean-Baptiste Chardin (1699-1779) have been singled out as sources of pre-war inspiration by Bill Smith and Jill Marriner (see Bill Smith and Jill Marriner, Hunter Revisited: The Life and Art of Leslie Hunter, Atelier Books, Edinburgh, 2012, pp.54-55).

At some point after 1910, Hunter was introduced to the Glasgow-based dealer, Alexander Reid. This proved to be a turning-point in Hunter’s professional progress and was followed by his first solo exhibition, held in Reid’s gallery, La Société des Beaux-Arts, in 1913. 17 works were sold and the art critic of the Glasgow Herald described Hunter as ‘a vigorous and confident painter with a fine sense of colour’ (as quoted by Smith and Marriner, op.cit., p. 54).

Still Life of Apples and Tankard is a dignified still life in which Hunter reveals an assured use of oil paint and colour to realise light and shade, form and reflection. Whilst paying homage to past masters, bravura touches such as the brushstrokes of cream and red in the tankard’s stem reveal a confidence which matches the accomplishment of the image as a whole.

The somewhat later The Blue Tablecloth (Still Life with Tasselled Fan) is a highly sophisticated painting. Hunter contrasts light and dark, uses bright colour to provide structure and rhythm and leads the viewer’s eye right to the surface of the canvas by way of the fan’s tassel, which dangles alongside the napkin over the table. A richness of paint application can be seen throughout, whilst passages such as the severely fore-shortened glass and the rendering of the flower heads show why Hunter’s work of the period immediately found favour with collectors.