In advance of the Scottish Paintings & Sculpture auction on Wednesday 14 June, Head of Paintings Nick Curnow takes a closer look at some of the top lots of the sale.

'His most important picture this year, at once larger and more complex than any he had yet attempted'

The Past and the Present has a clear poetic theme, the passage of time, and the indifference of youth to history, age and death. This notion is romantically revealed in the subject, the group of children building new structures over the top of old, deteriorating gravestones, overlooked by an elderly gentleman, and emphasised in the approach, with the children illuminated in strong sunlight and the old man almost hidden in the shadows. The youth are concerned with the present, and building plans for the future, with no thought to the history of this land or materials, and the fact that they too will one day age and die. This sentimental evocation was McTaggart's intention from his very early sketches for the picture, although the emotive title came later, in the suggestion of an early patron, and the later purchaser of the picture, Robert Craig.

By the time he was working on this painting, McTaggart had sought out the inspiration of the Pre-Raphaelites, having made the effort to see Holman Hunt's and Millais's work in Manchester and Edinburgh. As a response to these paintings, McTaggart began to work differently, utilising intense colour and carefully worked textures in his paintings, and depicting scenes that had a poetic or symbolic implication, as here.

This change is clear in The Past and the Present, and as Dr. Lindsay Errington illustrates, the title has a poetic symbolism in terms of its place in McTaggart's development, and the wider developments of Scottish painting: 'the delicate tonal interrelations, cast shadows and reflected lights - are now brought out of the studio and into the strong summer light, and translated into bright colours. Only the areas of shadow, in the flesh, and on the darkened north wall of the church, are still treated with the transparent brown, traditional to Scottish art. In terms of its technique, his picture is indeed The Past and The Present.'

This was a temporary approach for McTaggart occurring at this specific point in his career, as by the 1860s he was developing the impressionistic style that is now instantly recognisable as his.

Sir James Guthrie was perhaps the most accomplished of all the Glasgow Boys in his use of pastel, and the works which he produced in the medium can mostly be said to divide into two periods.

Having experimented with pastel early on in his career, Guthrie returned to it in 1888, taking his subjects from the village of Cambuskenneth near Stirling, where the Boys spent the summers of 1887-1890. In these Cambuskenneth pictures, apart from landscapes, Guthrie produced charming images of the old town and the ferry crossing along with several pictures of women at work in a rope factory, which demonstrate a greater chiaroscuro than had previously been seen in his work in the medium. Apparently pleased with the results, Guthrie showed some of these works at both the Glasgow Institute and the R.S.A. in late 1889 and early 1890.

Taking up pastel again in 1890, Guthrie began to draw scenes at Helensburgh and on the Firth of Clyde and that same year was invited to join a society of pastelists in London. Caw points out (Sir James Guthrie, 1932) how Guthrie's pastels of this period had an effect upon his subsequent work and also the fact that there is a profound difference between the works of 1888 and 1890.

The Helensburgh series, produced in 1890, to which group the painting offered here belongs, was, says Caw, although equally 'direct in handling' as the earlier works, somehow more abstract. As subjects he chose landscapes, farming scenes and images of workers on the shore and also on the newly constructed West Highland Railway. These enormously accomplished outdoor scenes and images of everyday life, in particular tennis parties, were complemented by a series of a dozen or so figure pieces depicting interiors, 'mostly studies of girlish beauty.' The Window Seat depicted a girl sewing and Tea a young lady in a large black hat with a cup in her hand beside a tea table. Other titles included Causerie, The Fan and Jenny and Caw opined that on the strength of these drawings, 'pastel assumed in his [Guthrie's] hands a beauty and charm of a kind which differentiates the results he attained in it from those of others, whether belonging to the past or amongst his own contemporaries.'

After five months, according to Caw, Guthrie had produced enough drawings to send to show at the Dowdeswell Gallery in London. Uncatalogued, the exhibition comprised some fifty pastels, which, although well received by the major London critics, singularly failed to sell. The following year however, when shown in Lawrie's Gallery in Glasgow's St Vincent Street, Guthrie's pastels sold out. A catalogue was at last produced but even when Caw was writing his biography in the early 1930s, this proved impossible to find and today remains a rarity.

Sadly, the sell out Glasgow show marked the end of Guthrie's foray into pastels. It is possible to speculate on the reasons for this, but quite possibly it was only due to the recent fallow period in his career as a commissioned portraitist in oils being replaced by a time from 1891, during which his order book was always full. As such they can, in their captivating and inventive use of a notoriously difficult medium, be said to mark the highpoint of Guthrie's career as a ground-breaking artist, before he settled down to the life of a hugely successful portrait painter. 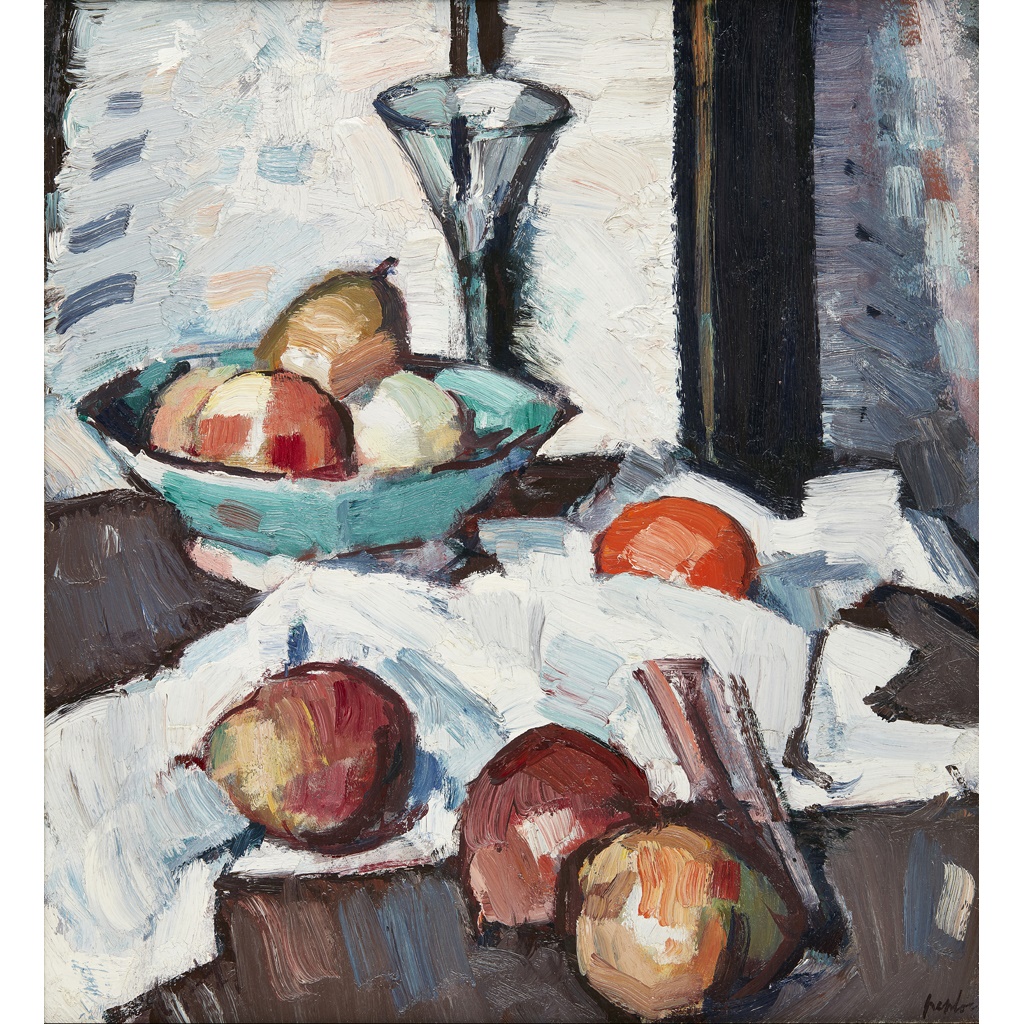 This subtly tonal still life is typical of Peploe's work of the late 1920s and early 1930s. By this time he had left behind the vivid primaries of his earlier paintings of the late war years and early 1920s and adopted an altogether more muted palette.

Hailed in 1926 by the Scotsman as a 'Scottish Cezanne', Peploe shows himself in this picture and others known to have been painted during this period, to have mastered a rare harmony of colour and form. Clearly he recognised his profound debt to the French painter, always keeping a copy of one of Cezanne's works pinned to the wall of his studio, which at this time was at 54 Shandwick Place in Edinburgh. Peploe had moved here in 1917, during the war and would remain here until 1934 and his move to nearby Castle Street. Perhaps Peploe's most obviously Cezanne-esque still life is that now in Aberdeen Art Gallery, dated to 1930, in which the brushwork is less apparent than in the picture shown here and the forms altogether more clearly defined.

The work on offer here builds on that experience and bears more of a resemblance in handling to another still life in the collection of Kirkcaldy Art Gallery, dated to 1931 and it may be from a similar date. It was an important year for the Colourists, for it was in 1931 that the four painters showed together for the second time in a Paris group exhibition, Les Peintres Eccossais, at the Galerie Georges Petit, along with Telfer Bear and Dunlop. With an introduction by the British Prime Minister, Ramsay Macdonald, the show contained ten works by Peploe, including still lifes with roses and fruit, and views of Iona. From this group Peploe sold a landscape, Le Foret, a view of Cassis, to the French government and on his return to Scotland held a successful solo show at Reid and Lefevre in Glasgow.

It is interesting to note that another still life, on long loan to Birmingham Museums, includes the same wine glass shown in the current picture and is largely painted with the same palette. While this has been dated to 1927-1929, it may well be slightly later, given its similarity. More importantly, when establishing dates, the Kirkcaldy picture is united with the current painting by the bold facets used on the fruit, the brushwork of the highlights on the apples and the use of broad strokes of brown and violet in the areas of darkest shade. All three works possess a delicacy of touch and a sensitivity which emphasises the fragility and mutability of their subject matter in a way which perfectly echoes the underlying principles of Peploe's prevailing French inspiration.

The paintings produced by S.J. Peploe and F.C.B. Cadell over twenty years from 1912 to 1933 on the tiny Scottish island of Iona are among the finest of their oeuvres. Both artists were much taken by the unique character of the island, which had been attracting artists for many years, including John Duncan and James Paterson.

With its often bright green water and pale white sands Iona offered the perfect landscape location in the bright Hebridean summers for artists such as the two Colourists, whose palettes naturally reflected the hues of warmer climes. The two artists would paint views from the island across to Staffa and Mull and on the island itself the nunnery and abbey along with farms and crofts; the island offered a plentiful supply of subjects. While Cadell had visited the island to paint before the Great War it was only in 1920 that Peploe accompanied him for the first time.

While Peploe painted almost exclusively in the north of the island, Cadell tended to experiment with location. Distant features of his paintings include the Dutchman's Cap, Lunga and Rhum in the north and in the south images of the shoreline including the Marble Quarry and views of and from the south of the island. From the extreme south he would have seen the tidal island of Erraid, famous from the works of R.L. Stevenson, situated just off the Ross of Mull.

It seems possible that this view was painted either while on an excursion to Erraid or from a vantage point on the south east coast of Iona itself, perhaps close to the Marble Quarry. The painting bears similarities, not least of composition and viewpoint, to one other known painting by Cadell of the Paps of Jura from this direction, Traigh Geal, Erraid, painted circa 1925 (private collection).