Fine Art & State of the Art

Benjamin Lewis Vulliamy (1780-1854), third generation of the renowned 18th and 19th century Vulliamy clock-making family, was Clockmaker of the Crown and elected Master of the Worshipful Company of Clockmakers five times, more than any other member. He studied horology from an early age, eventually taking over the family business in 1811 from his father Benjamin. In addition to being a skilled craftsman, Vulliamy was known for his refined taste and extensive knowledge of art, literature, and architecture. 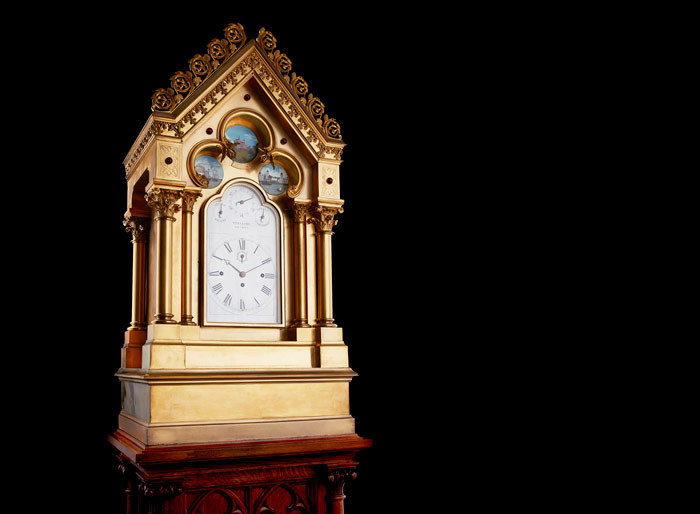 This monumental clock, with its imposing case in the Gothic taste, represents the very best work produced by the Vulliamy workshop during the 1840s. Undoubtedly a special commission, the scale of the clock, and the quality of the workmanship, indicate it was intended for an important client and location. The Gothic influences incorporated in the case, with its architectural form, details, and embellishments, is characteristic of Gothic Revival design, expounded by Auguste Pugin and his son Augustus Welby Pugin, architect and designer of the interiors of the new Palace of Westminster.

The clock’s history is unfortunately unclear. The movement, though clearly signed Vulliamy, is not numbered, an omission that makes dating the piece difficult. The Vulliamy Archive, at the British Horological Institute, contains incomplete records from the firm, and offers few insights into the potential original owner. Some tantalising clues can be taken from the three painted roundels depicting landmarks in Greenwich, which could indicate a private commission with links to the Royal Hospital, or a governmental commission, as Vulliamy supplied an increasing number of public funded works in the 1840s and 50s.

By repute, the clock was removed from a private house in Greenwich for safekeeping in 1939, eventually finding its way into the possession of a judge whose family referred to it as the ‘Pugin Clock’, more a statement on its design than on any substantive connection with Pugin. It then passed into another private collection where it has remained for the past fifteen years.