From a Private English Collection

Our November 2022 auction of Fine Asian & Islamic Works of Art featured a fine selection of woodblock prints including a Rare Group of Four by Ding Liangxian (Active 1735-1750) and Two Prints from the Mustard Seed Garden Painting Manual from a Private English Collection.

The political stability and economic prosperity in the Ming Dynasty (1368–1644) brought wealth, literacy, and social mobility to China's burgeoning urban population. Cities such as Nanjing and Suzhou became centres for the educated elite and wealthy merchants who fostered an avid consumption of culturally sophisticated goods, including finely printed material. In the early seventeenth century, the technique for high-quality printing in graded colours had been perfected. Some often without the use of ink outlines, enabled printers to create images that closely resembled paintings executed with a brush. This quest for technical refinement significantly impacted and inspired the development of colour printing in Japan. 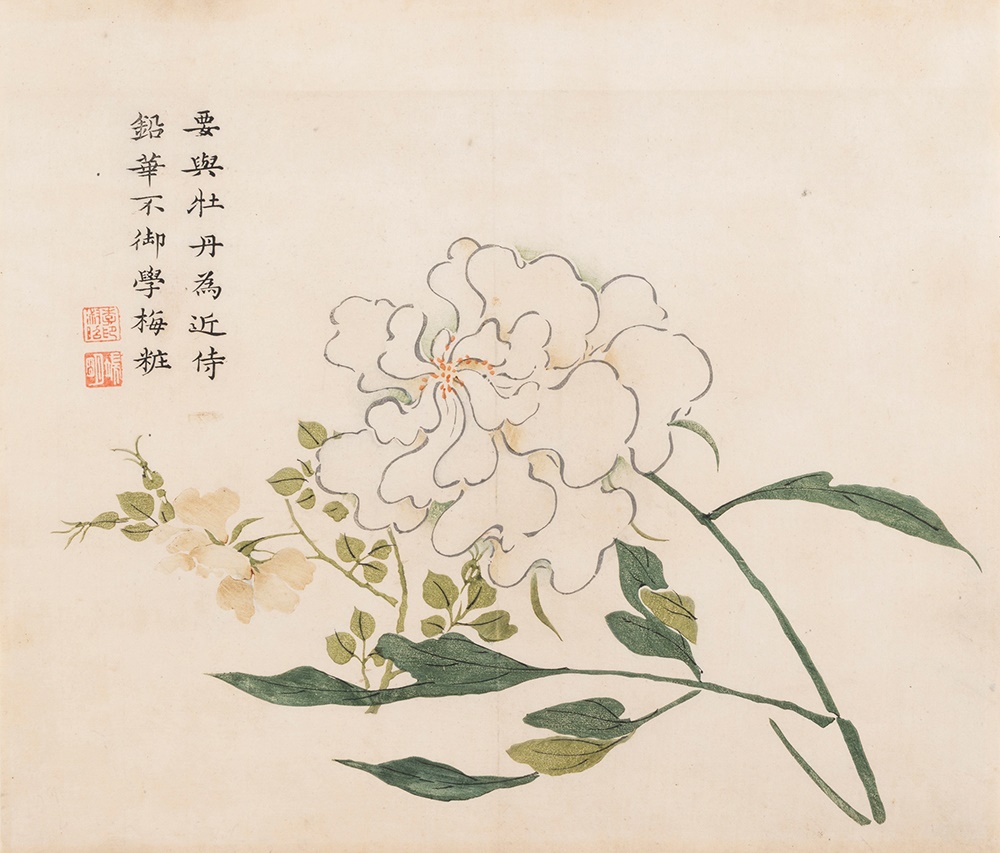 The two prints presented in Lot 49 in our sale are leaves from The Mustard Seed Garden Painting Manual, first compiled by Wang Gai, and published in 1679AD. The manual aimed to showcase the ‘scholarly’ painting to the townsmen of Jiangsu, Nanjing. This work is recognised by many scholars as a preeminent painting handbook. Due to its success and popularity among the literati, The Mustard Seed Garden Painting Manual has been reprinted in China, Japan and Korea. Not only were classical painting compositions translated into the print medium, but contemporary artists also contributed painterly designs that served as both inspiring models and actual painting manuals. 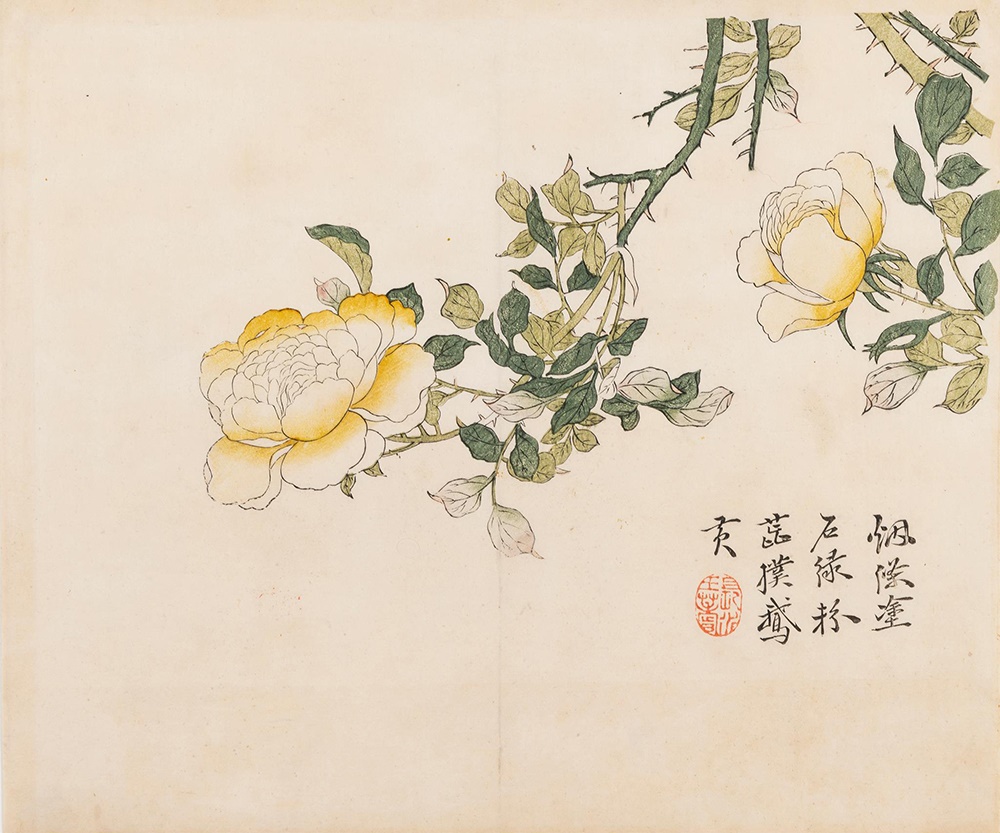 Both two prints in this lot depict peonies, the images are complemented with poems in fine calligraphy and with seals by the artist who designed them. The print with two seals is from the fourth volume of the manual. 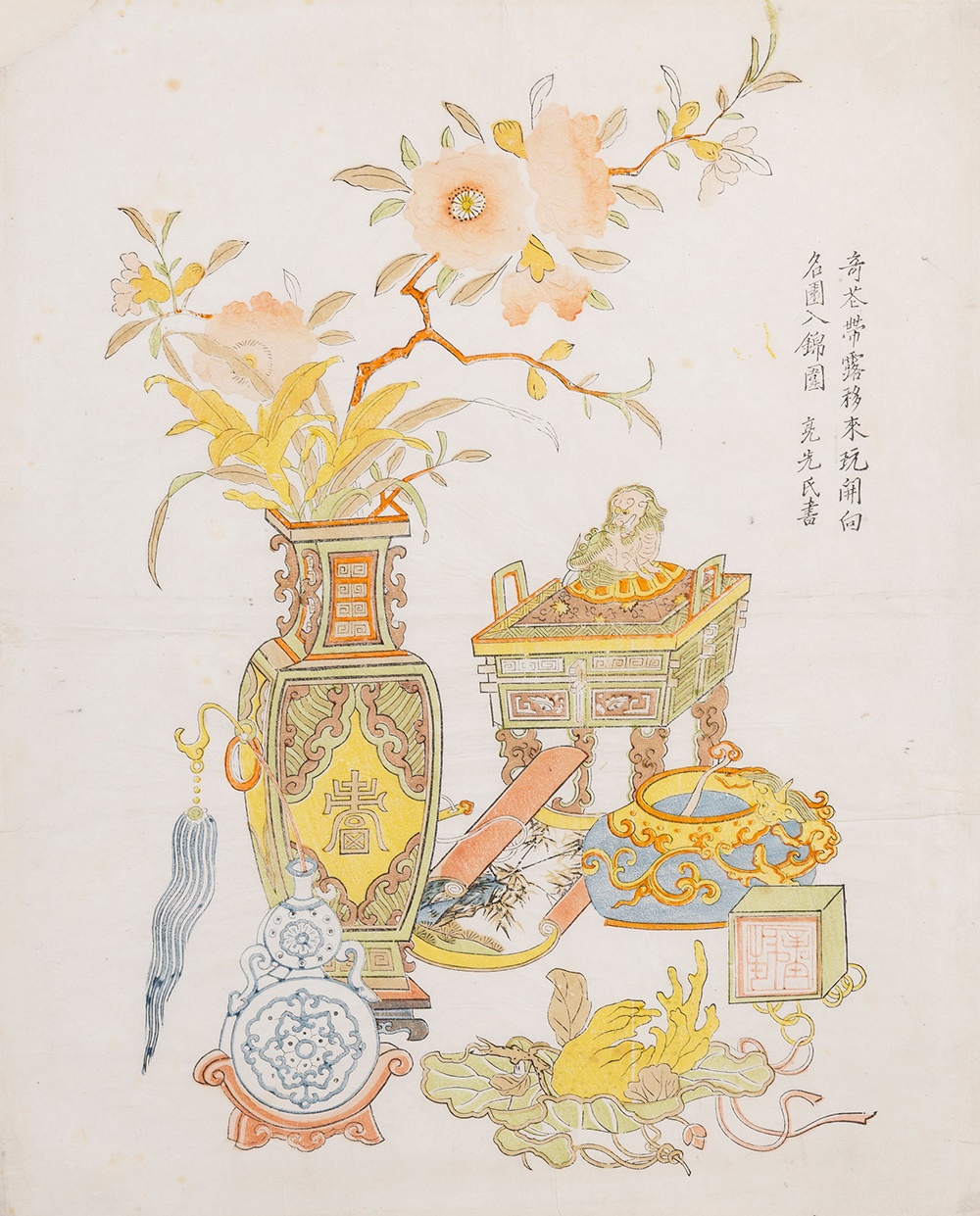 Lot 48, a group of four rare woodblock prints that featured in our Fine Asian & Islamic Works of Art auction from the same collection similarly date to the 18th Century, Qing Dynasty. The name Ding Liangxian appears on a number of prints from Suzhou, Jinchang district. It refers either to a print workshop or the ingenious artist himself. They specialised in subject matters such as flowers, fruits and birds. Although rarely available, the prints presented in this lot can be compared to highly similar examples in the collection of the British Museum.

The last print in this lot depicts the first three months of the ballad Song of the Twelve Months in the Tune of the Tea Picker’s Song. It consists of three scenes from top to bottom, featuring ballads for January, February, and March according to the Chinese lunar calendar. Compare to a related example depicting ballads for October, November and December, see British Museum no. 1991,1015,0.1. According to the curator's comments, which potentially could apply to the print in this lot, 'this print incorporates scenes from three popular dramas, turning each of them into a ballad. By illustrating and combining popular folk songs with scenes of dramas of the time, Ding Liangxian created a new type of woodblock print for urban audiences.'

Also from the same private English collection in our November 2022 auction is Lot 278, three prints from the series One Hundred Famous Views of Edo (Meisho Edo hyakkei)by Utagawa Hiroshige (1797-1858).