Join Senior Specialist, Alice Strang, as she discusses Wilhelmina Barns-Graham’s diaries of 1940 to 1941.

The diaries delve into her arrival in St Ives, the origins of her friendship with Barbara Hepworth and the beautiful drawing that achieved a world record in our white glove sale of The Wilhelmina Barns-Graham Collection in October 2021.

Wilhelmina Barns-Graham’s transport us to the moment she arrived in St Ives from Edinburgh, aged twenty-seven and began her journey to becoming a pioneer of British abstraction.1 Amongst the first artists she met in Cornwall was Barbara Hepworth, who had established a reputation as a leading Modernist in London before World War Two. Barns-Graham’s recording of the milieu within which she found herself reveals the origins of a friendship which was to lead Hepworth to give her beautiful drawing, Figure and Mirror of 1948, to Barns-Graham as a wedding present in 1949.

Barns-Graham’s arrival in Cornwall was inauspicious. She described an ‘awful journey…through dull country…Pouring rain, and east wind.’2 The first words she heard were ‘The stars were too near the moon last night’ uttered by a station porter as a poetic bad weather forecast. Barns-Graham declared: ‘First impression of St Ives was disappointed.’

However, within days of her arrival, Barns-Graham’s Edinburgh College of Art contemporary, Margaret Mellis, invited her stay with her and her husband Adrian Stokes in their house, Little Park Owles, in nearby Carbis Bay. This led to Barns-Graham’s first encounter with Hepworth, which she noted thus:

…The evening before staying I went up to see them. I met Barbara Hepworth. Margaret wore navy trousers and jacket, brown suede sandals. Barbara the same but for a blue silk handkerchief tied round her head, her pale face – sharp nose and small lipsticked mouth and narrow brown eyes. Noticed her movements were quick and neat, her voice clipped and quiet. A Capable organiser I’m told. She sat on the floor.

Two days later Hepworth returned in the evening when the ‘wireless news bulletin’ was discussed. At this point Barns-Graham noted that the sculptor and her husband Ben Nicholson ‘are staying in a cottage nearby with maid and the triplets’, meaning Simon, Rachel and Sarah Hepworth-Nicholson, who were born in 1934.

Earlier that day, Barns-Graham had met the Constructivist Naum Gabo and his wife Miriam Israels for the first time. They had followed on Hepworth and Nicholson’s heels from London to Cornwall in 1939 and were ‘very near too in [a] bungalow with the awful name of Faerystone! Miriam…has lovely grey eyes but glasses…Easy and friendly…She lent us all a tough American book to read. Shocked Barbara. ‘The Postman Always Rings Twice’ by [James M Cain, published 1934].’

Barns-Graham’s social circle began to expand, including to those with shared links to Edinburgh. On Easter Monday [25 March] 1940 she noted that:

Adrian and Margaret gave a delightful sherry party at Little Park Owles – in their studio. The guest of honour was Herbert Reid [sic]. He was brought by Barbara and Ben Nicholson with whom he was feeding and staying at the nearby guest house. They also brought Mr and Mrs John Summerson – a delightful pair. Mrs Summerson is Barbara Hepworth’s sister and is a ballet dancer…John…used to be on the staff, Architecture, Edinburgh College of Art in 1932 [sic] and now writes architectural reviews, I think.

Barns-Graham had attended at least one of Herbert Read’s lectures during his tenure as Watson Gordon Professor of Fine Art at the University of Edinburgh between 1931 and 1933, whilst Summerson taught at her alma mater for the academic year of 1929-30, the year before Barns-Graham enrolled there.

Other guests at the gathering included the anatomist and political advisor Solly Zuckerman and his wife Joan Rufus Isaacs, as well as the scientist Desmond Bernal and the anti-war campaigner and arts patron Margaret Gardiner. With her artist’s eye, Barns-Graham reflected on this esteemed company:

Margaret and I in background.

Barns-Graham was invited to a musical evening for the same group given by Mellis and Stokes soon afterwards. She happily recorded:

I spent the afternoon at Little Park Owles…Herbert Reid [sic] was going to look at Margaret and Adrian’s pictures and they were busy preparing for a show – meanwhile various people arrived and Ben Nicholson, Solly Zuckerman, [and] Naum Gabo wanted to play croquet with Herbert…Gabo and I sat and waited - and [I] tried to describe to Gabo the game of cricket! I walked with Margaret on the beach - helped to make her tea, and returned for concert evening at 8.30…It was an enjoyable evening.

As March 1940 drew to a close, Barns-Graham listed the 230 people she had met that month. The first was ‘Mrs Woodhead’, the proprietor of the Treloyhan Hotel where Barns-Graham spent her first weekend in St Ives. Hepworth is seventh on the list and is described as ‘sculptress’, whilst Nicholson is no. 10 as ‘Artist Constructivist’, followed by their triplets at no. 11.

Barns-Graham began to explore her new surroundings, visiting places including Mousehole and Newlyn. She drew, painted and established herself at No.3 Porthmeor Studios in St Ives, two miles south of Carbis Bay. She also learnt more about the artistic community at large and its intricacies. Of the painter Joan Manning-Sanders and her husband Roderick Pierre Floyd, who were also based in St Ives, she noted in April 1940: ‘Both know the Stokes, Nicholsons and Gabos, but expressed the opinion of intellectual snobbery up there, but liked their work except Gabo’s.’

Amidst her concern about the progress of war, Barns-Graham’s social life continued and she recorded a circus visit in May 1940:

A little circus came to St Ives on the Island. It was a strange sight to see two grey elephants sauntering in the dusty heat. Just the colour of grey socks. A party of us went. Margaret Stokes, Barbara Hepworth, triplets who took everything so so seriously – a boy from her first marriage – Ben Nicholson, the Gabo’s, Mr and Mrs George Buchanan. Perfect surroundings. Real grass and a large green and white striped tent, and those hundreds of pink faces of children.

Hepworth’s son, Paul, from her marriage to the sculptor John Skeaping, was by then ten years old. Barns-Graham became particularly friendly with the writer George Buchanan and his wife Mary, with whom she temporarily shared a flat from 25 May whilst George was working in London. 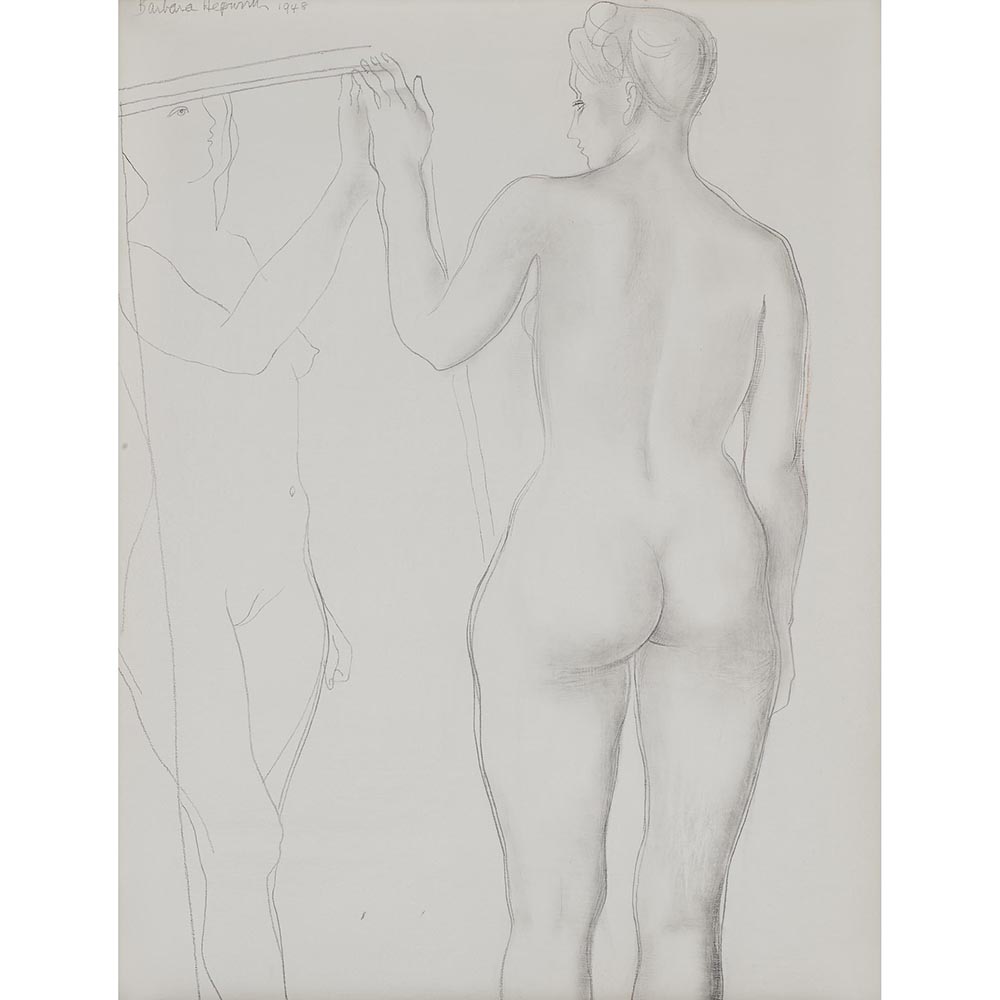 Barns-Graham’s understanding of Hepworth as an artist developed, as did their social contact. Soon after the circus visit, she recorded: ‘Miriam Gabo asked me to tea…Lovely fresh lobster and lettuce and white wine. We went…on to the Stokes to dance. Beautiful light that evening and the little black, blue boats lovely…We had some fun dancing – Gabo went home to work and Ben refused – but Barbara H came.’ The next day she recalled: ‘Miriam on looking at Picasso abstracts said ‘They (meaning Gabo, Ben Nicholson and Hepworth) are against that kind of abstraction in so far as it needs to be explained.’’

Over time, Barns-Graham established herself further personally and professionally in St Ives. The next reference to Hepworth in her diary is not until 15 October 1941 and the stark statement: ‘Ran into Barbara Hepworth one evening. Looked tired. Got no domestic help just now.’ Indeed, Hepworth herself was later to recall the challenges she faced during the war, raising four children and attempting to main her practice at the same time.

Towards the end of her 1941 diary, Barns-Graham compiled an alphabetical list of ‘Artists studied: with works and notes’. It includes Nicholson, but not Hepworth. This does not seem to have affected the women’s friendship, as witnessed by Hepworth’s presentation of her pencil and gesso on board drawing, Figure and Mirror of 1948, to Barns-Graham on her marriage to the architect and urban designer David Lewis the following year. It is a beautiful work. A finely rendered three-quarter length standing female nude is viewed from behind, her curvaceous figure realised with the subtlety of a sculptor’s draughtsmanship. The subject is shown touching her reflection in a mirror to the left, in which she can be seen from the front in more lightly realised form. The work is a testimony to one of the first friendships which Barns-Graham made on arrival in Cornwall and also to one of her female peers within the celebrated St Ives School. Barns-Graham was to keep Hepworth’s Figure and Mirror for the rest of her life.3

Barbara Hepworth’s Figure and Mirror 1948 was sold as part of The Wilhelmina Barns-Graham Collection, a white glove sale by Lyon & Turnbull, on 28 October 2021 where it achieved a world record for the artist at £471,000 incl premium.

This article is indebted to the research of Lynne Green and Janet Axten.

1 The diaries are in the archive of the Wilhelmina Barns-Graham Trust, see https://www.barns-grahamtrust.org.uk/ [accessed 9 October 2021].

2 All quotations are from Barns-Graham’s diaries of 1940-41. Her idiosyncrasies of spelling, grammar and so on have been maintained.

3 Figure and Mirror is to be sold as part of The Wilhelmina Barns-Graham Collection by Lyon & Turnbull on 28 October 2021, see Lot 28 [accessed 9 October 2021]. Around 1949 Barns-Graham acquired Hepworth’s Sculpture with Colour (Deep Blue and Red) of 1940 from Mary Buchanan, which is now in the Tate collection, see https://www.tate.org.uk/art/artworks/hepworth-sculpture-with-colour-deep-blue-and-red-t03133 [accessed 9 October 1941].

The Wilhelmina Barns-Graham Collection was shown alongside our Autumn 2021 edition of the bi-annual MODERN MADE auction at The Mall Galleries in London.