A Discussion with John Brazenall

Scottish sculptor and painter John Brazenall joins specialist Charlotte Riordan to share his recollections of working with painter, sculptor and film-maker Julian Schnabel in New York during the early 1980s.

How did your relationship with Schnabel come about?

It was around 1983/4 and I was working at the Johnson Atelier in New Jersey. Julian was one of our big contracts and I was in charge, initially, of the metalwork/fabrication of the pieces, the assembling and making the works ‘read’ as a whole. I was able to complete tasks like this at speed, which was popular with artists and their galleries and backers, and of course my company because it saved them money. I was known there as ‘The Flying Scotsman’ as a result!

Can you tell me a little about what you understand to be Schnabel’s aims for his sculptural works of this period?

At this point, Julian was beginning to “come off the canvas” a little bit. Moving towards sculpture was a logical extension of his plate paintings. There was a two year build up to the big Pace Gallery show. I recall $4,000,000 had been put up in casting fees by his backers. 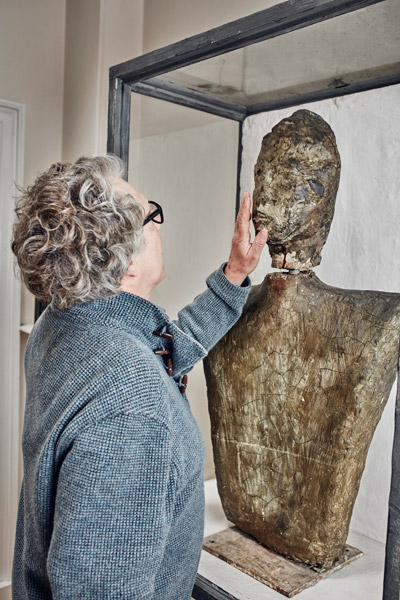 What did Schnabel’s process involve?

Julian really liked coming down to the foundry and observing our end of the process. He was only a young guy then but already a big star and I think he enjoyed the waves parting for him when he came down to see us all in the foundries! Money was no object and he was playful and had great energy. He had what I’d call a ‘magpie lust’ and was really developing his visual vocabulary; finding objects in junk shops and imagining them scaled up. Julian was an avid reader of philosophy, classics, poetry; a very erudite guy, even though he tried to hide it!

To work together successfully you presumably have to have compatible artistic sensibilities. What do you, as fabricator and fellow artist, feel you brought to the process?

I like to think of the first time I ‘finished’ a work of his as an act of controlled vandalism – which fortunately he really liked! He wanted to find out who the gnome behind the scenes was, finishing his work in a way he liked so much. We got to know each other and became friendly. I helped him find a more painterly vocabulary in his sculpture. He’d let me have free rein to patinate his work, as my own approach and work resonated with his. The drip effect married his paintings and sculptural work, and I knew how to find and make the right kind of mark that would have this effect. It elevated the objects, making them look like found or discovered artefacts. It suited what Julian was trying to articulate in his sculpture. This was in the air at the time – I found parallels of my own work in the ‘New Primitivism’ of German artists like Georg Baselitz and Anselm Keifer.

Do you find the relationship between artist and fabricator an easy one, or inherently challenging?

No, it really wasn’t challenging in this case. He gave me a lot of artistic freedom to finish his work, which in turn afforded him the luxury of not having to be present in the foundry all the time. I kind of view myself as a “surrogate parent” of the work. I had to be satisfied with how it looked, was cast, patinated. It had to look alive and I didn’t like it to show too much process. This was a shared ideal and why our relationship worked so well.
The way I looked at it, Julian was the composer and conductor of the orchestra, and I was a solo-ist who was brought in to make my unique contribution, which helped make up the work as a whole.

As an artist yourself, do you feel that your time with Schnabel influenced your work in any way?

Oh yes. Seeing the way Julian edited things; it was almost like he had a template – did an addition give a work more power or diminish it? And he liked my work; he thought I was a good painter. Working on his sculptures allowed me to explore this side of my practise and directly pushed it forward. He allowed me to step into his world.
We were developing in tandem really – me as a painter and him as a sculptor. Perhaps that’s why the relationship worked so well and the work was so satisfactory. I saw that time as collaborative in the truest sense of the word though, knowing him, I’m sure he would never use that word!

The works here are among the only examples on which Schnabel worked directly by hand. What can you tell us about the specific meaning behind these pieces?

I would say that this work depicts his first wife, Jacqueline Beaurang. He was signing the initials ‘JB’ on a number of sculptures and paintings from this period. Being so well versed in ancient history and classical art and so on, I think the notion of making a bust of someone important in his life was a logical thing to do. That’s certainly what I see in it – something more Cycladic. It’s not neo-classical, it’s more primitive.

This might be controversial to say but I also think there was a gentle touching on or examination of misogynistic thoughts involved in some of his motifs – the detachable, ‘decapitated’ nature of the figure’s head in this particular work, the blanked out eyes in his Blind Girl Surf Club series (which incidentally probably relates to a very emotional, angry, drawing I made during my divorce around the same time. He liked it so much he kept hold of it.)

How was the exhibition at Pace Gallery, NYC received at the time?

Well! He had a bit of a nemesis in the journalist Roberta Smith at the time, but even she gave it a fairly rave review. She particularly enjoyed the sculptures’ “painterly passages” which, as you can imagine, was nice for me to hear! Each work was cast six times and I believe most if not all sold. He was big news.

The majority of his sculptural works remain tucked away in private hands and are scarce to market. What do you think marks these maquettes out as being of special interest to collectors?

Well that’s easy – they are totally unique. They’re as unique as brushstrokes on a canvas. His finger marks are still there in the plasticine – and throughout the casting process they’ve been handled with sufficient skill as to retain the artist’s mark making. It’s rare too. He was a pragmatist about things being destroyed by way of achieving the fully cast product. I think he’d find these fascinating himself – survivors. And they’re just great objects; a great motif of his: the heroine; Jaqueline. As a motif this image manifested as a lot of things in his work.

Do you have an opinion on what it is about Schnabel’s work that makes him the success that he is?

He has an extraordinary touch – he is a wonderful draughtsman and painter. Under all the sensationalism! And few can work on the scale he can and retain the kind of fluency he does. He just has an all-round tremendous artistic sensibility and exquisite taste. In many ways he paved the way for the likes of Koons and Basquiat. Oh, and he throws a good party!

Date For Your Diary

Lyon & Turnbull will offer these rare maquettes by Julian Schnabel at our Contemporary & Post-War Art auction to be held on 17 August in Edinburgh.