The arrival of Admiral Perry with four warships into Tokyo Bay in 1853 set off a chain of events that had a significant impact on European decorative arts and design. After 220 years of self-imposed isolation, Japan was forced to establish trade deals with Western trade partners. ‘Japonisme’ was born.

Exhibitions of Japanese art and objects at the London International Exhibition in 1862, and the Paris Universal Exhibition in 1867 caused sensations and the Japanese style quickly became themode de jour. Western connoisseurs had an insatiable appetite for all manner of Japanese art, including ivory netsukes and okimono, bronzes figures, Imari porcelain and lacquer. The impact of Japanese woodblock prints was particularly important, and they were collected by all levels of society, in particular artists and designers. Expensive items like porcelain were often packed in prints from the ukiyo-eschool, and were shipped in large quantities to the West. They influenced the Impressionistand Post-Impressionist painters with new ways of composition and perspective which had a profound effect on their work in the late 19th century.

In France, this obsession with all things Japanese inspired designers and manufacturers of the decorative arts, who incorporated Japanese design elements into traditionally French designed objets d’art with gilt bronze mounts and porcelain. Likewise in Britain, designers like Christopher Dresser and E.W. Godwin turned their eye to a more restrained approach in what became known as the Aesthetic Movement.

Our March auction, Belle Époque, features a number of pieces that reveal the best of French Japonisme, comprising bronze works attributed to the designer Edouard Lievre (1828-1886). Lievre was somewhat of a polymath, being a painter, cabinet maker, designer and engraver. He attained commissions from important clients and his designs were realised by the silversmith Christofle, bronzier Barbedienne, and the ébéniste Paul Sormani. Attributed to Lievre within the auction are a gilt bronze oil lamp, and jardinière stand, revealing the influence of Japanese art on French design, from the ruyi sceptre feet of the lamp, to the bamboo-form frame of the stand. The sale also includes an impressive Japanese Imari porcelain clock garniture with French bronze mounts, and a pair of large French bronze figures of a Japanese man and woman. 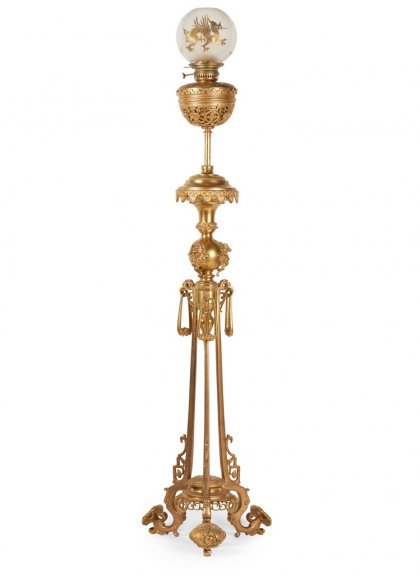