Initially trained as an architect, it was E.W. Godwin’s innovative furniture designs, grounded in principles of functionality and simplicity that defined his career.

Over a period of 25 years E.W. Godwin is thought to have produced around 400 eclectic designs, many executed in the Anglo-Japanese style which he is credited for popularising. This February, we are delighted to include several superb examples of Godwin's work in our 'Paul Reeves: An Eye for Design including Textiles as Art II' auction.

During the mid-nineteenth century, British taste was dominated by ornately decorated furniture which filled dark and heavy Victorian interiors. Looking to Japanese arts and crafts for inspiration, Godwin began to produce furniture which celebrated rectilinear forms devoid of ornament. Since he never had the opportunity to visit Japan himself, Godwin relied on imported goods such as Japanese prints, ceramics and furniture, of which he was an avid collector. His preference for elegant lines and undecorated surfaces resulted in lighter, sculptural forms, which looked forward to modern furniture design. Ebonised surfaces defined his Anglo-Japanese style, and Godwin regularly incorporated various floral and abstract motifs into furniture panels; a reference to Owen Jones’ Assyrian patterns from the Grammar of Ornament (Lot 83). Reducing decoration to series of turned spindles and ribbed grooves, a preference for light construction and utility dominates his work, adhering to principles of the Aesthetic Movement. This is illustrated by the addition of mirror inserts - a device used by Godwin lighten the appearance of his ebonised furniture (Lots 71, 82).

Though he is largely recognised for his Anglo-Japanese furniture, Godwin never tied himself to one particular style. As a result, many of his designs demonstrate an interest in Ancient Egypt and Greece, Gothic, Queen Anne and Jacobean furniture. His Anglo-Greece and Anglo-Egyptian Furniture designs are characterised by inlaid and geometric-turned decoration, angled supports and splayed legs, whilst retaining an elegant and functional aesthetic. Another distinguishing feature of his work is the use of solid, structured lines, akin to those seen in Japanese woodblock prints. However, many neglect the designer’s interest in Chinese decorative arts: his grid-like forms and interplay of solid and void spaces draw on the latticework is likely inspired by Chinese hardwood furniture of the Ming and Qing dynasties in particular. (Lots 75, 76)

A testament to his success as a designer, firms across the world replicated his work, including Cottier and Co. and the Bombay Art Furniture Company (Lot 70). Drawing from an extensive range of sources, Godwin successfully interpreted these to form his own distinctive styles, all of which are rooted in the desire to produce functional furniture for modern living.

This fine cabinet includes several of the design features which can be used to identify the work of E. W. Godwin. The sparseness of the design, to which his followers and imitators seldom managed to restrict themselves, is evident here and the interplay between horizontal and vertical planes echo his earlier designs in the Anglo-Japanese idiom.Japanese or Japonesque ‘leather paper’ is frequently used on his furniture, although its use is not exclusive to him. His preference for circular mirrors is again evident on this cabinet, as is the design for the finials and, of course, the trademark ring handles and backplates with keyhole piercings, taken from the antique. In ‘‘The Anglo-Japanese Buffet by E. W. Godwin, Variations on and Developments of a Design’ Decorative Art Society, Journal 18, 1994, Paul Reeves comments that he has only ever seen handles such as these on Godwin/ Watt pieces and dates this particular cabinet to the latter part of his career, circa 1880, following the publication of William Watt’s seminal ‘Art Furniture’ catalogue published by BT Batsford in 1877.

Winning the competition to build the new Northampton Town Hall at the age of twenty-nine established Godwin’s reputation as a leading civic architect. He followed this with another winning town hall design for Congleton, a small town near Manchester. These successes prompted his move to London in 1865, and in 1866 Godwin, with his partner Henry Crisp, entered the competition for the building of the new Bristol Assize Courts under the nom de plume ‘1066’ or ‘Ten Hundred and Sixty-Six’. Their designs won first, second and third prizes. Despite this, and amid protestations, a second competition was order by the town council, which Godwin again entered, this time only gaining second place to an entry from Popes & Binden, which was the one finally built. The collection on offer comprises a number of drawings from the first competition, including the original drawing.

LOT 76 | RARE PAIR OF AESTHETIC MOVEMENT EBONISED SIDE CHAIRS, CIRCA 1880

This chair appears in an illustration in William Watt’s ‘Art Furniture’ brochure under ‘Dining Room Furniture’. It is a variation of his lattice-back chair (Soros no. 137) however in this example Godwin has curved the back uprights and corresponding seat upholstery. The asymmetrical lattice back is derived from Japanese architectural details which Godwin used frequently in his designs. Only one other of these chairs is known with the configuration seen in the Watt catalogue (see Sotheby's London, 'Paul Reeves: Best of British The Auction', 20 March 2008, Lot 34).

Godwin designed a number of overmantels or chimney shelves for William Watt of which this is a variant. William Watt's 'Art Furniture' shows a similar mirror with this configuration of reeded and blocked ebonised convex mirror surrounded by carved sunflower bosses. 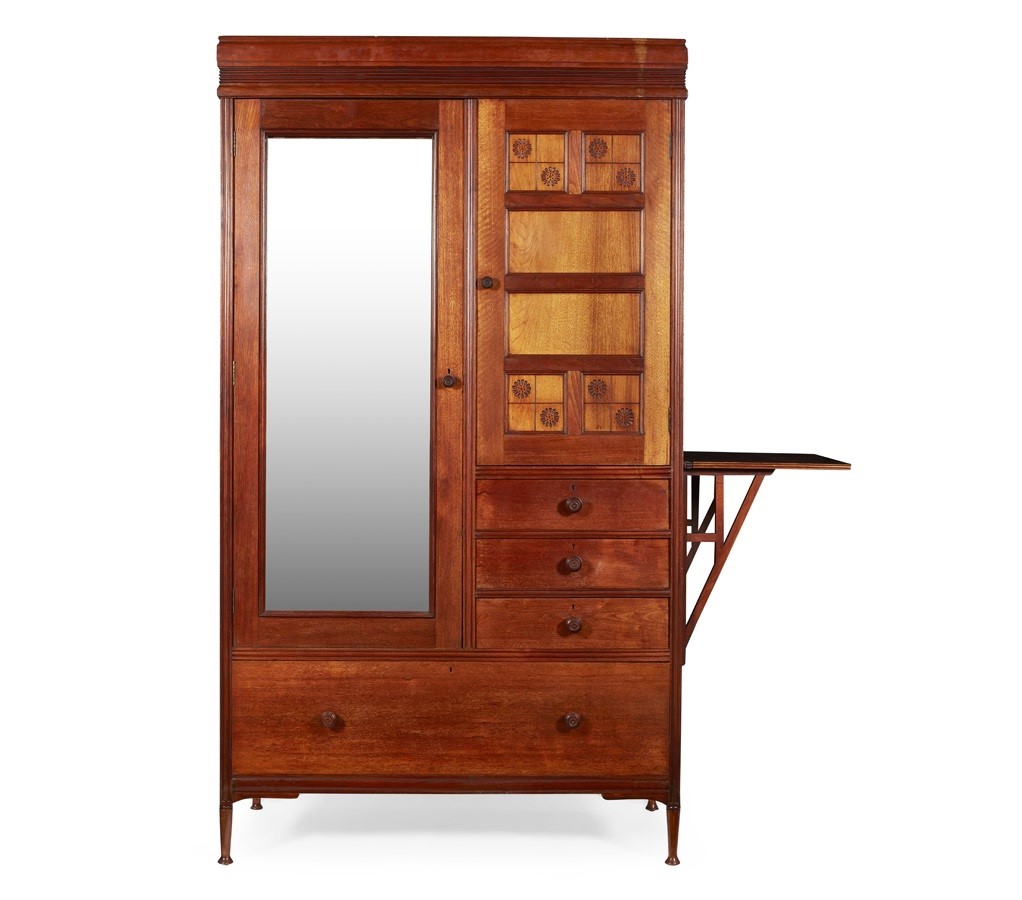 A similar wardrobe in deal is illustrated in William Watt, Art Furniture from ‘Designs by E.W. Godwin’, F. S. A., London, 1877, pl. 16. Priced at £18.18s0d., the wardrobe had minimal decoration and was described in the brochure as “usually enough (space) for a gentleman whose means were limited.” Presumably this is a more expensive version in walnut with single folding shelf and carved details, however the layout of the panelling, drawers and cupboards are identical to the example in the brochure.

AUCTION | Paul Reeves: An Eye for Design including Textiles as Art II