The visionary jewellery designers of the 1960s were fully engaging with the crystal form, often in subversive and playful ways. Their designs broke away from the traditional use of gem materials, contributing to the fresh ‘new look’ of British jewellery in the 1960s.

The visionary jewellery designers of the 1960s did for British jewellery what Christian Dior did for fashion in the previous decade. Dior’s designs flaunted full skirts of silks and luxurious fabric, challenging the austerity of post-war Paris, and ushering in a fresh style (his ‘New Look’). In post-war Britain, the door of creativity was firmly shut to the jewellery industry. Graham Hughes’ ground breaking ‘International Exhibition of Modern Jewellery’ cracked open that door, allowing designers like Andrew Grima, John Donald and Gilian Packard to burst through with floods of flexibility and ingenuity, specifically in their use of materials and working techniques.

A GOLD AND GEM-SET PENDANT/BROOCH, BY ANDREW GRIMA | FOR H J COMPANY, 1965

the druzy agate set with carved and cabochon rubies and emeralds, highlighted by round brilliant cut diamonds, with a textured cast foliate mount, London hallmarks on reverse | 6.2 cm. long

Jewellers used a range of gemstones in both rough and faceted forms, often subverting previous stones in their treatment of more ‘humble’ materials. For example, Andrew Grima’s amethyst and diamond set brooch (1969, no. 14) is led by the undulating banding at the centre of the amethyst crystal. The rough gem material is applied with textured, naturalistic gold panels of a similar form. The panels are set to frame the banding; their form is suggestive of a stalagtite and stalagmite, with the single claw-set round brilliant cut diamond as a drop of water glistening at the top of the mineral formation. The rough crystal is not just a stage for precious stones. It is used in a more characterful manner, reminiscent of the early 18th century baroque pearl figures by Johann Heinrich Köhler in Dresden’s Grünes Gewölbe, where the impression of the pearl dictates the character of the figure.

In John Donald’s gold, sapphire and diamond set bracelet (1968, no. 24), the crystal form is implied through metalwork. The bracelet is formed of a lattice of small textured gold cubes, scattered with square mixed cut sapphires and round brilliant cut diamonds. The six-sided cubic form and horizontal striations mimic the rough crystal form of pyrite (‘fool’s gold’). The overall design is led by the crystal form; but Donald goes one step further. His playful approach elevates ‘humble’ pyrite, subverting the nature of the ‘precious’ materials used for the bracelet. Donald’s starburst brooch (1963, no. 26) and spinel ring (1967, no. 23) continue his use of geometric crystal forms, albeit with the crystals present. 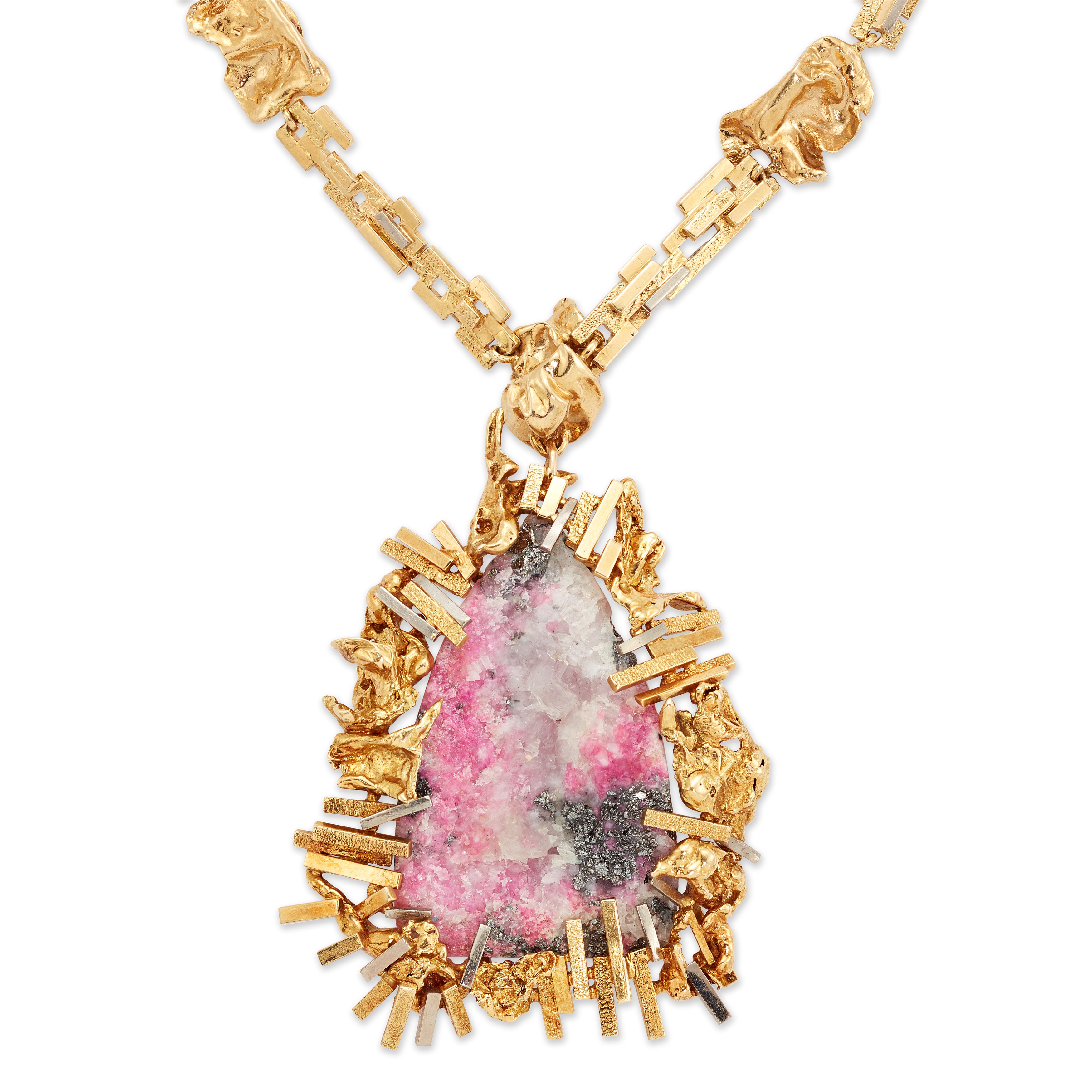 A TWO- COLOUR GOLD AND RHODOCHROSITE PENDANT BY GILIAN PACKARD, 1967

London hallmarks to side of pendant | the pendant 6.5cm long; the necklace 65.7 cm. long

Gilian Packard’s use of rough rhodochrosite in her 1967 pendant (no. 28) and comet shaped brooch (1968, no. 37) demonstrate the continued use of crystals and rough in the period, as do Grima’s druzy agate pendant/brooch (1965, no. 21) and fluorite brooch (1967, no. 25). Jewellers of the period were fully engaging with the crystal form, often in subversive and playful ways. Their designs broke away from the traditional use of gem materials, contributing to the fresh ‘new look’ of British jewellery in the 1960s.