Designs for The Century Guild

In 1884, Morris & Co. manufactured several designs for The Century Guild; a group of artists associated with the Arts & Crafts movement, who sought to preserve the integrity of the artistic trade and its craftsmen. Thought to have been designed by Herbert Horne, one of the founding members of the Guild, this example will feature in our April 2021 auction of Design Since 1860.

In 1875, Morris & Co. began large-scale production of floor coverings, rugs and carpets, designed to complement an ever-popular ‘Morris’ aesthetic in Victorian Britain. A triumph in craftsmanship on an impressive scale, these designs were hailed as some of the finest hand-knotted carpets ever produced in Britain at the time. Morris’ designs were largely inspired by his love of Eastern carpets from Persia Turkey and China, of which he amassed a great deal and used to furnish his own homes, including Red House. Featuring an array of stylised plants and flowers, carefully woven into fields of vibrant colours, the carpets were hugely popular but very expensive to the average customer. As a result, the firm began to manufacture a range of smaller and less costly alternatives to an eager market. Flowerpots were often a feature of these designs, with trailing flowers stemming out from the centre against a cream ground, and a dark blue border. These smaller rugs were frequently used as wall hangings and occasionally placed as bedside rugs in guest bedrooms. 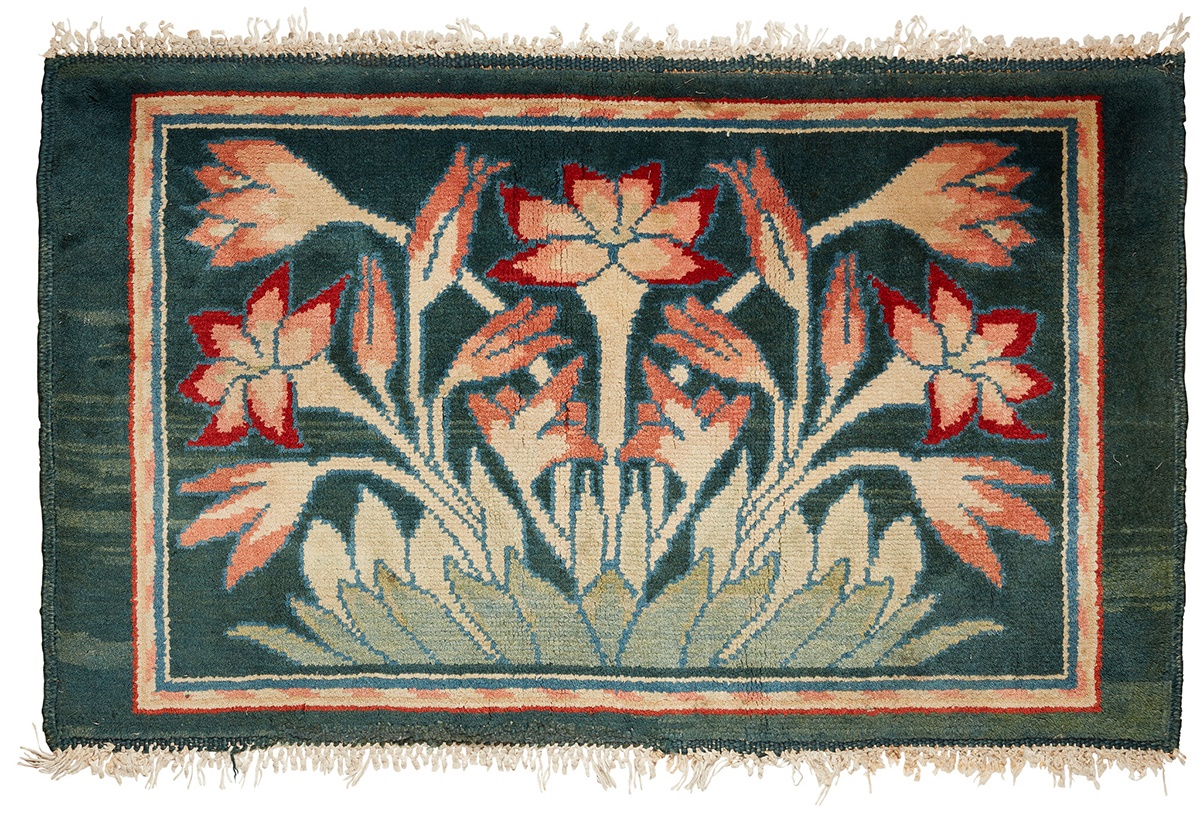 In 1884, Morris & Co. also manufactured several designs for The Century Guild; a group of artists associated with the Arts & Crafts movement, who sought to preserve the integrity of the artistic trade and its craftsmen. These rugs were sold in the Morris & Co. shop and advertised in the Guild’s magazine Hobby Horse. Though Morris never had a hand in designing these, they look back to his earlier Hammersmith pieces, featuring simple patterns of flowers and flowerpots. This rug is thought to have been designed by Herbert Horne, one of the founding members of the Guild, alongside A. H. Mackmurdo and Selwyn Image. Linda Parry comments that of 'the three designers associated with the Guild it is stylistically closest to the work of Herbert Horne'.

Enjoy a Virtual Walk-through Our Saleroom