Opening our June Jewellery, Watches & Silver auction will be a beautiful 19th century replica of the famous Tara Brooch.  Specialist Kier Mulholland takes a closer look at the history of this fascinating piece and its role in the Celtic Revival.

The relationship between the brooch and social status has a long standing history, originating in ancient Rome where certain laws were created to govern the richness of brooches permitted to various ranks of nobility. In the Middle Ages, brooches were worn on cloaks over tunics and, inspired by the ancient Romans, too had the function of signifying status and wealth. Since then, Celtic brooches have become symbols of a culture that prospered in early medieval Ireland. The most common, pennanular, type had a long, moveable pin attached to the ring. The other, pseudo-pennanular, type had a closed ring with two separate terminals and was generally less efficient in fastening the clothing. Traditionally the brooch would be worn at the breast by a woman and the shoulder by a man and by law if worn correctly, the wearer is not at fault if another is injured by the pin. Interestingly, an earlier law also specified that sons of major Kings may wear gold and crystal brooches, whilst sons of minor kings may only wear silver.

The most significant and remarkable example of the fifty such brooches found in Ireland is the Tara Brooch – the ‘Book of Kells’ of Irish jewellery. The Tara Brooch is a pseudo-pennanular Celtic brooch made in 650-750 AD. Such brooches feature throughout Irish folklore and integrate both Christian and pre-Christian beliefs. Due to its incredible preservation and stunning design, the Tara Brooch achieved great fame, being shown at the Great Exhibition of London in 1851, the Paris Exposition Universelle in 1855 and was sent to Queen Victoria to inspect at Windsor Castle.

"[T]he Tara Brooch can be considered to represent the pinnacle of early medieval Irish metalworkers’ achievement. Each individual element of decoration is executed perfectly and the range of technique represented on such a small object is astounding" The National Museum of Ireland

The brooch was supposedly discovered in Ireland in 1850. Although the name suggests association to Tara Hill, traditionally seen as the seat of the High Kings of Ireland, it was a title made up by the Dublin jeweller, George Waterhouse, who purchased it for twelve pounds, as a marketing strategy for the copies they made. A local woman claimed that her two sons discovered the box buried in the sand at the beach at Bettystown. However, it is rather unlikely that a tin box would be able to survive centuries of erosion and movement thus suggesting that the box was actually discovered further inland and claimed to be found at the beach to avoid a legal dispute with the local landowner. For the next twenty-two years, it held pride of place in Waterhouse’s window display, with hordes of people visiting. In 1872 the Royal Irish Academy acquired the brooch and housed it in what today is the National Museum of Ireland in Dublin. 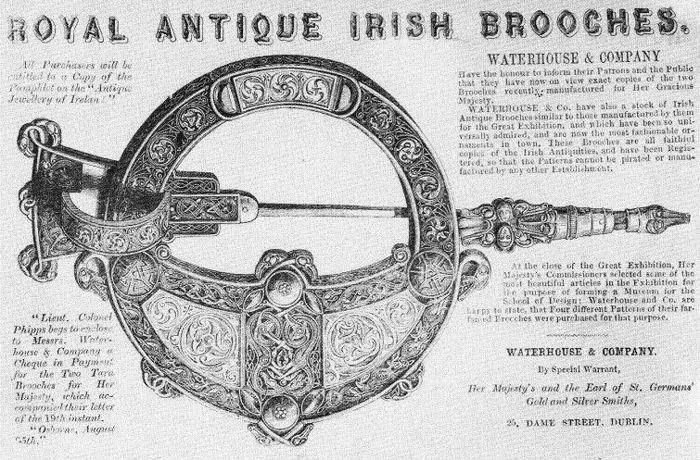 The discovery of the Tara Brooch could not have come at a better time as it was found during the Celtic Revival which was happening in the mid-nineteenth century. In the 1840s Celtic Revival jewellery had become extremely popular and Waterhouse used the Tara Brooch as a basis for replicas and imitations for his Dublin shop. The name ‘Tara’ was chosen not simply for the association with the Kings of Ireland, but because he was ‘fully aware that this would feed the Irish middle-class fantasy of being descended from them’.

Celtic revival jewellery continues to be popular to this day and we are fortunate enough to have a copy of the Tara Brooch in our upcoming sale. This is parcel gilt version of the Tara Brooch, marked Waterhouse Dublin – the jewellers responsible for the name, popularity and imitations of the brooch. The brooch is of conventional form with well cast detail and a fitted box with trade label. Unlike the original, this version has no enamel or amber work; however, it is still beautifully executed.