A unique selection of pieces from a Private Collection will be offered in our upcoming auction of Jewellery, Silver & Watches on 5 December in Edinburgh.

Our forthcoming Jewellery, Silver & Watches auction this December includes an interesting group of items that form a small part of a large London Private Collection.

With homes in London, New York and Paris, the owners travelled extensively, their time often spent in museums and art galleries. This inspired the collection of diverse items from across venues throughout these cities and from antique shops.

The present lots are a further selection from this superb collection that we have had the pleasure of putting forward to auction over the past few years.

Highlights from the collection include a luxurious pair of American gold vases; an early 19th century gold, enamel and crystal desk seal; and a gilt and hardstone paper knife by Hamilton and Crichton of Edinburgh. 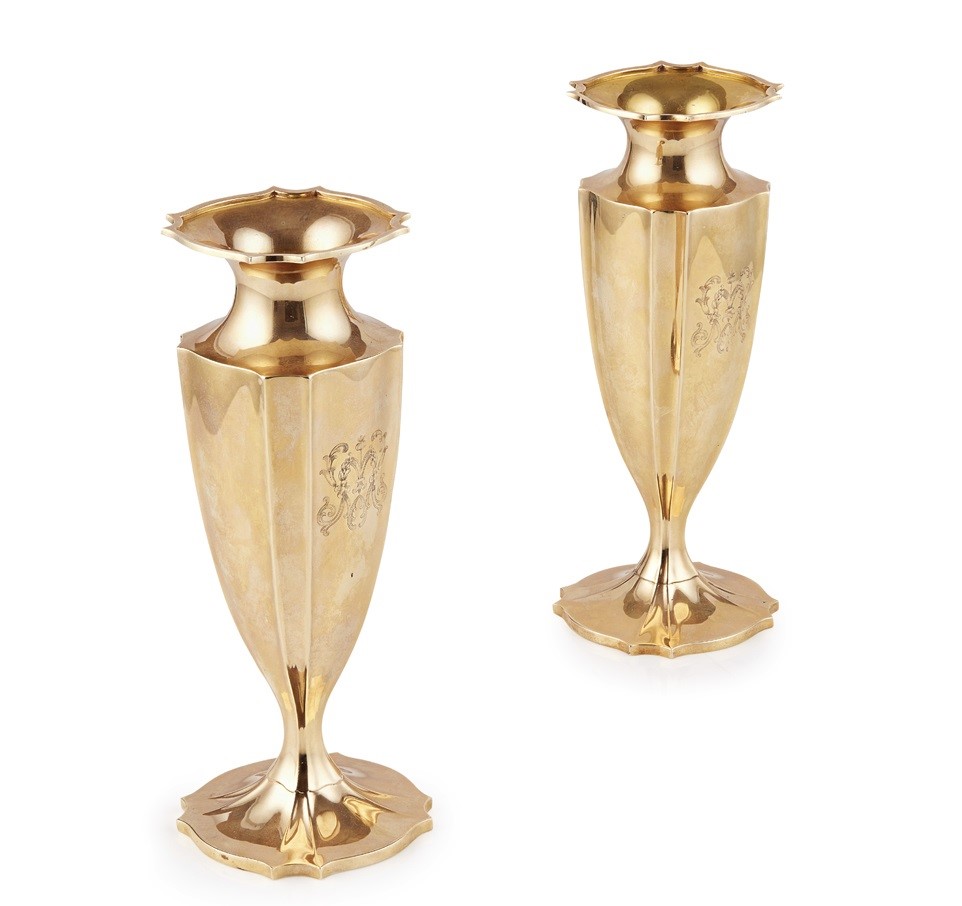 Made by the prestigious firm of Gorham, Lot 395, the pair of American gold vases epitomise the era of flamboyance and luxury. Simple in design and well-constructed, the vases are engraved with a monogram of the original owners. 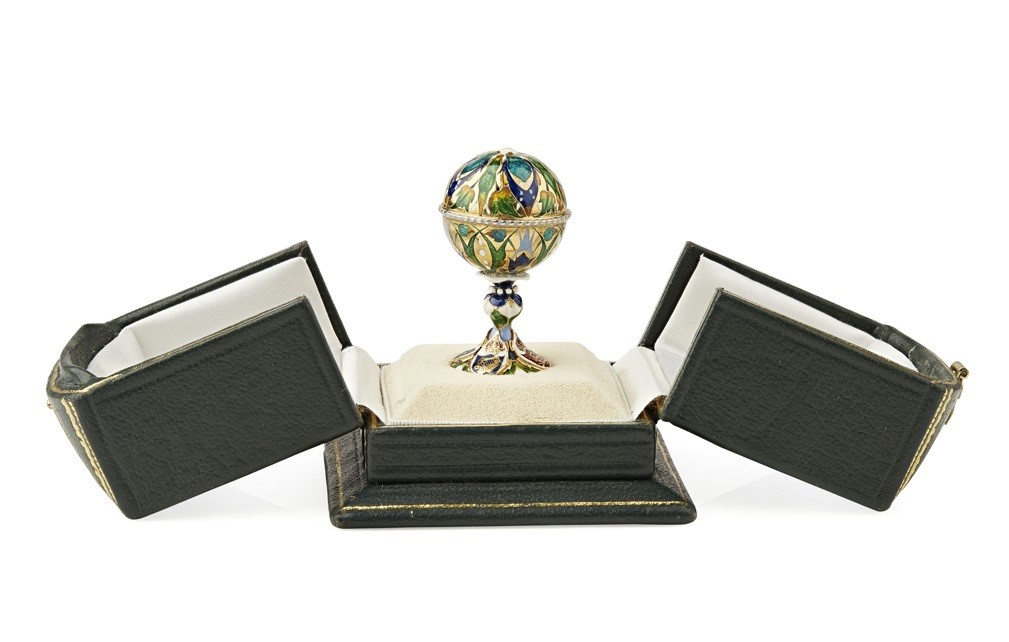 Provenance and history also interested the collectors. The early 19th century gold, enamel and crystal desk seal (lot 389) was purchased originally from Stansted Park sale in 1999. It was made for the Ponsonby Family, the Earls of Bessborough. From research it is probable it was made for the 3rd or 4th Earl of Bessborough, the seal is not hallmarked with a specific date. 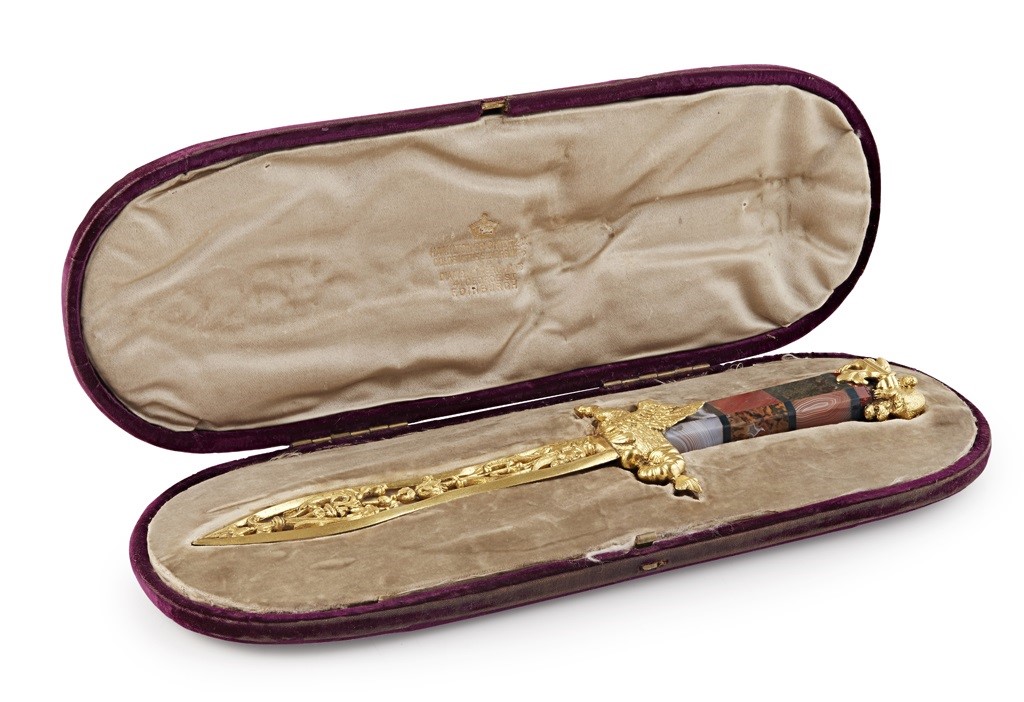 Sotheby’s famous auction at Mentmore in 1977 was the previous home to Lot 360, the gilt and hardstone paper knife by Hamilton and Crichton of Edinburgh with its original fitted case. An unmarked scarce and unusual item, it was probably made by the London silversmith Alexander Crichton who had strong connections with Hamilton Crichton of George Street.

The design of the paper knife follows Alexander Crichton’s most famous wares - a group of claret jugs with wonderful silver mounts. These mounts were inspired by the drawings of Sir John Tenniel for ‘Alice in Wonderland’ and ‘Alice Through the Looking Glass’. This link with Tenniel may date back to Tenniel’s friendship with Sir Joseph Noel Paton when they were involved in a competition to decorate Westminster Hall. Illustrating Dodgson’s books had Tenniel creating some of the most enduring characters of all time. Working these fantasy figures into objects is regarded as Crichton’s greatest triumph. The bold scrolling dragon cross guard and gargoyle style figures to the pommel continues this decorative theme based on mythology and fantasy.

Patronage by prominent Scottish families were an important source of income for the Edinburgh silversmiths and this is a piece purchased by the Rosebery family. Alexander Crichton’s ‘Alice in Wonderland’ claret jugs were collected by the Dukes of Hamilton of Brodick Castle, several which are still at Brodick. On occasion, some appear on the market and always create a good deal of interest.

Other pieces of interest include a group of lots of mid-20th century silver and enamel. Items included in these groups include small clocks for the dressing table (lots 369-371). Lots 356-359 are various small boxes brooches and lipstick holders, very typical of the period being brightly coloured. Lot 273 is an interesting example of mixed metal wares incorporating silver copper and other metals forming a patch work effect, the inscription is typical of the period ‘Be a Gal’.