A Design by Charles Heathcote Tatham

Based on a suite of tables designed by Charles Heathcote Tatham for Marsh & Tatham, this late 19th/ early 20th century pair of 'Bridgwater House' style giltwood, Scagliola Porphyry, & painted dolphin console tables were a highlight in our May 'Five Centuries' auction, selling for £17,500 (inc premium).

This pair of giltwood tables, with their distinctive entwined dolphin supports, are based on a suite of at least twelve tables designed by Charles Heathcote Tatham for Marsh & Tatham, and commissioned for George Granville Leveson-Gower, Marquess of Stafford and 1st Duke of Sutherland. 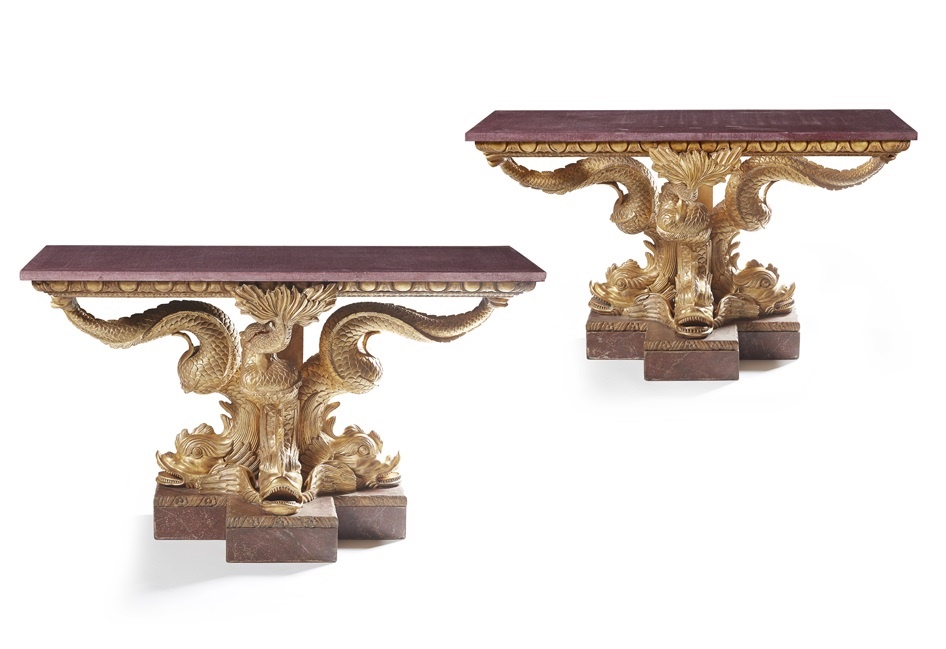 Intended for the 'New Gallery' at Cleveland House in London, later called Bridgwater House, the suite of tables were designed to display marble slabs purchased in Italy in the 1750s by the Duke of Bridgwater. Furnishing the vast art gallery which housed paintings from the famed Orleans collection, the tables varied in size to accommodate the different marble slabs. The largest pair with pink granite tops remain in the collection of the Duke of Sutherland, while other examples can now be found in museums and collections around the world including the Fitzwilliam Museum in Cambridge and the Museum of Fine Arts in Boston.

We were delighted to be offer this late 19th/ early 20th century pair of 'Bridgwater House' style console tables in our 'Five Centures' auction on Tuesday 14 May in Edinburgh.