Art & Design from Castle of Park

Highlights featuring in Design Since 1860

We are delighted to offer a group of beautifully presented works from Castle of Park in Aberdeenshire (Lots 213 to 278) this April.

Castle of Park has its origins in the 13th century on land that formed part of the Royal Forest of Banff. The present house comprises a 16th century tower house with extensions dating from the 17th, 18th, and 19th centuries, and remained in the same family for some four hundred years. It was eventually sold in the 1970s and passed through several owners, most recently having been purchased by Rebecca Campbell-Wilson and her late husband Neil, who died in 2014. They set about returning it to a family home and creating a more castle-like ambience in keeping with the architecture and history of the property. Neil had worked at Christie’s South Kensington for a decade in the mid-1980s and early 1990s. One of the highlights of his career there was the sale of Penkill Castle in Ayrshire, the home of the pre-Raphaelite painter William Bell Scott and his mistress Alice Boyd. The sale and the castle had a lasting effect on him and not only cemented his predilection for the art and design of the period but his dream of owning a castle in Scotland, eventually satisfied by the purchase of Castle of Park.

In 1996 he left Christie’s to become a dealer in Victorian art and developed a reputation for selling British pre-Raphaelite and Symbolist pictures, distinctively presented in bespoke gilt frames. Each exhibition was put together with scholarly and lavish catalogues. Many of the beautifully presented works offered here formed part of this stock, and the furniture and lighting were chosen especially for the castle, which has now been sold.

Here we take a closer look at a few of the highlights featuring in our April 2021 auction of Design Since 1860...

Jessie Bayes, best known for her remarkable book illuminations, was born into a family of artists in 1876. Her father Alfred Walter Bayes was an etcher and book illustrator who regularly exhibited at the Royal Academy of Arts and encouraged his four children in the arts from an early age. She studied under her brother Walter Bayes, who was a well-known artist and critic at the time and was sister to the sculptor Gilbert Bayes and the painter Emmeline Bayes.

Bayes exhibited widely with the Arts & Crafts Exhibition Society, and at the Royal Academy and the Baillie Gallery in London. In 1922, Bayes exhibited some of her illuminated books, as well as paintings on vellum, fans, and panels, at the Art Center in New York. She gradually expanded her repertoire to include painted and gilded decoration on furniture as well as interior design and stained-glass work.

This bookcase stood in the study of ‘The Pines’, a large Victorian villa in Putney, shared by the poet, playwright, novelist, and critic Algernon Swinburne (1837-1909) and his companion, the poet and critic Theodore Watts-Dunton (1832-1914). A label affixed to the interior of this bookcase reads: 'These two bookcases which for thirty years were in Swinburne's study at The Pines are of a special interest. They were designed and executed by Whistler at the conclusion of the settlement of the quarrel of Leyland over the Peacock Room. Watts-Dunton acted as solicitor in the affair & Whistler gave one each of the bookcases to the Housemates at The Pines. Both however find themselves in the study of the Poet. Whistler painted the insects and fr** etc himself'.

The bookcase, made up with Japanese lacquered panel ends, can be seen in situ at ‘The Pines’ in a photograph of circa 1904 and later gilt embellishments can also be made out on one of the end panels. The author of the note is unknown but may have been a subsequent owner. The ‘pair’ of bookcases may allude to the fact that the bookcase is double-sided. Another piece of lacquer furniture in the room was a gift from the artist Dante Gabriel Rossetti (1828-1882), a friend of Watts-Dunton and it seems that quite several pieces of furniture at ‘The Pines’ were a gift of the artist. 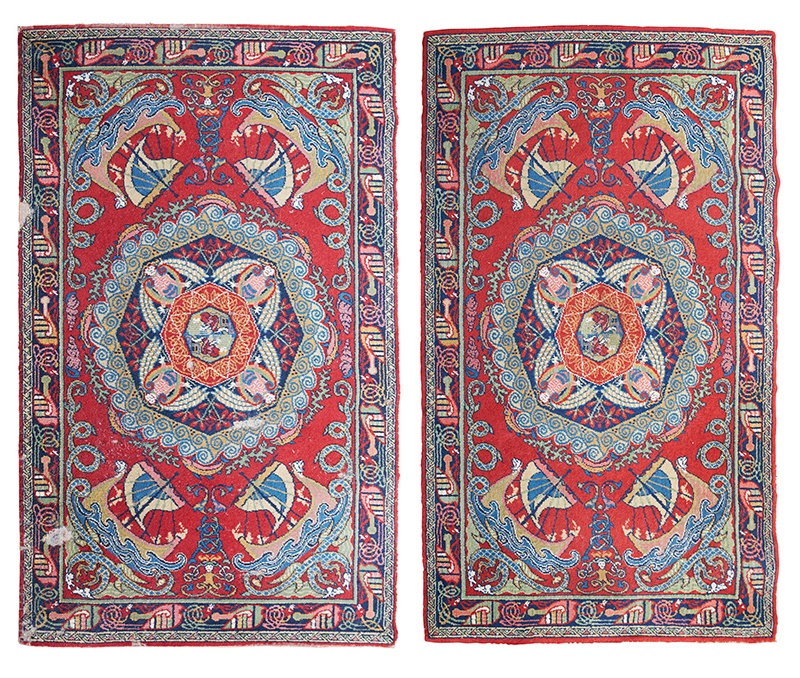 Originally from Scrabster in Caithness George Bain studied at the Royal College of Art and began his career as a book illustrator. He studied Celtic art and in 1951 published Celtic Art, The Methods of Construction. He designed several carpets of Celtic influence for Quayle & Tranter of Kidderminster during the late 1940s.

Having initially established himself as a portraitist, Victor Hume Moody later enrolled at the Royal College of Art in London, and it was here, under the influence of William Rothenstein, that his career as an artist profoundly changed. Rothenstein encouraged him to focus on Classical themes and compositions, and Moody remained faithful to this throughout his career, using techniques from the Italian Renaissance as his source. His strong sense of form and a more sensual approach to figurative painting earned him critical acclaim and his works were widely exhibited across the UK. His fascination with the classical world had a lasting effect on his daughter Catherine, yet while her father tended to experiment with a variety of techniques such as tempera and gesso, Catherine’s works are predominantly executed in oil and pastel. She followed in her father’s footsteps later in life too, taking over his 27-year tenure as headmaster of the Malvern School of Art in 1962. Despite the growing popularity of Abstract and Conceptual art, she remained a passionate advocate of the arts and sought to keep the tradition of figurative painting alive, leaving a lasting legacy for the School and her students.

Browse the works from Castle of Park ⇒

Enjoy a Virtual Walk-through Our Saleroom