Select items from the Axel Guttmann Collection of Ancient Arms & Armour will be offered in our forthcoming auction of African & Oceanic Art and Antiquities in Edinburgh on 27 November.

In 1982 Axel Guttmann (1944 – 2001) bought his first ancient piece of armour, a Roman helmet. Within eleven short years his remarkable collection has flourished into over 1200 objects housed at his private museum on the outskirts of Berlin.

Guttmann’s collection spanned across the centuries and across continents; from the western Mediterranean to the Near East, the Bronze Age to the fall of the Roman Empire. From the very beginning he made his collection available for academics, greatly aiding the study of the development of ancient weaponry and armour, his publication series Sammlung Axel Guttmann remains a leading source to this day.

This November, select items from the Axel Guttmann Collection of Ancient Arms & Armour will be offered in our auction of African & Oceanic Art and Antiquities in Edinburgh. Highlights include an Iron Age Uratian Belt, a Celtiberian "Pugio" Dagger & Scabbard from the 1st century BC, and a Samnite Triple-Disc Breastplate Set dated to 420 – 350 BC.

This engraved bronze, Uratian Belt is decorated with images from mythical scenes showing goats, bulls and lions hunted by otherworldly winged creatures. Each panel is separated by images of flowers, palm and date trees. It has incisions along the border for attachment to a leather backing and is mounted on a plexiglass backing. A similar example exsists in The Metropolitan Museum of Art in New York (accession no 52.123).

A remarkable survival, this shortarm dagger is of Iberian construction, but the shape later become more famous as the Roman pugio, the standard issue legionnaires sidearm. It was when campaigning against the Celtiberians in the first century BC that the Roman form first came into widespread use, suggesting the Roman army appreciated the strengths of the native weapon. Interestingly the decorative square and teardrop shaped cavities on the sheath of the present example have been patched with metal in ancient times. Perhaps to better guard the iron blade from the effects of wet weather. 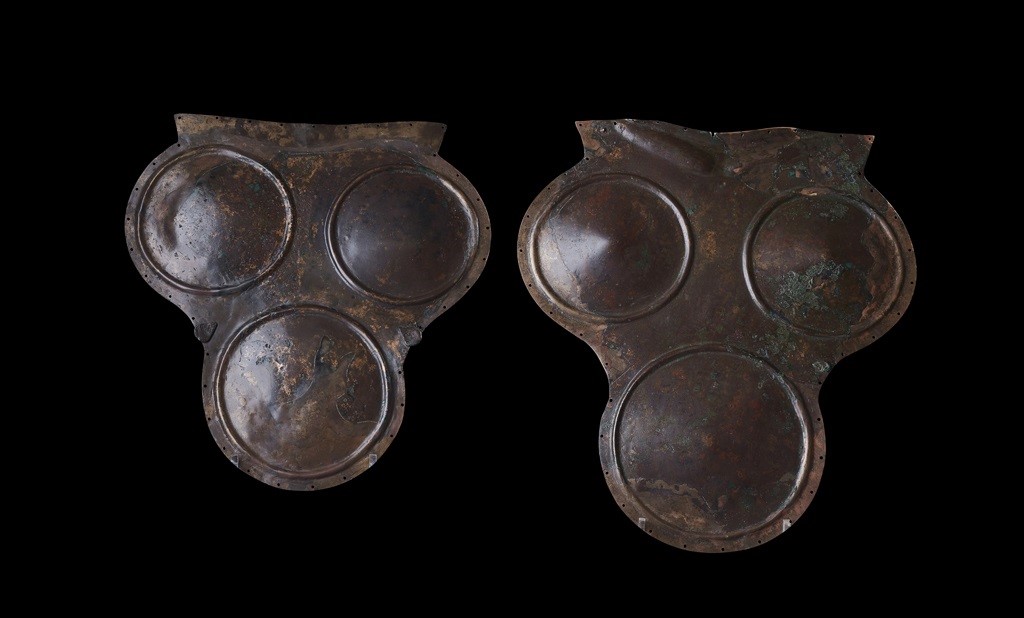 Another highlight in the sale is this hammered bronze, Samnite triple-disc breastplate set. Composed of a front and back plate, both plates have three discs set in a bronze sheet forming a triangular shape. Originating from South-Central Italy, they are dated to 420 - 350 BC.