A Rare Group of A Scholar's Family

Celebrating the significance of Scholar Zhou Zaotang's family in the political domain in the Qing Court, this rare group of ancestor portraits is an intriguing lot in this November's Fine Asian & Islamic Works of Art sale.

The centre of this group of portraits is Zhou Zaotang, who commissioned this rare group of his ancestor portraits. This is to trace back, or celebrate the significance of his family in the political domain in the Qing Court. Spanning over three generations, Zhou's commission of his ancestor portraits are detailed with their respective names. However, in a patriarchal society, only the males have their full names and females their maiden names. The details also include their official ranks, political careers, dates and times of birth and death, and their burial sites. 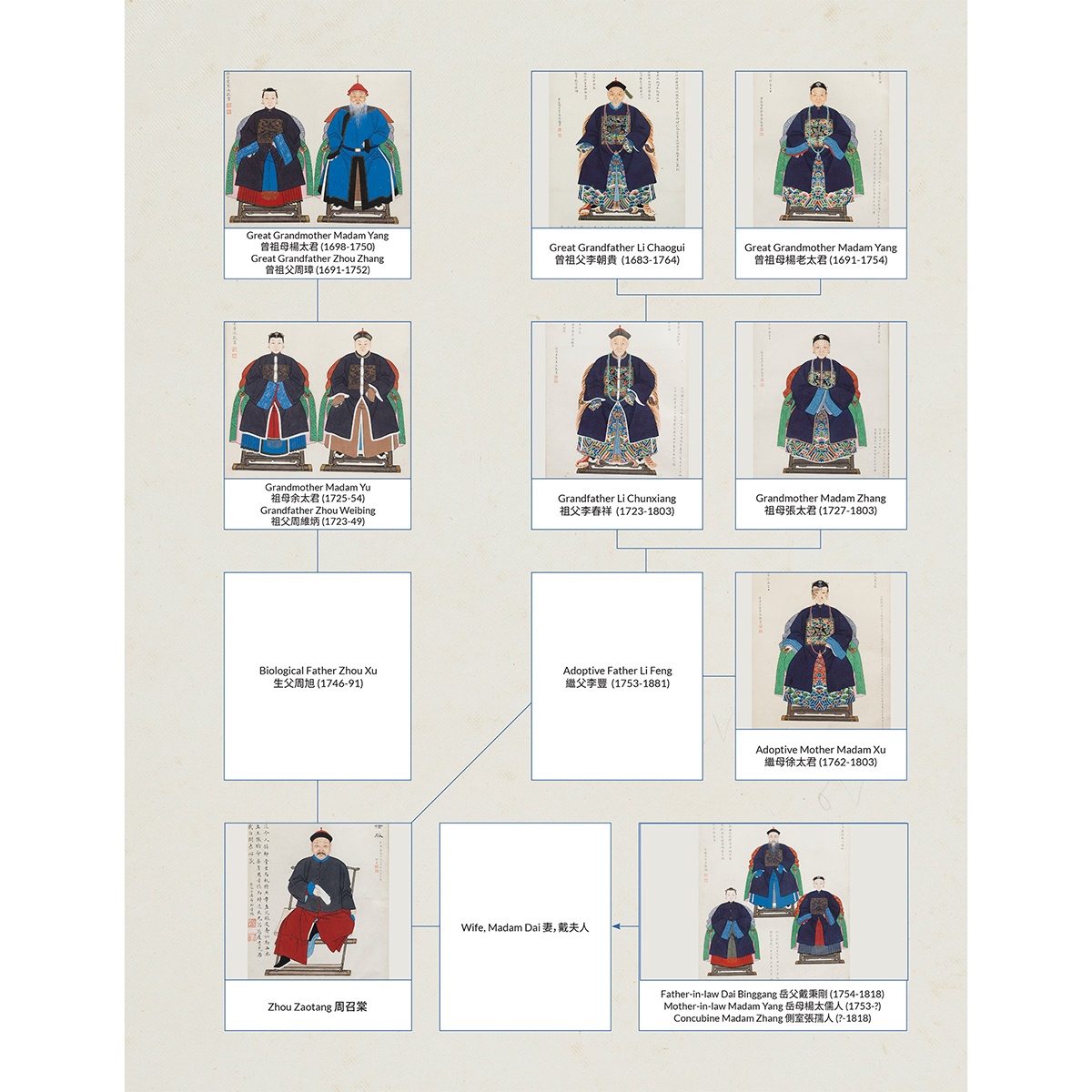 The comprehensive original collection (excluded in this lot) discloses that the grandfather Zhou Weibing, had a son Zhou Xu (1746-1791); Whereas grandfather Li Chunxiang also had a high-ranked son Li Feng (1753-1811). Both of whom the commissioner Zhou Zaotang would call father. It is revealed in The Zhou and Li's Family Genealogy (compiled and edited by Zhou Zaotang in the Guangxu period), that during the fifty-sixth Qianlong year, 1791AD, the same year of Zaotang's biological father Zhou Xu's death, Zhou Zaotang would be adopted as a son by Li Feng. Hence, there are two lineages of Zhou and Li in Zaotang's ancestorship.

This collection offered here does not include Zhou Zaotang's wife. Therefore, it is unclear who she was. However, through the ancestor portraits of Zhou's father and mother in laws: Dai Binggang (1754-1818), his wife Madam Yang (1753-?), and his concubine Madam Zhang (?-1818), we can establish that she was Madam Dai. 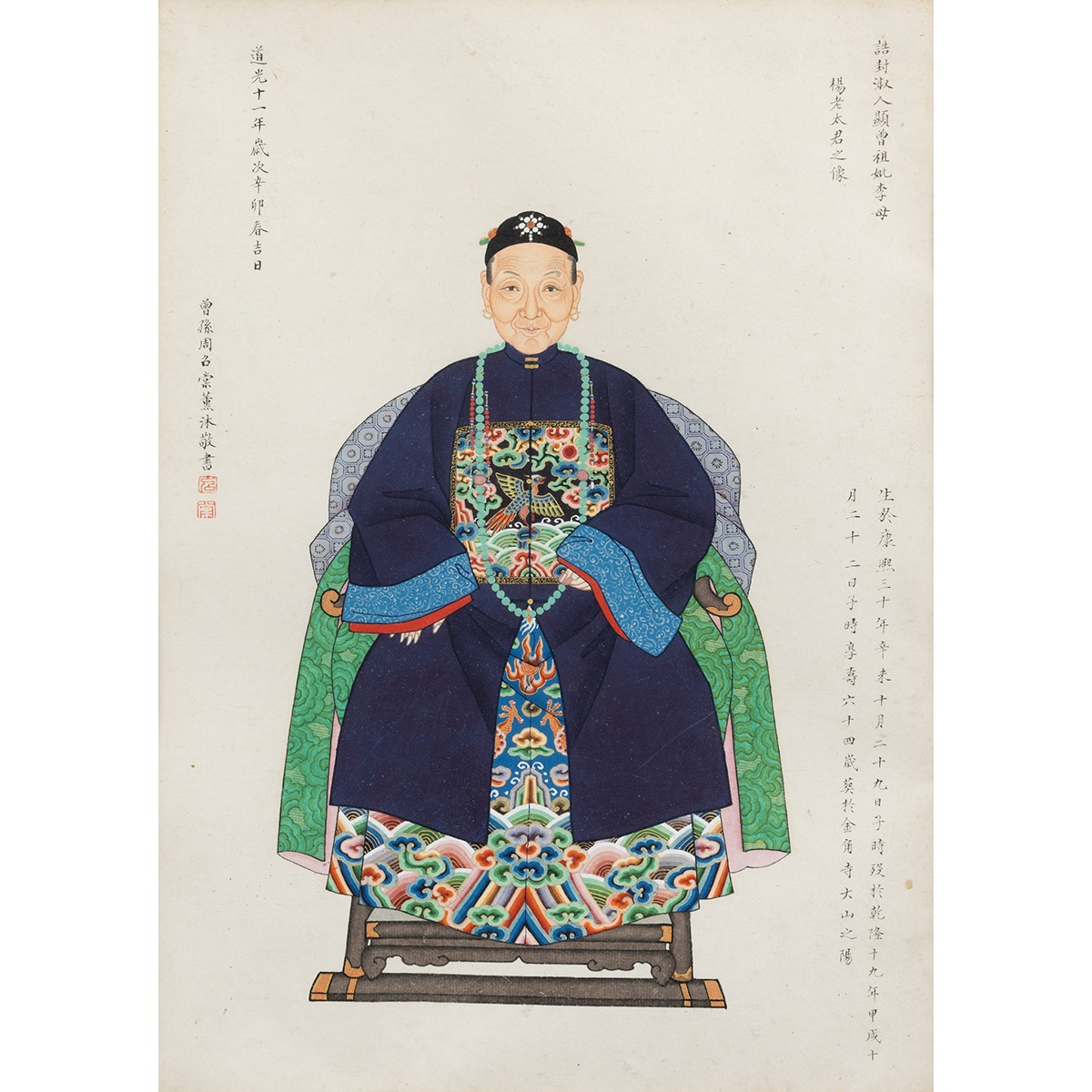 We also learn from the ancestor portraits that the Lis were of more significant social ranking than the Zhous. The great grandfather Li Chaogui was the third military-ranked official. All of the ancestor portraits are dated to the eleventh year of Daoguang period, year of Xin Mao, corresponding to 1831 AD. With the attribution of Zhou Zaotang in central-left, sealed 'Zao', 'Tang'.

From the private Scottish collection of Henry Glenlyon Campbell Roger (1919-1999), of Duddingston Village, Edinburgh, Lot 64 was inherited from the estate of his father, Herbert Campbell Roger, OBE (1st Jan 1920), who was awarded the Chevalier de L’Ordre de la Couronne by King Albert of Belgium for his service during the Great War (4th Dec 1919) and as Secretary of the British Red Cross for some 20 years. 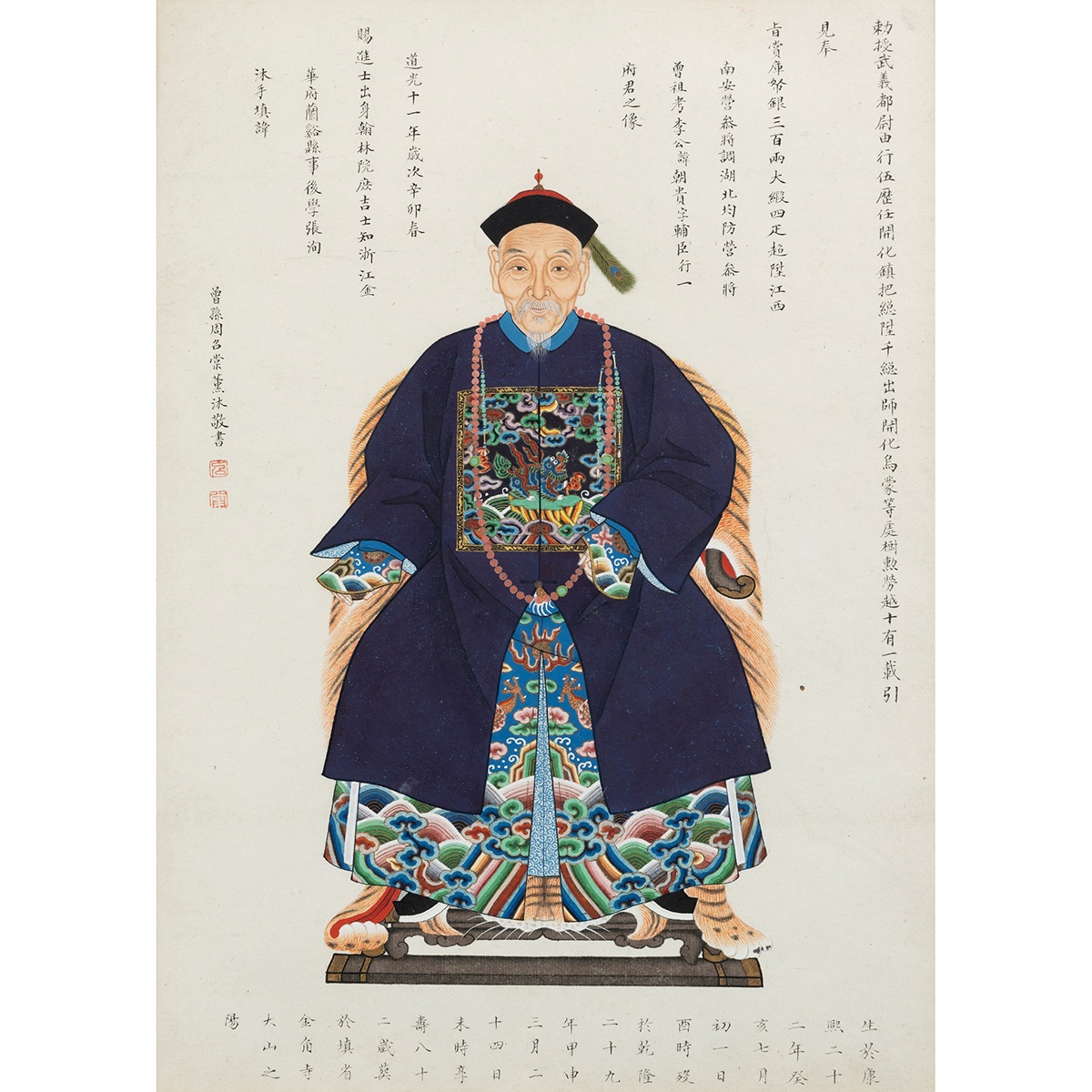 Although anecdotal, the family used to discuss the adventures of William (James) Steel, father of Mrs Anne Lang Roger, a Master Baker of 498 St Vincent Street, Glasgow. He died, aged 47 on 28/5/1895 (BMD Barony) after a number of years as a contracted Master Baker to the colonial forces in the Indian Mutiny and the Opium wars. He was believed to have brought a considerable number of Far Eastern items back with him. William Steel was wealthy and variously described as Head of the house, house factor, Master Baker and a mill owner (1881 Census, Glasgow). These items would have fallen to Mrs Anne Lang Roger (nee Steel), his daughter, by inheritance. The private family collection was considerable and was enhanced by further purchases made by Mrs Anne Lang Roger's husband Herbert Campbell Roger in accordance with the fashion trends towards the end of the Victorian period.

A further fine example from this private collection is Lot 22 in our 04 November sale. Pictured above, this Qing Dynasty 'Dragon' throne cushion cover embodies all the characteristics of an imperial textile, created for the emperor’s throne cushion.