‘Where Sinks the Voice of Music into Silence’

Bold and decorative, ‘Where Sinks the Voice of Music Into Silence’ displays vibrant colour and ecclesiastical details that were a signature of Ancell Stronach's painting. We were delighted to present this richly dramatic and decorative work to auction in our 10th June Scottish Paintings & Sculpture sale where it acheived a new world auction record at £57,500 incl premium.

Ancell Stronach is generally an unfamiliar name, even to Scottish Art enthusiasts, but in his day he was a significant figure in the Scottish art scene. Born in Dundee, he trained at the Glasgow School of Art, winning many awards and a travelling scholarship during his studentship. Following his studies, he worked professionally as an artist; designing stained glass, painting murals, decorating churches and establishing a reputation as a portrait artist. Alongside his own painting, he also taught, rising to the position of Professor of Mural Painting at Glasgow School of Art. He was elected a member of the R.S.A. in 1934, and exhibited internationally; at the R.S.A., R.A., Paris Salon and in exhibitions in Canada, New Zealand and America. All the markers of a significant and accomplished career. 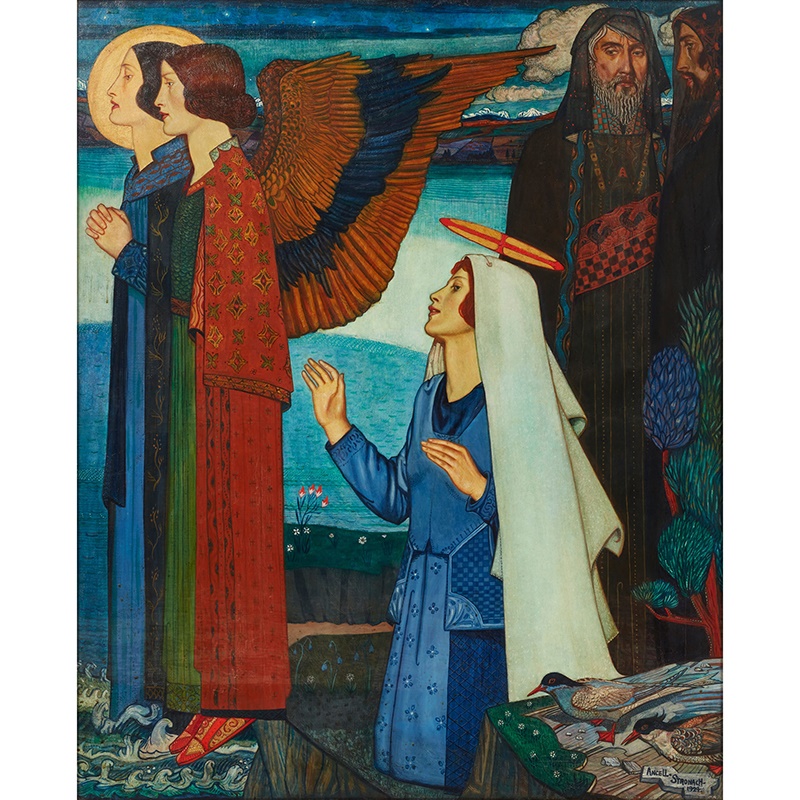 ‘Where Sinks the Voice of Music Into Silence’ is bold and decorative, with the vibrant colour and ecclesiastical details that were the signature of his painting at this time. Stronach pulls detail, poetry and inspiration together masterfully in this work, with areas of rich, flat colour interspersed with delicate patterning and design. A strikingly decorative piece on first glance, close attention reveals generously considered details in aspects as diverse as the tendrils of the male figures beard, the curling waves at the bottom corner and the snow-topped hills in the distance. The composition is accomplished: the delicately delineated angelic wings are centred in the canvas, with the figures placed in a ‘V’ around them, maintaining balance and visual interest as every inch of canvas is utilised. The result is a richly rewarding viewing experience.

Stronach’s poetic title does little to reveal the meaning or moment that this work depicts but it assists in evoking the atmosphere that the painting itself conveys. The feeling is symbolic and meaningful with a sense of mysticism, creativity and spirituality. Artistically, Stronach was inspired by early Italian fresco painters and the Pre-Raphaelites, though his commitment to mural painting and stained glass design also shines through in this significant work. His chosen style and subject reflects the wider Celtic Revival movement prevalent in Scotland’s arts scene at this time and visible in the work of other artists such as John Duncan and Phoebe Anna Traquair. The Celtic Revival and the Pre-Raphaelites were concerned with looking to a distant past for inspiration and Stronach strives for that here. The ensuing melding of historic and modern lends the painting an essential timelessness in its beauty.

At the outbreak of war in 1939, Stronach felt his opportunities as an artist were greatly reduced by the extenuating circumstances and took the opportunity to change direction, pursuing a long-standing interest in animals and the circus. He married a professional acrobat and they toured together with his show, entitled ‘Ancell and his 40 Painted Pigeons.’ He did not engage with the art world over the course of the rest of his life though it is believed he continued to paint for personal pleasure. It is for this reason that his name remains relatively unknown and the appearance of his works on the market so rare; ultimately his professional painting career only lasted for a very limited period, despite his talent and success.

‘Where Sinks the Voice of Music into Silence’ was first exhibited at The Royal Glasgow Institute of Fine Arts in 1924. More recently it was purchased by the current vendor’s late husband at the Fine Art Society in 1980. The vendor remembers the dramatic moment of seeing this work for the first time, and the immediate decision to purchase. In the forty years since, it has hung in just two locations, his architectural practice in the West End of Glasgow and their home in Stirlingshire. A rare opportunity now presents itself for this richly dramatic and decorative work to find a new home.