This January, we are delighted to offer works by revered and influential American photographers, Richard Prince & Harry Callahan, in our auction of Contemporary and Post-War Art in Edinburgh.

The New York Times has described the contemporary American artist Richard Prince, as ‘one of the most revered artists of his generation.’ His work has met with huge critical acclaim and popular success but as with all of the most successful contemporary artists, Prince’s work has courted some controversy. His breakthrough series Cowboys was created using a technique of re-photography; with the artist selecting existing imagery that appealed to him and re-photographing it, sometimes cropping out promotional text or adjusting and cropping the composition before presenting the new photograph in a fine art context. The original series, and ensuing explorations of other distinctly American groups and subcultures, including bikers and their girlfriends, launched Prince’s career. Yet, on occasion, ethical and legal disputes have arisen from photographers who feel their work has been unfairly used and profited upon by the artist.

With re-photography, the artist’s eye and his process of selection becomes the aesthetic action and Prince himself has described his process as similar to beach-combing or going into the studio and ‘bumping into things.’ This sense of sifting through huge volumes of imagery and ideas to select a very specific few is a particular skill and way of working that the artist developed whilst working at Time Life’s cutting service, where he also gained a deep familiarity with advertising imagery. As an artistic practice, Prince started using re-photography in 1977, and at that time then disowned all his previous artistic work.

All artistic choices and processes are important, yet it seems especially valid to explore the meanings and suggestions of Prince’s selected imagery, as it is the selection rather than any creation that is his artistic labour. Cowboys was his breakthrough series, and the cowboy, in particular, is a distinctly American fantasy view of masculinity. By selecting them as his subject, Prince at once celebrates the fantasy and icon, while also exposing its unreality, particularly as many of his cowboy images are taken from Marlborough advertising campaigns, where the original images were taken by photographers hired by the company to create such fantasy imagery, and often featured posed models rather than real men living this lifestyle. Girlfriends offers a similar fantasy; associated with biker gangs, these women have shaken off expected social standards to find their own freedom in lifestyle and expression. They are real women but are often presented within an almost soft-porn aesthetic. 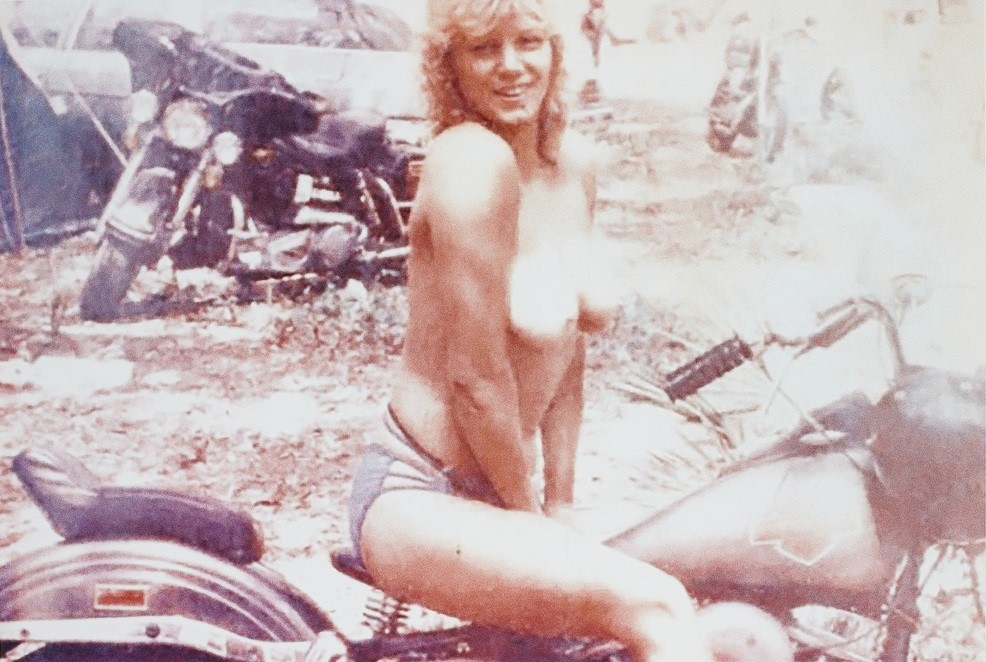 Prince continues to be captivated with similar themes and techniques, and more recently he has turned his attention to social media, spending hours sifting through the profusion of media online before re-photographing and captioning Instagram photographs, playing around with a blurring and then distinction between selfies, self-portraits and portraiture. Time will tell whether these 21st century images will endure and captivate as much as the Cowboys and Girlfriends imagery has.

Harry Callahan was an influential figure in the canon of great American photographers of the 20th century. Born in Detroit, Michigan, he was self-taught in the art form, eventually leaving his job at Chrysler to pursue it fulltime. By 1946 he was invited to teach photography at the Institute of Design in Chicago by László Moholy-Nagy. He moved to Rhode Island in 1961 to establish a photography program at the Rhode Island School of Design, teaching there until his retirement in 1977.

His method of working consisted of a diligent routine; every morning he would traverse his local neighbourhood taking photographs, and every afternoon he would produce proof prints of the best negatives the day had produced. Despite this, he was meticulous about what he produced for public consumption; ultimately producing less than half a dozen final images a year.

The two works offered here for sale are representative of two of his key areas of visual interest. ‘Detroit’ is demonstrative of his fascination with the urban environments he inhabited, as well as perhaps connecting to his roots at Chrysler and early studies as an engineer. It is also an example of his interest in experimental photographic forms, including multiple exposures and, as here, blurring.

The second work depicts his most important and heavily featured sitter: his wife Eleanor. She frequently modelled for him in various settings, and here we find her reclining, nude, in a heavily vegetated, almost Rousseau-esque environment.

Callahan is considered one of the few innovators in modern American photography, and his pioneering work in the medium and contribution to education has assured his legacy amongst subsequent generations of photographers and collectors alike. Today, Callahan’s works are held in the collections of The Museum of Modern Art in New York, the Smithsonian American Art Museum in Washington, D.C., and the Art Institute of Chicago, among others.