The Tales of Beedle the Bard

A deluxe copy of J.K. Rowling's 'The Tales of Beedle the Bard' produced in aid of the charity Children's High Level Group (Lumos) will be offered in our 2 October Rare Books, Manuscripts, Maps & Photographs auction in Edinburgh. 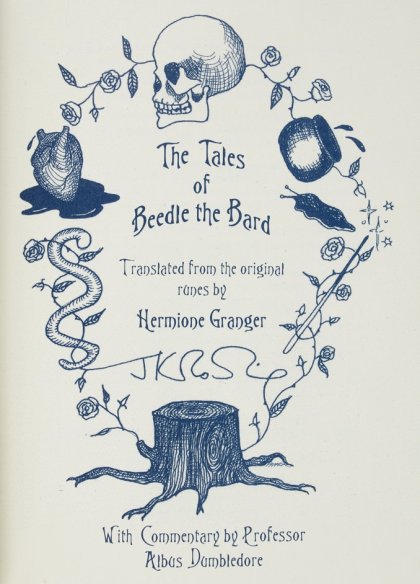 "'You've never heard of The Tales of Beedle the Bard?' said Ron incredulously. 'You're kidding, right?'" - the aghast tones of Ron Weasley upon discovering his friend, Hermione Granger had never read the wizarding world's most famous fairy tales.

The Tales of Beedle the Bard first appeared in J. K. Rowling's Harry Potter and the Deathly Hallows described as a collection of Wizarding children's fairy tales, so that while Ron Weasley was familiar with the stories, Harry Potter and Hermione Granger had not previously heard of them due to their non-magical upbringing.

“This is a beautifully produced book, made even more special by the fact that it is inscribed by J.K. Rowling. “The Tales of Beedle the Bard” are critical to the Harry Potter stories, making this an important work for fans of the series – this deluxe edition is also very limited, with only just over 100 signed copies produced.”
- Cathy Marsden, Book Specialist

J.K. Rowling subsequently wrote The Tales of Beedle the Bard, producing a deluxe copy of the work in aid of the charity Children's High Level Group (now Lumos). 100 signed, numbered copies of this work were randomly distributed to buyers on Amazon.com, who were surprised to receive a special copy of the book in the post. This book is an out-of-series copy, specially signed by Rowling.

This special edition is inscribed, "Christmas 2008. To Di, with lots of love, J.K. Rowling (Jo) x." The book is bound in original brown calf binding embellished with a metal skull, corner pieces and clasp incorporating replica blue gemstones, which can be encased in a morocco bag. The book is accompanied by an envelope of 10 Collector's Edition Prints and both are housed in a velvet-lined brown calf box.