A Window into an Ancient World

The work of a master metalsmith, this shield tells the story of arms and armour production for the elite of Celtic society during the 5th century B.C. A remarkable window into both ancient Celtic craftsmanship and ritual practice more than 2,500 years ago.

This shield is the work of a master metalsmith active at some point in the 5th century B.C. producing arms and armour for the elite of society. Of circular form and produced from a single sheet of bronze; the design features a series of concentric bands rising into a domed boss at the centre decorated with a repoussé border of small dots. Its design suggests an origin in Ireland or perhaps the British Isles, indeed a similar example can be found in the National Museum of Ireland in Dublin (no. IA:1872.15).

As an actual defensive weapon, it is wholly impractical for use in battle. A sword or spear would comfortably punch through the sheet bronze and research shows that whilst the vast majority of shields found dating to this period are constructed from metal, actual shields used in combat would have most commonly been formed of bark or hide. 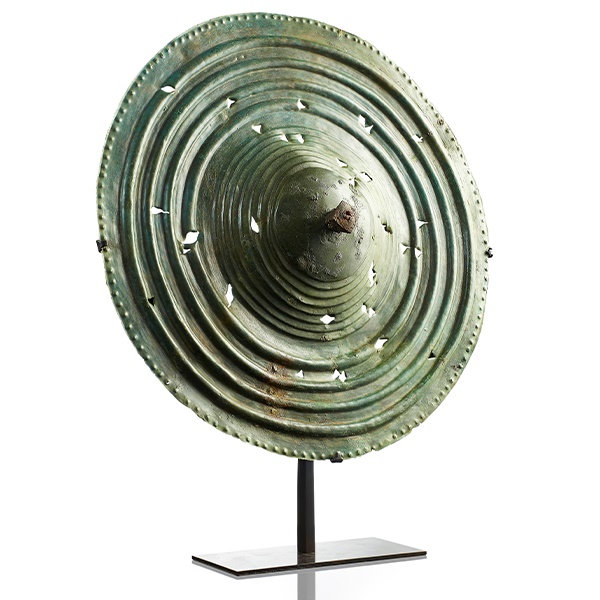 Instead, this piece was created as a work of art, to be worn and displayed on particular occasions, festivals and religious events. In a society where worked metal remained a highly valuable commodity, the shining polished bronze would have dazzled and impressed. The individual who owned this shield would have been of chiefly rank, their status demonstrated by their ability to commission and own prized objects such as this.

The most important aspect of this shield though is not its original design, but the series of diamond shaped perforations which are visibly present across the entire body. These are spear marks - but as previously mentioned this was not an object to be used in combat. In order to understand what is going on here we must look into ritual practices that there were written about in contemporary Roman sources and have been attested by modern archaeologists.

The ancient Celts were a polytheistic society, their deities, much like those of the Mediterranean, required constant appeasement through sacrifice and gift giving. This gifts provided to the gods needed to be items of the highest value possible to society, so metalwork; with its rarity, beauty and complex production was often selected.

A number of studies have demonstrated that the deposition of artefacts in sites linked to water; rivers, lakes and springs - was a particularly widespread custom amongst the Celts in the Bronze and Iron Ages. In fact, we continue this practice today when we throw coins into wells to make a wish. In short, water was seen as a threshold or gateway to the divine world where the gifts could be received and prayers answered. However, before the object could be given, first it had to be broken or “killed”. Swords would be bent, razors or shears blunted and shields pierced. To explain this practice, one theory contents that the gift could not be given until the “power” of the object was broken and its spirit removed. A more modern parallel would be the Maori concept of mana, the life force that permeates not only people, but objects. Any article worn or owned by an individual can become imbued with their mana, their accomplishments and personality.

In this context, ancient Celtic shields such as the present example, to be offered in our online only African & Oceanic Art, Antiquities & Natural History auction this May in Edinburgh, would have been seen as personal to such an intense extent that it is hard to comprehend. They were not simply the property of an individual, they were an indivisible part of them. As such, this remarkable shield is a window into both ancient Celtic craftsmanship and ritual practice more than 2,500 years ago.