Decorated with Jacobite symbols and emblems, this 18th century glass features mottos that not only show Jacobite support but also gives a clue to the identity of the original commissioner. This rare example is to be offered in our forthcoming Scottish Works of Art & Whisky auction.

This rare Jacobite glass features several distinctive Jacobite symbols and emblems, alongside what appears to be some unique mottos, previously unrecorded. Engraved mottos such as FIAT or REDITTE, as well as references to Jacobite groups such as the Friendly Hunt are a regular feature of Jacobite glasswares and other related works of art. The appearance and combination of unusual mottos on this glass not only illustrates a strong allegiance to the cause, but also helps shed some light on the identity of the original commissioner, or clan at the very least.

'HANOVER TO THE DEVIL' indicates the owners' hope that the Stuart legitimacy would one day be recognised, and the Hanoverian Kings would not only be removed from the throne but sent to the Devil. Other glasses with the House of Hanover and the Devil are recorded, notably within the collection of Traquair House. 'DAMNATION TO THE UNION' is overtly an anti-Union sentiment that many Scots still held by the mid-18th century. 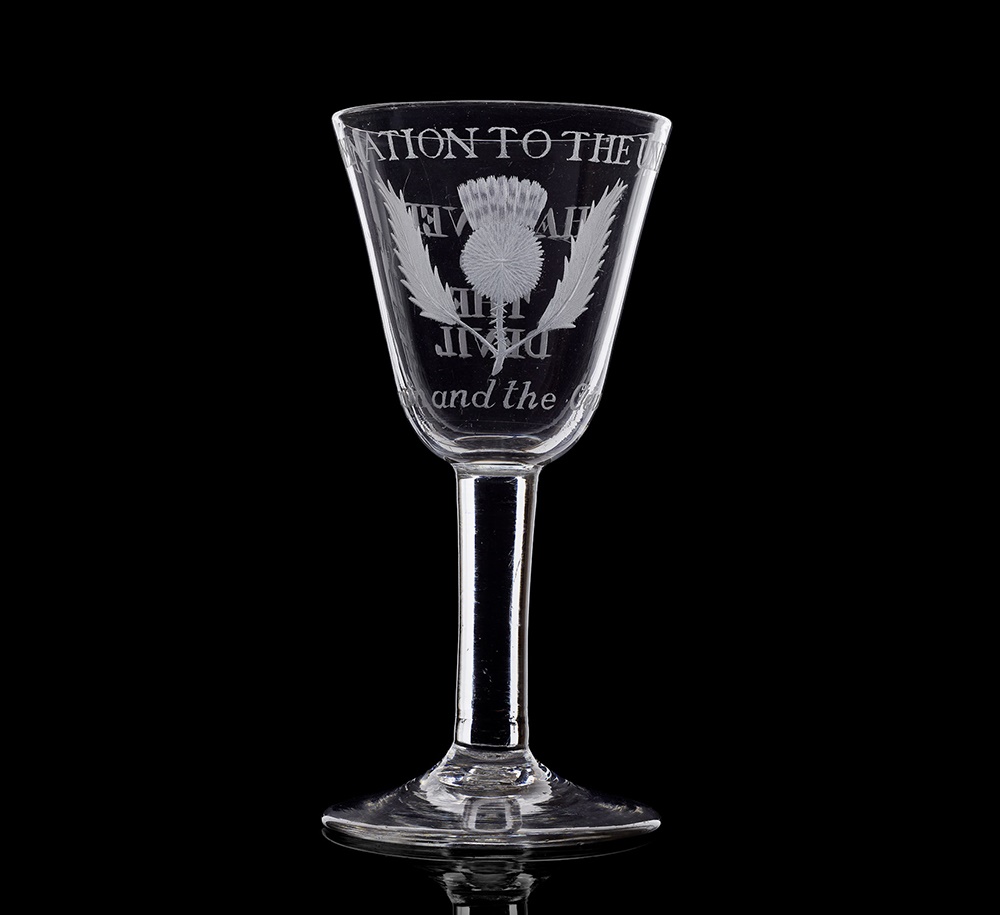 However, the smaller motto 'APPIN AND THE CAUSE' perhaps gives us the most insight. This must relate to the Stewart of Appin clan who were staunch supporters of the Jacobite cause from the earliest days. In commissioning the glass then they are proudly stating their support for the clan and reaffirming their commitment to the cause as if they are one and the same, something which could well have been ordered by the leader of the clan. Sadly provenance to support this theory does not exist. However, the apparent references to the Appin clan are highly unusual and are not known to appear on other surviving Jacobite glassware, thus positioning them as the likely patrons of this rare example.

Our specialist auction of Scottish Works of Art features a fine selection of Jacobite works, showcasing the cross section of the arts of the period that played such an important role within the Jacobite movement; from the traditional portraits, miniatures, fine silver, antique arms and rare manuscripts to the romantic and provoking relics of the rebellion and people within.