A Private Collection of Jacobite Works of Art

Our 14 August auction of Scottish Silver & Applied Arts saw a fine collection of Jacobite Works of Art, including the Creyke Family Miniatures, achieve a grand total of £65,000 including premium amidst spirited bidding at our Edinburgh saleroom.

The rare and fine pieces from a Private Collection of of Jacobite Works of Art (LOTS 457 - 474) were a highlight in our Wednesday 14 August auction of Scottish Silver & Applied Arts in Edinburgh. The collection featured the Creyke Family Miniatures, snuff boxes, seals, portrait miniatures & a gold mounted ring enclosing a lock of Prince Charles Edward Stuart's hair among many other historic pieces. We were delighted to bring these exceptional pieces to auction to achieve a fantastic grand total of £65,000 including premium.

Here, we take a closer look at a few featured highlights from the collection: 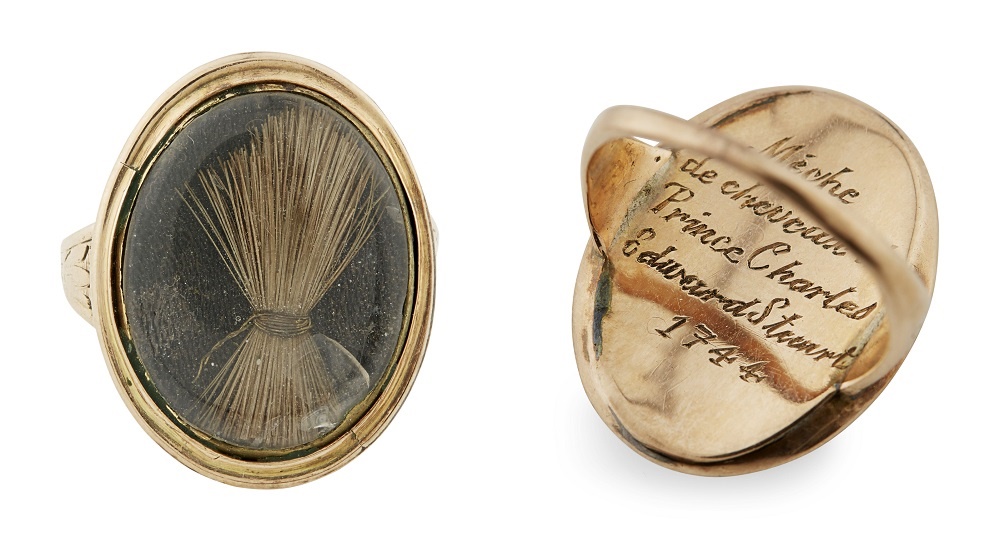 While various locks of Prince Charles Edward Stuart’s hair survive it is highly unusual to find one with a dated presentation and even more so to a date pre the launch of the ‘45 campaign. Given the date of thivs presentation, it appears this lock must have been given to a supporter while Charles waited to embark on his journey to Scotland from Dunkirk in 1744.

This portrait is a copy of the (now lost) original 1747 portrait in pastel by Maurice Quentin de la Tour. While the original is lost, various copies are recorded. This miniature appears to closely follow a copy by John Daniel Kamm in its composition and being landscape rather than the more traditional portrait alignment. These copies by Kamm were likely painted circa 1749 when George Watts, banker to Prince Charles, mentioned copies were being produced. This example closely matches this date and is probably after a Kamm original. 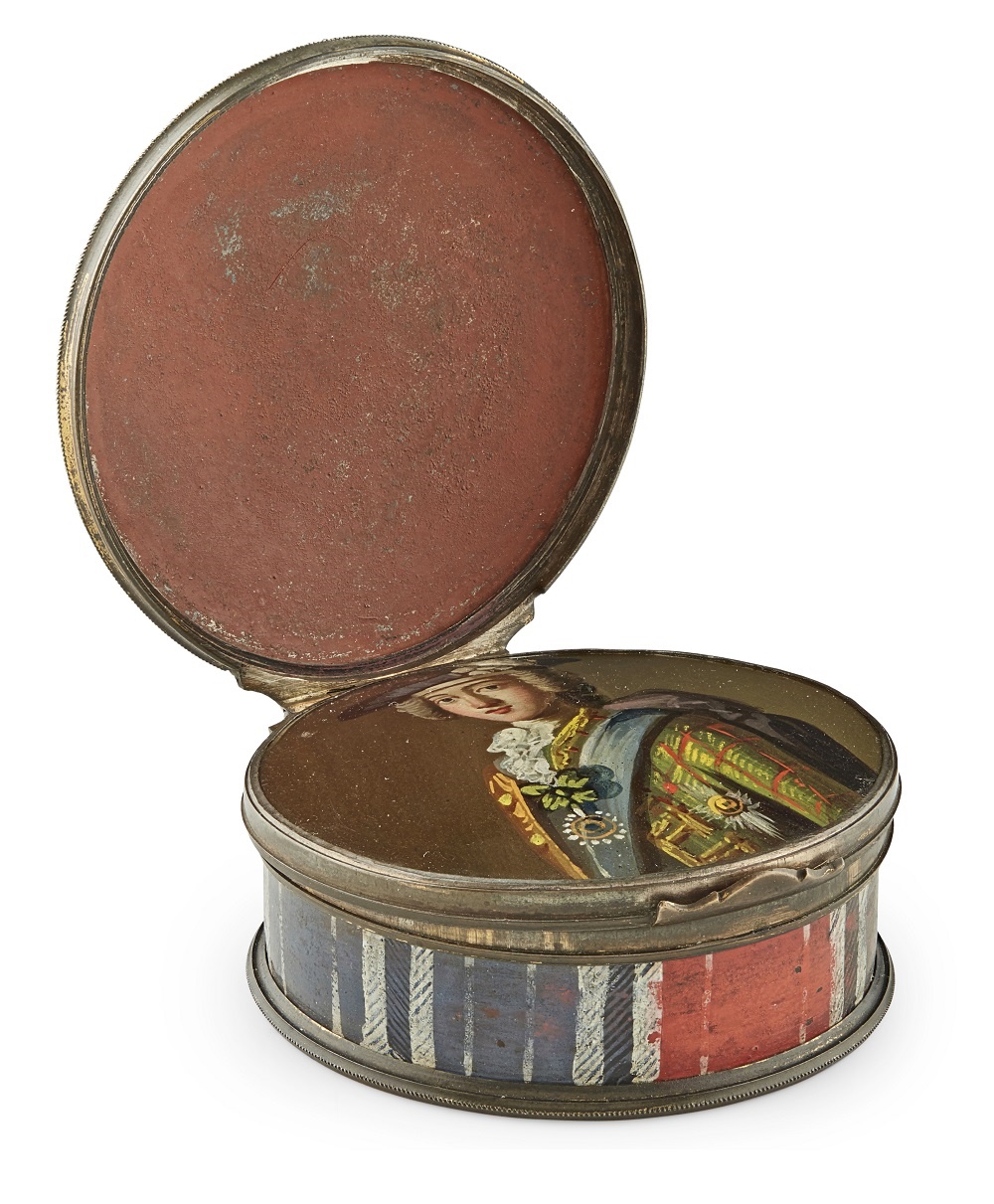 Hidden portrait snuff boxes such as this are amongst the most iconic Jacobite works of art. While they are a well recorded type, they are rare in any form. This example is in particularly good condition and finely enamelled. The portrait is a variant of the famous Sir Robert Strange example which likely date this piece to circa 1750.

The Creyke family heritage appears to stem from Danish routes although they are recorded settled and holding the title of Governor in Berwick under the reign of Edward III in 1340. The family seem to have been spread along the borders of Scotland, York and wider afield in Yorkshire. By the time of the Stuart uprisings their seat was, and had been since 1447, Marton Hall in East Riding.

However, their connection to the Stuart cause goes much further back than the 18th century and they are recorded supporting and indeed suffering for their support upon the execution King Charles I. At this time the family patriarch was Gregory Crekye (born 1595) and it is recorded that for his support he ‘suffered greatly for his devoted attachment to Charles I, and compounded heavily for his estates’.

Two of Gregory’s sons were also close adherents of the Stuarts. One being page to Queen Henrietta Maria and his eldest son Richard was commissioned by the Duke of Newcastle to guard the East Riding coast against the coming of William of Orange to over throw the Stuart King James II. In fact, it was Richard who personally delivered the fateful news to King James of William’s arrival. Setting in motion the Glorious Revolution and overthrow of the Stuart monarchy which would in turn create their supporters, the Jacobite’s.

It is either this Richard Creyke or his son Reverend John Creyke who must be considered the original owners of these fine miniatures. In either case they were staunch Jacobite’s who as the miniature of King James suggest could have been given this directly for their long and well recorded support. Of course it was not only this past support but the need for future support through the uprisings of the 18th century which the Stuarts hoped to guarantee.

The Creyke support is seen early in the century with Reverend John who after the Jacobite defeat at Preston was so despondent by this defeat he refused on the 6th May 1718 to take the Oath of Allegiance to King George I. By doing so he had to resign from St. John College Cambridge. Almost immediately he appears to have taken refuge not at the family seat but under the care of the 5th Earl of Winchelsea, Heneage Fincha. So close was their relationship he stayed there as his chaplain and librarian until his death in 1757.

This support was not only known locally but obviously met the ear of Prince Charles Edward Stuart, indeed he and Creyke may have had a more personal connection than is now understood. It is stated in an 1802 edition of Old Yorkshire that Prince Charles promised to Reverend Creyke that should he come to the throne that he would be granted the position as Archbishop of York. This obvious close connection tempts even further that these miniatures could in fact have been direct court gifts.

It should also be said in case any doubt is still cast on the Reverend John Creyke’s Jacobite credentials it is recorded that not only was he present to witness the deaths of the Manchester Regiment soldiers so brutally dealt with for their ‘crime’ of taking arms for the Jacobite’s. But he also wrote the speeches given on the gallows by two of their soldiers. These speeches were written for Thomas Syddall and Thomas Deacon of Manchester. It therefore seems highly likely he would have been present at Southwark Gaol to comfort and consult with other prisoners and likely gave religious clemency to many.

It would appear that these remarkable miniatures not only have a connection to a remarkable, and little known, Jacobite family but for their near 300 year existence have only been in the possession of two Jacobites, the Creyke family and one Private Collector.