Allan Murray was a gregarious Hong Kong banker and art collector whose extensive collection of Scottish paintings (covering the entire historical range from the 16th century to the present day) was well known. However his interests also spanned to a long-standing love for astronomy and the stars thanks to his boyhood spent in Gullane, East Lothian, where the big skies over the North Sea inspired a fascination in the heavens. This eventually manifested itself in Allan’s wide-ranging collection of telescopes, scientific instruments and technology, part of which is offered in Lyon & Turnbull's 05 April Fine Furniture & Works of Art auction.

Initially the collection was offered in its entirety to National Museums Scotland, which has gratefully accepted a number of important pieces (which will be associated, in perpetuity, with Allan and his wife Carol Murray); but a portion of this did not map on to the museums’ collecting policy, and over 20 important pieces then came to Lyon & Turnbull. Amongst these are the internationally-famous names of London scientific instrument makers of the late 18th century: (Jesse) Ramsden, (John and Peter) Dollond, and (Edward) Troughton & (William) Simms. There is a piece made by the eminent Dublin maker, Sir Howard Grubb, whose work at one point was viewed as the best by an international clientele, and served major large observatories on five continents. There is also a late instrument by the highly respected London maker, John Browning, possibly better known for his work in producing astronomical spectroscopes (for discerning out of what elements stars in faraway galaxies could be made). And there is also a group of telescopes constructed by makers based in the United States – from the renowned maker Alvan Clark (1804-87), of Cambridgeport, Masachusetts, to the slightly later Henry Fitz (1808-63), of New York City. 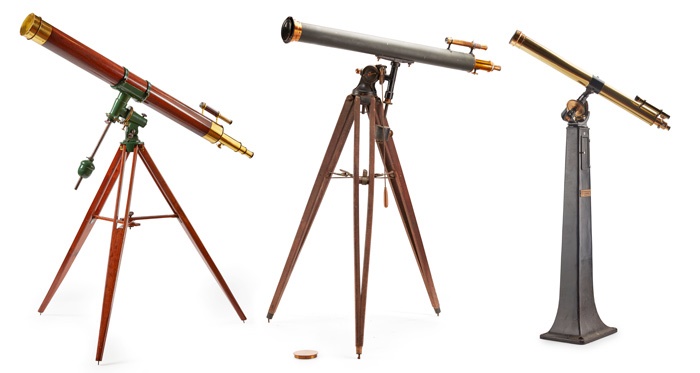 Allan enjoyed hunting down these rare and elegant items through the auction rooms but due to living in Hong Kong he relied on the advice he was able to get from knowledgeable friends: he was an exceptionally good collector because he listened carefully to recommendations and the guidance he was given. A longstanding member and contributing sponsor of the Antique Telescope Society from 1993, he welcomed fellow members with similar tastes to Hong Kong with his customary hospitality, so they could talk telescopes together: there are glowing memories of these convivial meetings. He was, of course, obliged to buy ‘sight unseen’ by the very nature of his distance from the salerooms (which, of course provided him with photographs, as well as information), but there was never any doubt as to who was in the driving seat when it came to the choice of items. Allan was putting together a fine selection of instruments made by some of the world’s greatest makers, and Lyon & Turnbull are very proud to present these pieces for sale in order that they can go on to grace the collections of today’s discerning collectors.