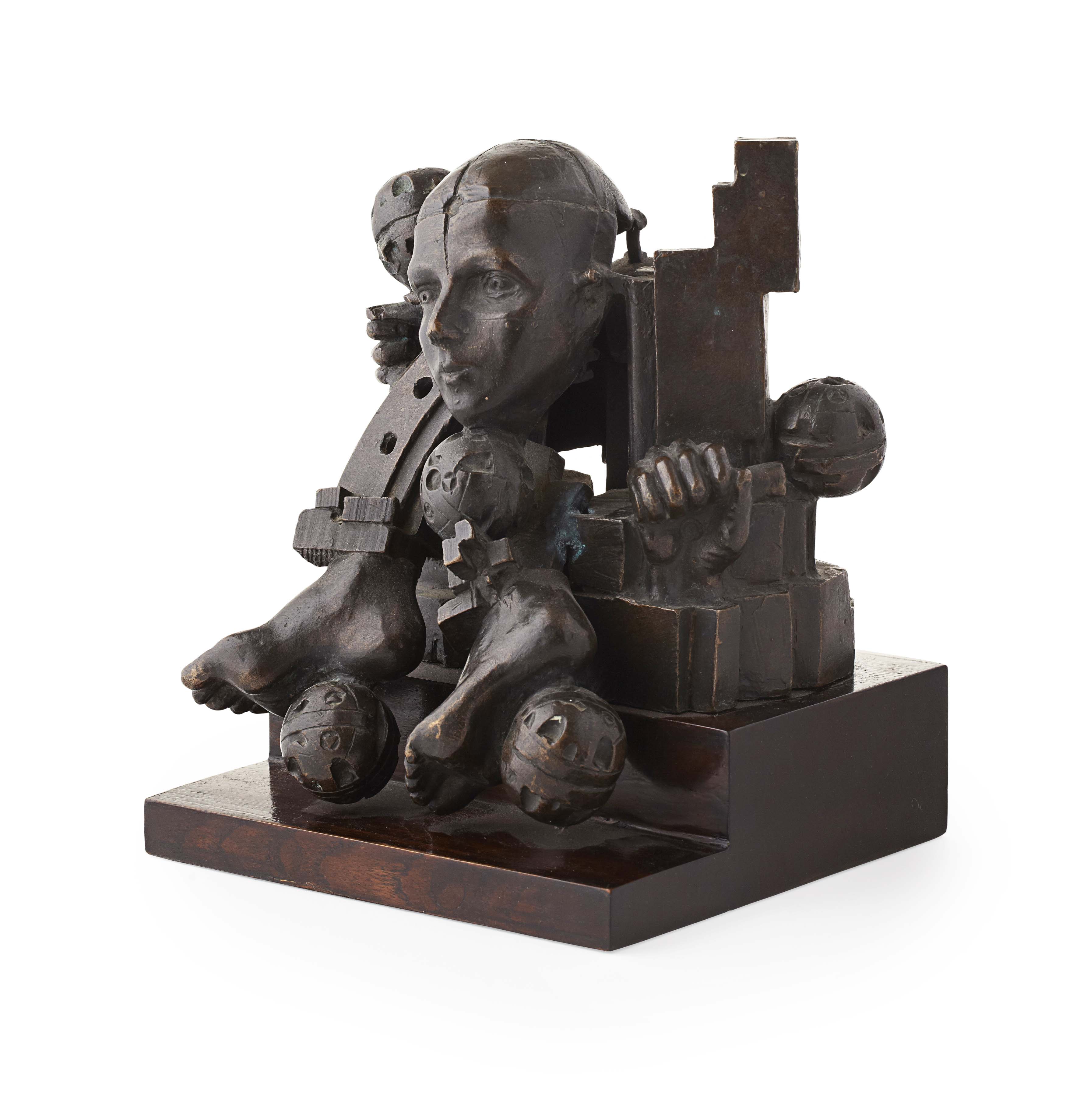 We were delighted to offer this work by Paolozzi in our Contemporary & Post-War Art auction on Thursday, 13 August. It truly embodies his distinctive aesthetic, marrying the artistic with the mechanistic and the primitive with the futuristic to evoke a sense of the surreal, treading the line between the sinister and the absurd.

The Leith-born and Slade School-educated Paolozzi moved to Paris in the late 1940s where he met artists including Brancusi, Braque, Giacometti and Leger, as well as members of the Dadaist movement. Though Paolozzi was clearly influenced by these important figures, his own style evolved to push the boundaries of collage, Pop imagery and the incorporation of ‘found’ objects.

This work is known as a maquette for Great Ormond Street, the famous London children’s hospital. Created in 1993, four years after The Head of Invention in ‘89, it was intended for a much larger run of casts which was never completed. Instead, a small number were made in bronze with a rich brown patina. As was often the artist’s want, many of the casts - including this piece - were gifted directly to friends and supporters. Paolozzi was a temperamental character and his relationship with galleries and dealers was generally short-lived, resulting in many of his works finding owners via this slightly unorthodox fashion.

Paolozzi executed many public commissions throughout his career, and notable examples include the mosaics at the Tottenham Court Road underground station, a sculpture of Sir Isaac Newton in the piazza of the British Library and a large bronze entitled The Head of Invention outside the Design Museum, London, to which this piece bears the closest relationship.

In early 2015, London Underground announced that some of the Tottenham Court Road murals would be dismantled as part of their expansion plan, and that there was currently no concrete plan for a new home. This sparked much debate in the press and artistic circles, about the importance and relevance of public art generally, and these mosaics in particular.

To tie in with this debate, we presented a stimulating panel discussion on Paolozzi and the artworks he created for the London Underground, specifically Tottenham Court Road Tube station, as part of our Spring events programme. Invited speakers for the lively evening included: Henry Fitzhugh – Former Director of London Underground, Catherine Croft – Director of Twentieth Century Society and Daniel F. Herrmann – Eisler Curator & Head of Curatorial Studies, Whitechapel Gallery.

In the last few weeks, it has been announced that a new home for the removed mosaics has been found. They will be returned to Paolozzi’s home city of Edinburgh, where they have been gifted to the University of Edinburgh by Transport for London.

"I am delighted that the University is able to provide a home for this work. The mosaics will be a very important addition to our Art Collection. We expect the murals to become an important part of the campus - a major draw for students and wider public. The possibilities for creative engagement through this project are hugely exciting." - Neil Lebeter, University Art Collections Curator

The mosaics will feature in a new undergraduate course at the university, Edinburgh Collections, as well as in conservation training. The artworks will be photographed and digitally mapped, allowing experts to virtually reconstruct the work before it is reassembled by students, researchers and ceramics conservators.

"We’re proud of the Underground’s artistic and architectural heritage, and understand our key role in preserving it. We have worked hard to preserve the Paolozzi mosaics in Tottenham Court Road, with the vast majority remaining in situ. Working with the University of Edinburgh, we now have a fitting home for the remainder. We are delighted that these pieces will have a new lease of life in the artist’s home city." - Eleanor Pinfield, Head of Art on the Underground

Dates for the Diary