Nick Curnow, Head of Paintings, investigates William Marlow’s inspiration and approach to painting, before offering this striking pair of his Italian landscapes in the next British & European Paintings auction on 18th May in Edinburgh.

Born in London, William Marlow trained in his native town under the topographical and marine painter Samuel Scott and also at the St Martin’s Lane Academy. In 1765 he visited the continent and undertook a prolonged tour of France and Italy, in the course of the trip making numerous drawings of classical ruins and the landscape, which provided the subject matter for a great many paintings produced after his return to England. Returning to London in 1768, Marlow took up residence in Leicester Fields, then a popular address for painters and in 1771, enjoying some success, was made a Fellow of the Society of Artists. In 1788 he began to exhibit at the Royal Academy and showed there regularly until 1807. 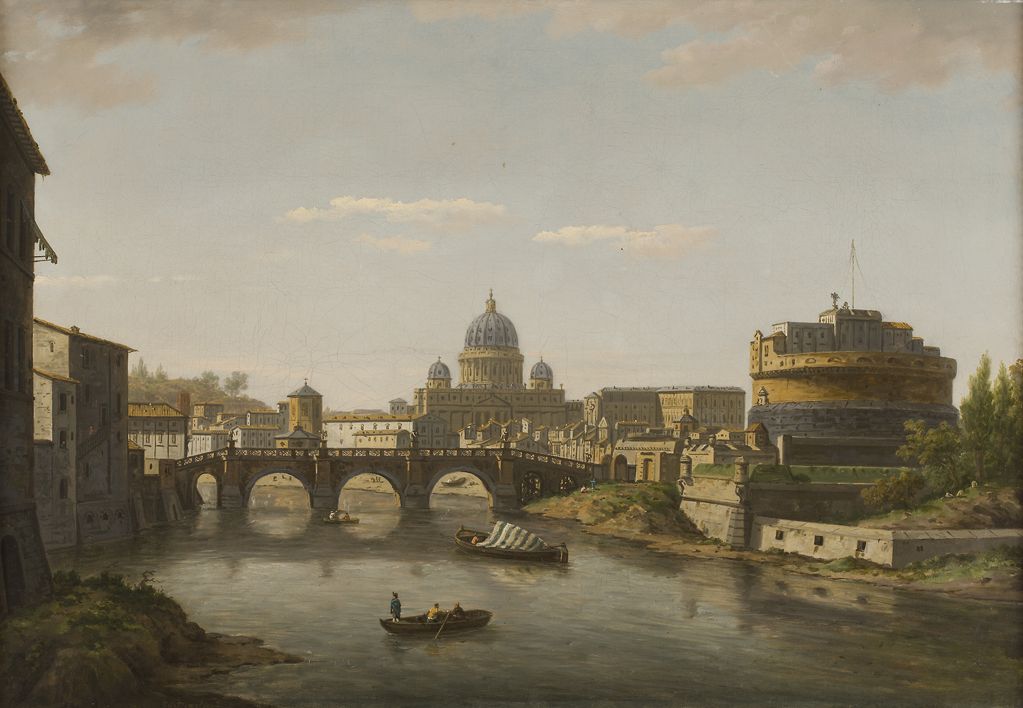 The chosen standpoint in the view of Rome shown above, looking along the Tiber towards St Peter’s, with the Castel Sant’Angelo on the right, was a popular choice for painters on the Grand Tour, also featuring in notable works by Joseph Wright of Derby and Jonathan Skelton.

Marlow painted in both oil and watercolour, and was strongly influenced by both Canaletto and Richard Wilson. His favoured subjects were British rustic landscapes, although he alternated these with the popular pictures worked up from his Italian sketches. Some of the latter were also produced as etchings, along with several views of the Thames. Marlow also produced a number of watercolours illustrating William Chambers’ designs for buildings at Kew Gardens, which were later engraved. In 1795 a set of six of his Italian views was also published. It says much for his talent that Marlow was able to capture both the brilliant sunshine of the Campagna and the rather more restrained lighting demanded in depictions of British landscape and cityscape. On occasion he even married the two together, such as in a painting now in Tate Britain, Capriccio: St Paul's and a Venetian Canal (c.1795-1797), a fantasy in which the great cathedral finds itself relocated to a Venetian city setting.

His view of the Bay of Naples takes a closer viewpoint than that chosen by many artists and offers an intimate portrait of one of the Grand Tour’s cultural metropolises. The central focus is the dome of Santa Maria degli Angeli at Pizzofalcone. Like Vernet before him in the 1740s, Marlow adds vignettes of fishermen drawing in their nets and a fishing boat and it is possible that Marlow might have known the French artist’s hugely successful views of the bay.

Something of a polymath, Marlow latterly, in the late 1780s, turned his hand to making scientific instruments. He is also said that he designed the great seals for the first thirteen United States of America. In the course of his career, Marlow exhibited a total of 125 paintings at the Society of Artists, two at the Free Society of Artists, and 25 at the Royal Academy.