Forthcoming in our next Decorative Arts: Design since 1860 auction 11 April will be the select items from The Klein House or High Sunderland, a Scottish Borders property designed by architect Peter Womersley (1923-1993) for the textile designer, Bernat Klein (1922-2014) in 1956, with the later addition of a studio wing in 1982. A low, single storey building with large glass windows and a makore timber frame, the building sits in a picturesque location with views across the green fields, and reflects innovative design of the mid-century from every angle.

The selection of items on offer will include studio pottery pieces by Lucie Rie and Berndt Friberg, glass, paintings and furniture. Also included will be the original architectural plans for the house as well as an architect’s model of the studio, also designed by Womersley for Klein in 1972. 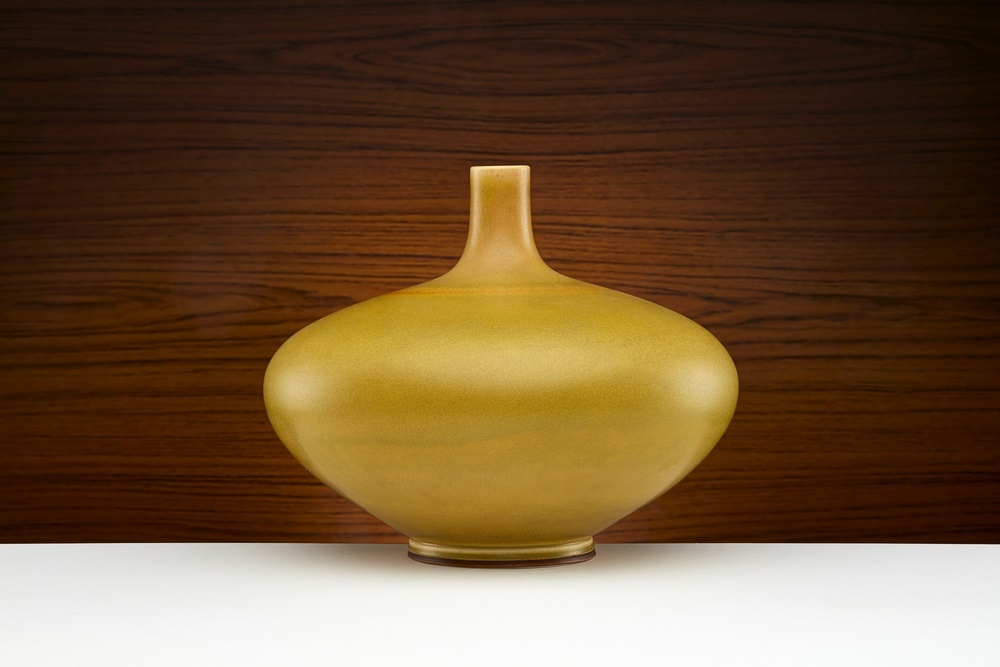 Peter Womersley was known for various designs within Scotland, particularly in the Borders. His first domestic design was Farnley Hey in the Pennines in 1950, presented to Womersley’s brother John as a wedding gift, which won a Royal Institute of British Architect’s medal. It was this property, seen by Bernat Klein and his wife, which led to the commission of High Sunderland.

Womersley’s work has been described as “exacting” and an “acquired taste” but there is no doubt when viewing his buildings that they reflect innovative mid-century design: open expansive cubic and geometric forms, incorporating the use of exotic hardwoods, glass and rather utilitarian materials like concrete, often situated in picturesque settings and landscapes with light flooding the interiors. Womersley’s work, whilst critiqued, also has strong admirers: Rowan Moore, for example, said in his article about Womersley, that he was “one of the best architects of the 20th century, and…one of the most overlooked. His buildings are adventurous but poised; lucid, brave in conception and considered in their detail.” As a person he was held to be social, charming and a lover of travelling, but private and elusive. This may have contributed to his work not getting as much attention as it deserved: he wasn’t a big networker and he didn’t join multiple organisations or movements to promote his architecture.

“One of the best architects of the 20th century, and…one of the most overlooked. His buildings are adventurous but poised; lucid, brave in conception and considered in their detail.” Rowan Moore

His designs reflect his training at the Architectural Association in London, influenced by the Bauhaus tradition, and nod quite firmly to the American contemporary style popular in California in the mid-century period. High Sunderland is no exception to these influences, being an expansive open space, separated by varied floor levels, secret doors and inbuilt cupboards, residing in a green space. Such is the importance of this house that it is a category A listed property: a rare honour awarded to a post-war building. Historic Environment Scotland lists the house as “a signature work embodying his [Womersley’s] characteristic geometric modular design…surviving in its original condition.”

Its owner Bernat Klein was a very fitting occupant for the building, as a designer himself, he was much involved with the local art scene within the Borders of Scotland. High Sunderland was used as a canvas of sorts for Klein, who as well as keeping the original fittings and fixtures of the house to this day, incorporated his specially designed textiles into his home. He supplied textiles to various haute couture designers including Chanel, Dior, Balenciaga and Yves Saint Laurent, and in the 1960s set up his own cottage industry of hand-knitters, before creating his own clothing range in the 1970s. He was inspired by nature, so the rural location of High Sunderland certainly seems like it was a perfect fit for his work.