Uncover 50 years of Modern British sculpture this April at Lyon & Turnbull, reflecting the height of a revolution in the British movement in the middle of the century in our flagship 20th Century cross-category auction ‘Modern Made’ which will stream live on 30 April with viewing at the Mall Galleries in London in anticipation.

Discover pre-war works by Jacob Epstein who rebelled against the idea that sculpture should be pretty and Leon Underwood’s June of Youth exploring the expression of rhythm and dance in sculpture striving towards the limitations of the sculptural medium. Immediately after the war works by Elizabeth Frink and Robert Clatworthy reflect a new generation of sculptors striving to deal with the despair and collective guilt of surviving war with powerful, tortured and battered human and animal forms, executed in pitted bronze and welded metals expressing emotions tied to these anxieties.

This fascinating exploration takes in two mature works by Lynn Chadwick of cloaked couples that are imposing and impart a mysterious essence, to a wing sculpture by Robert Adams showing the influence of Henry Moore with his sensuous treatment of abstracted forms, to a generation imbued with a new hope and optimism in the Pop Art of Eduardo Paolozzi and Clive Barker.

Leon Underwood was a significant figure in twentieth-century British sculpture, and a teacher who influenced generations of artists. His works can be seen in the Victoria & Albert Museum, Tate Britain, and the Ashmolean Museum, Oxford. While his reputation was eclipsed by those of his students Henry Moore and Barbara Hepworth, Underwood can now be appreciated as a brilliant and versatile artist in a wide variety of media.

Underwood trained as a painter at the Royal College of Art before the First World War, and at the Slade School of Art after demobilisation. It was only after the War that he started to work on sculpture. The human torso was a favourite subject in the early years of his sculptural practice: he carved female torsos in Tournai slate (1923), Mansfield sandstone (1923-24), Roman marble (c. 1925-30) and Ancaster stone (c. 1925-32).

The running torso “Flux” (1924) was modelled in clay and cast in editions of brass and bronze. Metal allowed a more fluid composition, and made it easier to capture movement and gesture. During the 1930s Underwood gradually abandoned stone carving, and increasingly worked in bronze. “June of Youth” recalls his earlier torsos in stone, but the figure’s forward and upward movement exploit the properties of bronze sculpture. It has been suggested that the artist’s daughter Jean modelled for this piece, but that seems implausible: she was only a child when Underwood created this celebration of young womanhood.

After selling a bronze “June of Youth” to the Tate Gallery in 1938, Underwood wrote to the director, John Rothenstein, “I always give ‘literary titles’ to my works”. A possible source for the title is Helen Keller, who used the phrase “the June of her youth” in her 1929 memoir Midstream; but the analogy between the months of the year and the stages of life is a common trope, and the sculptor need not have had a specific quotation in mind. Whatever its inspiration, “June of Youth” held a special place in its maker’s affections, and he depicted it in the background of a self-portrait painted in 1949.

Underwood made just a handful of works in cast terracotta, but it was in this medium that “June of Youth” was first realised. The critic Eric Newton saw it in this form, and was deeply impressed.

The terracotta “June of Youth” that we see here is numbered IV: the fourth from an edition of four. It is signed with Underwood’s usual signature (“Leon U”), and dated ’38. This must be the date of this specific cast, as a terracotta version was exhibited at the National Society of Painters, Sculptors, Engravers and Potters as early as 1933. The title is lightly inscribed, running up the outside of the left thigh. Incised circles mark the figure’s nipples and navel, with fine lines separating the abdominal muscles and defining the belly.2

Bronze, however, was probably the medium Underwood had in mind when he conceived this dynamic figure. There appear to have been seven bronzes cast, though Underwood’s numbering of his editions can be unreliable. The earliest casts date from no later than 1937; a final cast, inlaid with lines of silver, was made in 1969.

The bronze offered here is not numbered or dated. The fact that it includes the figure’s chin and mouth might indicate that is an early – perhaps even the first – cast, as later casts end at the neck. The chased decoration, added by hand, makes it (as a label on the base states) “unique”. The nipples and navel are emphatically marked, as in the terracotta. The rest of the markings look like foliage – in keeping with the “June” of the title. However, a zig-zag line above the groin could be read either as an outline of the figure’s pubic hair, or as flames. On the latter reading, the shape immediately above it could be interpreted as a phoenix – a subject that Underwood evoked in his bronze “Phoenix for Europe” (begun in 1937). It was this cast of “June of Youth” that was illustrated in Christopher Neve’s 1974 book Leon Underwood.

Lynn Chadwick (1914-2003) is widely considered to be one of the most important British sculptors of the twentieth century, often heralded as the successor to Henry Moore. Born and raised in London, Chadwick did not have any formal art education and began to transfer his experience as an architectural draughtsman to his sculptures from the end of World War II, during which he served as a pilot. In 1956, a few years after he began to cast in his iconic bronze, Chadwick’s career received immense acclaim when he won the International Sculpture Prize at the Venice Biennale, surpassing the noted favourite Alberto Giacometti and becoming the youngest ever recipient of the prestigious prize.

In 1971, he opened his own foundry at his estate at Lypiatt to produce small bronzes and jewellery. Known for his keenness to blur the lines between abstraction and figurative work, from 1973 we note a development in his bronze figures as they begin to be clothed in sumptuous drapery, adding a mysterious and elusive quality to them. These cloaked, figurative pieces became an important part of his oeuvre in the 1970s and into the 1980s and remain instantly recognisable, as he pushed the boundaries between abstraction and naturalism.

Chadwick’s exploration of seated figures in the early 1970s, such as Sitting Couple from 1975, marks an important development in his work. Always a keen observer of human movement, his figures are more elongated and elegant as they become more erect, in contrast to his earlier works. In a book on the artist’s life, his wife Eva Chadwick discusses the importance of movement in his work with art historian Dennis Farr:

“Chadwick has always been intrigued by movement, either actual or implied, in his sculpture. From his early mobiles to his dancing Teddy Boy and Girl series of the 1950s to his cloaked walking women with windswept hair of the 1980s, he has explored figures in motion. Sometimes their cloaks and draperies flow out in the wind from behind them, or are caught by a gust and wrap themselves around the figures. This essentially lateral progression gives place to a vertical rhythm in his groups of, usually two, figures.”
(D. Farr & E. Chadwick, op. cit., 2006, p. 15).

However, the importance of mass remained paramount to these groupings in the way in which the couple join to become one solid unit. This abstraction of form and elegant elongation continued towards the 1980s, which is visible in works such as Standing Couple from 1980. The long, fluid cloaks which shroud the couple add to the visually joining of the figures as one, all the while maintaining Chadwick’s signature signifier of maleness (oblong head) and femaleness (triangular head) to contextualise the couple.

Figures from this period of Chadwick’s work represent his artistic maturity and allow the viewer to import their own narrative on these anonymous figures. Like the artist’s larger outdoor sculptures, the works offered here have an eminent presence and command the attention of those around them due to their imposing form and mysterious essence.

We would like to thank Sarah Chadwick for her assistance in cataloguing the current work.

By 1970, Eduardo Paolozzi was distancing himself from the ‘Pop Art’ label, feeling it conjured up images of ‘diving into a barrel of Coca-Cola bottles.’ He was engaging with darker subject matter in a way that he felt extended the tradition of Surrealism. Close friends with the science-fiction writer J.G. Ballard, both men had a particular fascination with car crashes, with Ballard specifying that he was interested in the modern day engagement with violence, which mainly took place in the mind, rather then in our physical responses. He felt the car crash was often the one act of violence that the modern day person would physically experience in their life, and even this dramatic impact is between two machines. Interestingly, a shining symbol of modern success and achievement, the car, becomes a destructive and dangerous force in our lives, dream turns nightmare.

Crash Head was produced for Paolozzi’s Tate retrospective in 1971. Eduardo was particularly interested in technology and man’s relationship with machines, often fusing human and machinery elements. In Crash Head, he uses the head of a safety test dummy as a model and then applies machine elements; a chunky chain affixed to the head and Frankenstein-esque bolts to the neck. His choice of the model used in car safety testing and demonstrations is a direct engagement with the idea of the violence a car can inflict and an explicit set-up of man versus machine. Yet the quality of the materials, attractive contrasting silver and bronze colours and sleek finish of the sculpture belie these darker undercurrents.

The sculpture was produced in an edition of ten. There is one in the National Galleries of Scotland collection, bequeathed by Gabrielle Keiller in 1995, and another is held in the collection of the Stirling Smith Art Gallery & Museum, gifted by The Scottish Arts Council in 1988.

Viewing in the Mall Galleries | London 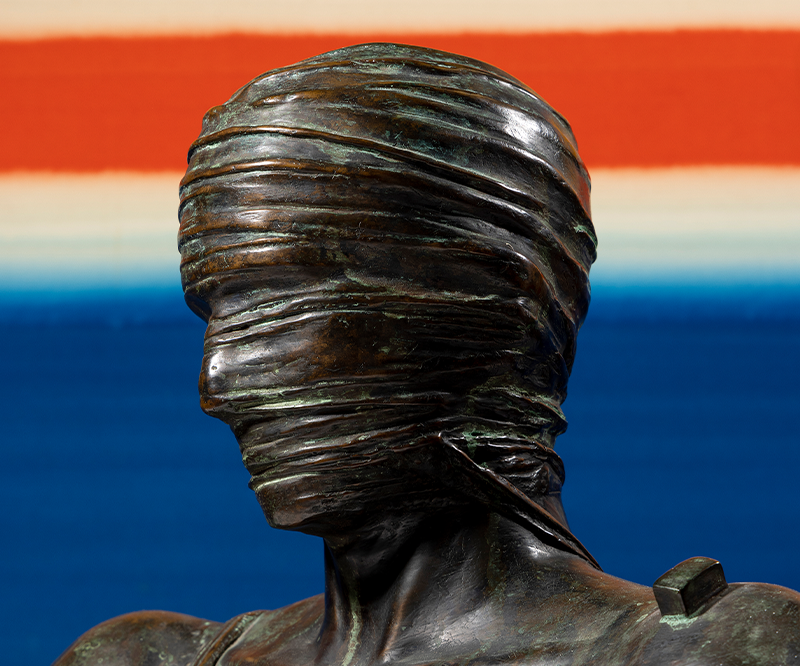